Ayatollah Khamenei has defended the chant "Death to America" as being directed at "evil" US leaders and not towards the American people. He also said Europe could not be trusted. 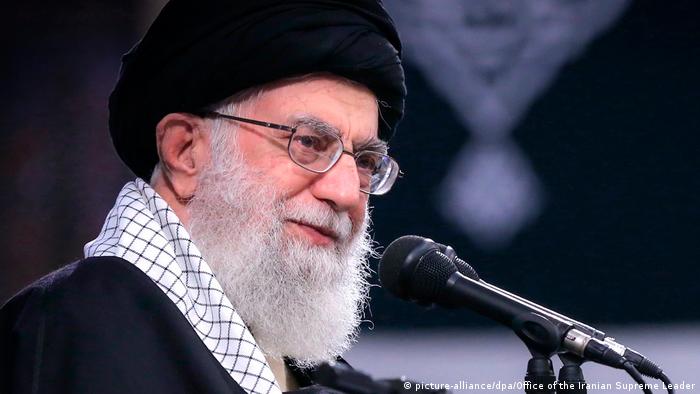 Iran's supreme leader has clarified the meaning of a standard chant at anti-US rallies, saying the slogan "Death to America" was directed at the US's leaders, not its people.

In remarks marking the 40th anniversary of the Islamic Revolution, which ousted a Western-backed monarchy, Ayatollah Ali Khamenei told air force officers that the "US regime is the embodiment of evil, violence, crisis-making and a warmonger."

The 79-year-old went on to say: "The US is a wicked enemy, united with the Zionists [Israel] and the reactionary regimes of the region [Saudi Arabia and Gulf Arab monarchies]."

Read more: Angela Merkel: Israel has 'right' to defend itself against Iran in Syria

"Yemen is one example of it. The Saudis are committing the crimes. But the US is their partner in crime," he said.  "They target hospitals, bazaars, and gatherings of people. They are criminals. This is the face of the United States."

Trump references Iran in State of the Union

Trump recently pulled the United States out of a 2015 nuclear deal and reimposed sanctions on Iran.

In his State of the Union address this week, Trump said among other things: "My administration has acted decisively to confront the world's leading state sponsor of terror — the radical regime in Iran."

"We will not avert our eyes from a regime that chants 'Death to America' and threatens genocide against the Jewish people," Trump said.

European parties to the nuclear accord have tried to save the deal, establishing a channel to facilitate trade despite issuing a statement of concern over Iran's ballistic missile program and influence in the Middle East.

"Even now, regarding Europe, I am not calling for cutting ties with them. However, the point I am trying to make here is about trust."

US support of Israel to continue despite Syria pullout, says Pompeo

The US secretary of state has reassured Israeli Premier Benjamin Netanyahu that Washington still supports his country. Pompeo's comments reflect unease caused by Donald Trump's plans to withdraw US troops from Syria. (01.01.2019)

The Israeli Defense Forces have hit several Iranian targets near the Syrian capital Damascus. An Iranian official has threatened retaliation against Israel, saying his forces are ready to "wipe it off the earth." (21.01.2019)