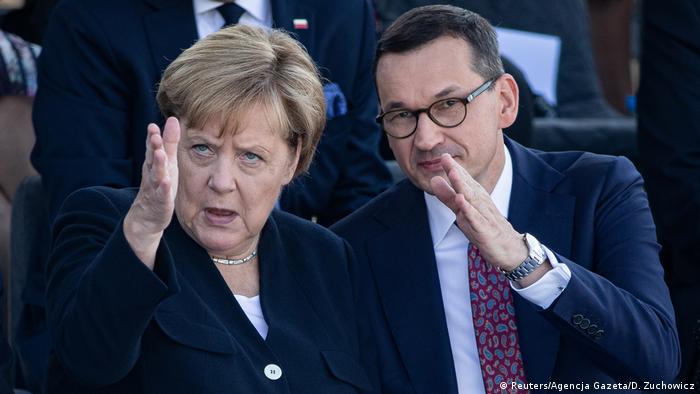 "We don't need Britain to show disunity." French President Emmanuel Macron put his finger on it as the EU's budget negotiations stalled at the end of last week, the standoff exposing rifts between countries in the North and South of the now 27-member bloc and between East and West.

The so-called Frugal Friends (the Netherlands, Austria, Sweden and Denmark) want to lower the new seven-year budget to 1.00% of gross national income (GNI), while Polish Prime Minister Mateusz Morawiecki wants the EU budget for 2021-2027 to increase to 1.3% from 1.16% in the budget period that expires at the end of 2020.

European Council President Charles Michel's 1.074% (and later 1.069%) compromise was rejected by both sides. The Frugalistas have the support of German Chancellor Angela Merkel. Germany, the EU's biggest contributor, has said it is prepared to accept a bit more, but that 1.074% is too high.

"I wouldn't call it a backlash," said Friedrich Heinemann, a professor at ZEW (the Liebniz Center for European Economic Research. "I think there is a readiness to continue the funding of the EU budget on its current generous levels. But net contributors want to send a clear signal that there are limits to the burden," he told DW.

A second key question is how to fill the €75 billion ($81 billion) funding gap created by Brexit. Britain was the second-biggest net contributor to the budget after Germany, at around 7.8 billion pounds (€9.2 billion, $9.9 billion) per year. To help fill the Brexit gap, the Commission has also proposed ending rebates on budget contributions that many of the net payers now get. Germany, the Netherlands, Austria, Denmark and Sweden all have their own rebates and want to keep them. The five countries' rebates were — in current prices — worth €6.4 billion in 2020, according to European Commission figures, with Germany the biggest recipient at €3.76 billion. 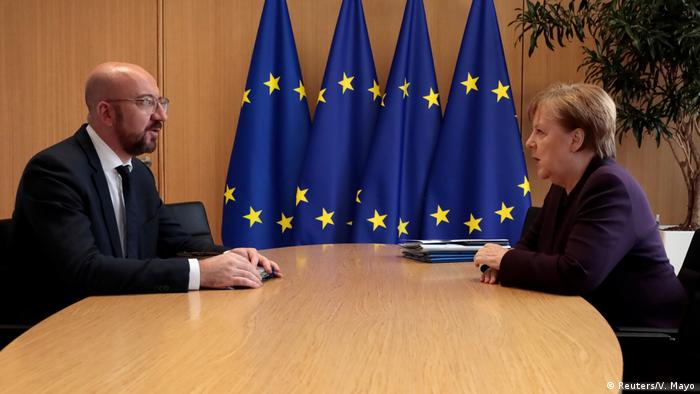 Chancellor Angela Merkel has said Berlin is prepared to pay a bit more, but that Michel's compromise is too high

A third issue are cohesion and agriculture funds, which together take up over 60% of the budget. The Commission proposed €41.3 billion for cohesion funds in the 2021-2027 period, down from €63.4 billion for the 2014-2020 period. The overall net cut in cohesion funds would be around 12%, although some member states stand to lose up to 24% of their EU subsidies. Michel's proposal would adjust that by diverting money from richer to poorer regions. According to the European Commission's proposal, the Czech Republic and Hungary would get 24% less for cohesion policy than in the 2014-20 period, Poland 23% and Slovakia 22% less. The cohesion countries, especially from Central and Eastern Europe, where over 85% of public funds are financed from EU money, say the cuts are arbitrary.

Michel has also included €7.5 billion new money to fund the greening of the economy. To get reluctant countries like Poland on board, the EU made expensive promises to help by emissions-heavy regions adjust. But some see the so-called 'Just Transition Fund' as a way for net contributors to regain some funding lost elsewhere.

"Negotiating a budget deal is not a purely arithmetical exercise. Rather, it must be a translation of political priorities into a financial framework," Morawiecki wrote in a recent opinion piece in The Financial Times. The prime minister said the current budget size, at 1.16% of the EU's GNI, should be a starting point for negotiations. As one of the "Friends of Cohesion," Morawiecki opposes cuts to the Cohesion Funds, which support members whose GNI per inhabitant is less than 90% of the EU average.

Morawiecki has argued that there is a strong relationship between gross contributions of EU member states and the benefits they accrue from the single market, with at least 50 cents in every euro invested in the cohesion countries going back to the net contributor nations through investment and tenders.

"This means that focusing on net balances when considering the EU budget is misleading, as it does not reflect the true benefits and costs of integration," Morawiecki wrote. He gave the example of the Visegrad Group (V4) countries, comprising the Czech Republic, Hungary, Poland and Slovakia, which in 2010-2016 received net funds from the EU of 1.5-4% of their GDP.

However, the outflow of dividends and property incomes from V4 to investors located in 15 countries of the "old" EU was 4% - 8% of the V4 countries' GDP in the same period. "The single market lifted trade barriers and opened access to Central and Eastern European markets," Morawiecki wrote. "We should show how cohesion policy benefits net contributors to the budget," he went on, adding that implementation of the 2007 to 2013 cohesion policy in the Visegrad countries was worth €96 billion in increased exports and direct capital benefits to the EU15, including €23 billion for the 'frugal four' of Austria, Denmark, the Netherlands and Sweden.

"Deep cuts to both the cohesion policy and the Common Agricultural Policy (CAP), for instance, cannot be justified. The burden of such cuts falls disproportionately on poorer countries in Eastern Europe," he wrote. "New areas of spending, like research or migration, defense or innovation are important policy areas, but they cannot be at the expense of cohesion and the common agriculture policy," said Morawiecki.

Morawiecki also rejected an idea of replenishing the 2021-27 budget with part of national proceeds from carbon emissions trading through the Emissions Trading System (ETS). Poland has been making efforts to secure several hundred million euros from the EU's Cohesion Policy for 2021-2027 for new gas infrastructure, arguing that such investments will drastically reduce CO2 emissions.

"However, the EU also reduced the availability of skilled people in Poland with free movement, negative for Poland. And for those net contributors not wanting immigration, developing the new members is also a way to reduce further migration," he said.

"But that is not for me the key point," according to Nunez. "The key point is that the funds which benefit the wealthier member states may well have a bigger impact per euro," he went on. Support for financial instruments is also successfully used by the advanced old member states, and there again the attraction of other investors and the returns may well be higher than in new member states, Nunez believes.

"I do not believe that a transfer of a treasury euro through the EU budget (that has a redistributive element in any case) results in a financial loss for the net contributors, and the kind of impact this funding has also benefits net contributors," he said.

"The budget talks are often miscast as a showdown between whining Eastern and Central European countries asking for more cash and frugal Northerners insisting their generosity has limits," Clotilde Armand, a Romanian MEP and member of the budget committee, has argued.

"The richer countries paint themselves as charitable souls and criticize Eastern European voters for electing Euroskeptic autocrats who pocket large EU checks while railing against Brussels. But look at the bigger picture and a different story unfolds. Much of the wealth in Europe flows from poorer countries to richer ones — not the other way around. Start with the brain drain. Europe's periphery is haemorrhaging young bright workers whose education was paid for by taxpayers in their home countries."

Indeed, between 2009 and 2015, Romania lost half of its doctors and Poland lost at least 7% of its nurses and physicians in a decade.

Furthermore, the profits Western European companies make in Central and Eastern Europe outstrip the public funding transferred to the East, Armand argues. From 2010 and 2016, Hungary, Poland, Czech Republic and Slovakia received EU funds roughly equivalent to 2%-4% of their GDPs. But the outflow of profits and property incomes to the West from these countries over the same period ranges from 4%-8% of GDP, Armand argues. "These days, French voters may be fretting about Polish plumbers, but eastern European voters are getting nervous about French chief executives," Armand notes.

"Moreover, if we would count the influx of immigrants to the Dutch labor market (for example, 185,000 Poles and more than 330,000 immigrants from "net receivers") they created approximately €15 billion of value added to the Dutch economy in 2018 (almost 2% of GDP), which is a bit more than the €7 billion contribution that the Netherlands pays, and still more than the possible €10 billion under the European Commission's plan," according to Piotr Arak, director of the Warsaw-based economic think tank PIE.

For the first time, a new tool will be introduced into the EU budget designed to make sure EU money is spent correctly. Denmark, Finland, France, Germany, the Netherlands and Sweden say they will veto any framework if it does not link the distribution of funding to respect for the rule of law. The compromise forwarded by Michel introduces a mechanism that focuses on protecting "the sound implementation of the EU budget and the financial interests of the union," but does not promise semi-automatic sanctions, as originally proposed by the European Commission.

"The problem is also that the quality of spending is controversial. Increasingly money is flowing into countries that like Poland or Hungary are characterized by weakening institutions, increasing doubts about the independence of courts or free media. This are bad preconditions for efficient and transparent spending," Heinemann said.

Asked if the Polish government's claim it is the victim of 'politics' (EU funds used as leverage for rolling back on judicial reforms) is justified, Heinemann said: "There is clear context. European solidarity has many dimensions. It includes money but also sharing other responsibilities e.g. for refugees that seek shelter. If Poland rejects one type of solidarity it cannot seriously expect that this is without consequences for the monetary side of solidarity."

"Such a claim is probably technically speaking valid," Wojciech Paczynski, an ex-Polish official based in Brussels, said. "It's also rather meaningless. The whole negotiation is a game where politics is present all over the place, including domestic politics of various countries.

What I think is fairly certain is that the Polish government's measures negatively affecting the domestic judicial system have taken their toll not only on legal certainty of Polish citizens and businesses but also on the international position of Poland. This has weakened Poland's negotiation position on many fronts including the EU budget. Poland will pay a price for this in the next budget."

My Europe: Orbanism is sweeping across the continent

Illiberal democracies are spreading across Europe. But what we are witnessing on the continent today actually originated in China and Russia, says journalist Norbert Mappes-Niediek. (16.06.2018)