The EU is prepared to play ball on a "unique" trade deal with the UK, the European Commission president has said. But she stressed that any deal comes with "obligations from both sides." 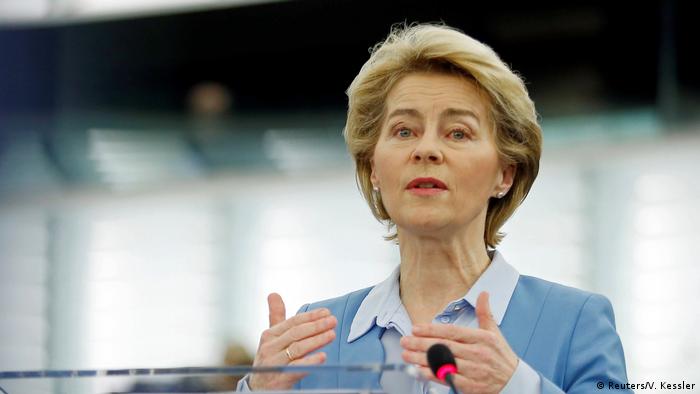 The EU is prepared to offer the UK "something we've never offered before" in terms of a trade agreement, European Commission President Ursula von der Leyen said on Tuesday, but not without demands of its own in return.

Speaking before the European Parliament in Strasbourg, von der Leyen opened the floor for a day of what are expected to be tough negotiations about the future of trade between the bloc and the recently departed UK.

"A trade system that is open on one side, and is fair on the other," she said.

The Commission president praised current trade agreements held with Japan and Canada, going on to say that the EU was prepared to offer the UK "something we've never, ever offered before to anyone else."

The bloc envisioned a deal free of tariffs and trade quotas for all goods, the president said.

EU: 'No illusions' on financial servcies

"A new model of trade, unique access," she continued. "But of course this requires corresponding guarantees on fair competiton and social, environmental and consumer standards."

All trade agreements come "not only with rights, but with obligations from both sides," she said.

Regarding financial services — a key sector for the UK economy — Michel Barnier, the EU's chief negotiator for Brexit and post-Brexit relations, pointed out that the UK should have "no illusions on this issue; there will be no general, global or permanent equivalence on financial services."

Earlier the UK's chancellor of the exchequer, Sajid Javid, said in an op-ed for business daily City A.M. that Britain was keen to develop a "durable relationship" with the EU on financial services. He stressed the need "to address the longterm needs of industry for a reliable equivalence process," referring to the EU's framework for bloc-wide access to financial markets.

Javid believes achieving equivalence should not be "complicated," saying regulations should be "compatible" but not necessarily "identical."

Von der Leyen said she was surprised, however, that Johnson recently mentioned the "Australian model," as the EU does currently not have a trade agreement with Australia, but was looking to change that.

"We just are in the moment where we are agreeing with Australia that we must end this situation and we are working  on a trade deal with them," adding that "of course the UK can decide to settle for less but I personally believe that we should be way more ambitious."

Mutual trade ambition and a suitable agreement would "trigger an upward dynamic competiton" that would benefit both parties, she said, before handing the floor over to European lawmakers.

The UK left the EU on January 31 after 47 years of membership.

UK Prime Minister Boris Johnson is set to outline an uncompromising stance on post-Brexit trade talks with the European Union. The EU and the United Kingdom have until the end of the year to seal an agreement. (03.02.2020)