Britain's economy has so far avoided a disorderly EU exit but will likely continue to see a drop in investments. London's "cake-and-eat-it" Brexit strategy means the next cliff-edge moment is never too far away. 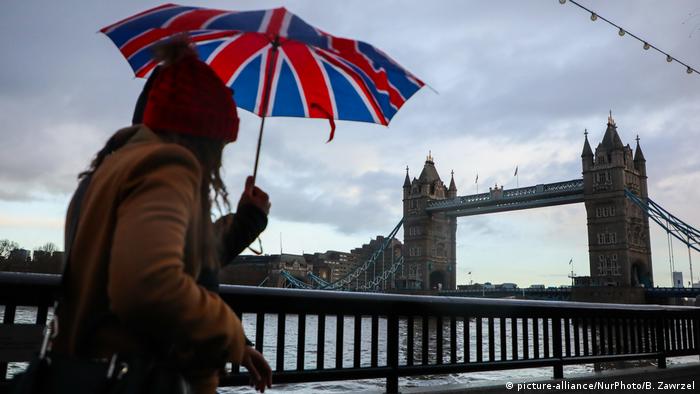 Britain exits the European Union at 11 p.m. local time on Friday (00:00 Brussels time) after almost 50 years of membership and three-and-a-half years of political and economic uncertainty. For all the flag waving and commemorative coins, Brexit day is mainly a symbolic event. Although the UK will no longer be represented in EU institutions, almost everything else about its relationship with the bloc will remain the same.

"No one will notice any distinct difference," Jonathan Portes, professor of economics and public policy at Kings College London, told DW, as the UK stays in the EU's Single Market and Customs Union until December and citizens' travel, work and social security rights remain intact.

Britain's economy, however, has already suffered significant economic damage since the June 2016 vote to end its EU membership. Estimates published earlier this month by Bloomberg showed the country is already 130 billion pounds (€154 billion, $170 billion) poorer. That figure is likely to reach 200 billion pounds by the end of 2020.

Despite no disorderly EU exit, for now, the UK economy has still lagged other G7 nations. Brexit uncertainty prompted firms to delay investments, the falling pound spiked inflation putting a dampener on consumer spending, and the UK stock market has underperformed its US and Chinese peers. While some British businesses hope to benefit from a major hike in government spending, many economists think the post-Brexit bounce will be short-lived.

Britain now enters an 11-month transition period so that the EU and UK can thrash out their future trading relationship. London says it wants a Canada-style free trade deal, while Brussels says only a bare-bones deal will be possible within the time frame. After all, full negotiations are only due to begin in March. Some EU diplomats insist the transition period will need to be extended for a further two years, despite UK Prime Minister Boris Johnson's rejection.

"In some ways, the time pressure is secondary to the politics," Portes added. "The really important question is, is there scope for a deal at all?" especially as the EU insists on a level playing field in relation to state aid and competition policy while Britain insists it will no longer align with EU rules. "Even if you had unlimited time, if the two sides hold on to their current positions, the choice is really between a pretty limited deal and no deal at all."

Down to the wire

That prospect has sparked concerns of yet another cliff-edge scenario at the end of 2020, which would see Britain begin to trade with its largest economic partner according to World Trade Organization rules. "That would increase the cost of trade, and reduce the volume of trade between the EU and the UK," warned Professor Alexander Sandkamp of Germany's Kiel Institute for the World Economy (IfW Kiel).

One of the priorities during this year's negotiations will be whether Brussels will recognize London's financial services regulations as equivalent to EU rules. Equivalence is essential for the City of London, the world's second-largest financial center, to retain access to the huge EU market. TheCityUK, an industry-led body that represents British-based financial and related professional services, believes the EU's equivalence process is "not fit for purpose" as it is too opaque and political.

Gary Campkin, managing director, external relations & strategic issues at TheCityUK, told DW that British negotiators will seek to introduce "outcomes-based equivalence" rules, which mean even if regulations or appraisals differ between London and the EU, "as long as you arrive at the same end result, you will have done what you set out to achieve."

Scotland and Brexit: What next?

Dozens of London-based international banks have already relocated some of their operations to Frankfurt, Paris, Luxembourg and Dublin to retain "passporting" rights to operate in the EU. Fortunately, fears of an exodus of tens of thousands of jobs from the UK capital have yet to materialize, although some 7,000 positions have moved, according to Ernst and Young.

"There's not been this great sucking sound away from the UK that some were predicting," Campkin said. "That's because the ecosystem of financial-related professional services in London, which forms the basis of the international financial center, is just not something people want to move away from. And it is not possible to replicate easily elsewhere either."

Even so, the UK economy is heavily reliant on financial services, which makes up 11% of GDP, is the largest taxpayer, and the largest service product exported by the country. In negotiations with the EU, the financial sector is clearly Britain's Achilles heel, and Brussels could threaten access to the EU market as leverage for other demands such as fishing access to UK waters.

Read more: Why Brexit is a turning point for Europe-Africa relations

"The question is, will EU regulators turn the screws a bit more?" Portes told DW. "Brussels could insist that banks show more evidence that they have moved operations to within the EU jurisdiction, or they could just decide that it's OK to let London keep its current role, but now being offshore from the EU."

While negotiating with Brussels, Britain will, for the first time since the referendum, be allowed to open trade negotiations with countries outside the bloc. This is crucial for the post-Brexit UK economy, especially as UK exports to EU states have been falling since 2006, while exports outside the bloc have grown.

The top priority will be a comprehensive trade deal with the United States. "It's possible that they will reach a deal fairly quickly, since [US President] Donald Trump wouldn't mind closing a successful trade deal while he's campaigning for a second term," said IfW Kiel's Sandkamp.

Most analysts agree that pragmatism and not populist politics will be vital if British negotiators are to achieve a meaningful deal with both Brussels and Washington in such a short time frame. And if Johnson can convince the electorate that any further Brexit delay will be just an "implementation phase," then perhaps the country can begin to have its cake and eat it.

The heads of the EU Commission, the EU Council, and the UK government have signed off on the Brexit deal negotiated with the UK. Here's what else needs to happen before Britain leaves the bloc at the end of the month. (24.01.2020)