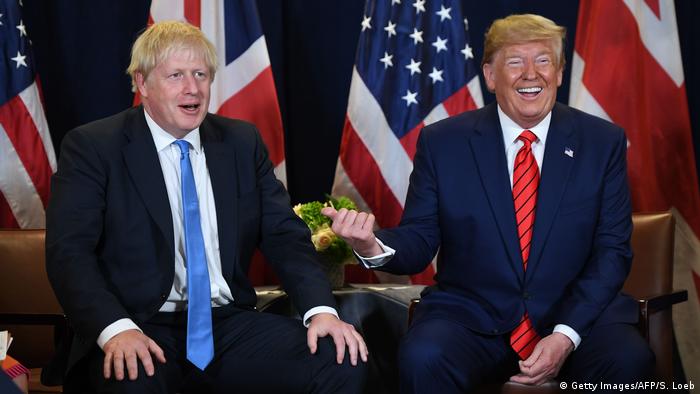 British Prime Minister Boris Johnson spoke on the phone with US President Donald Trump on Monday, where they discussed increasing trade between the US and the UK.

The call comes days after Johnson emerged victorious in the British parliamentary elections, obtaining a sweeping victory in the House of Commons.

Both leaders said they looked forward to the negotiation of an "ambitious free trade agreement.”

"The prime minister spoke with President Trump, who congratulated him on the result of the general election," a Downing Street spokesman said in a statement.

"They discussed the huge importance of the relationship between the UK and US, and looked forward to continued close cooperation on issues such as security and trade, including the negotiation of an ambitious free trade agreement."

The UK prime minister won 365 seats in the 650-seat parliament, giving him a majority of 80 seats. The new parliament will convene on Thursday, the same day that Queen Elizabeth II will outline the government's program in the so-called Queen's Speech.

Legislators have signaled they will move ahead with a Brexit vote this Friday, when they vote to approve the Brexit withdrawal agreement bill negotiated by Johnson, a government spokeswoman said on Monday.

The UK has a deadline of January 31 to leave the EU and Johnson is hoping that the new parliamentary majority can help deliver that.

If the deal is approved and Brexit happens, a transition period will follow until the end of 2020, while the UK and EU iron out details of their future relations. During this period, EU rules and regulations would still apply in the UK, with people and goods still able to pass freely between the UK and the 27 remaining EU members.

Several hundred people protesting against the UK election result have marched through central London. The crowd scuffled with police and chanted for UK Prime Minister Boris Johnson to quit. (13.12.2019)

We're quick to bandy about words like momentous, stunning and historic. But this is such a moment. The outcome of the election will define UK politics for years to come. Is it headed for meltdown, asks Rob Mudge. (13.12.2019)

The UK general election is being billed as the most important to take place in decades. With Boris Johnson's Conservatives seeking a majority, and rivals desperate to alter course on Brexit, what are the key issues? (12.12.2019)