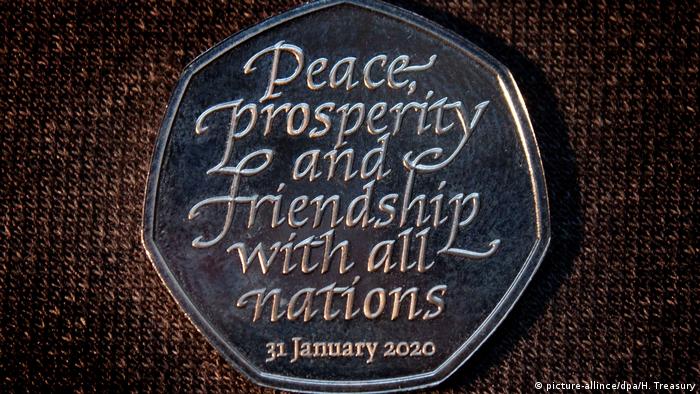 The British government on Sunday unveiled a new 50 pence coin to mark the country's departure from the European Union on January 31. The coin bears the inscription "peace, prosperity and friendship with all nations."

"Leaving the European Union is a turning point in our history and this coin marks the beginning of this new chapter," said Finance Minister Sajid Javid.

The finance ministry has twice pushed back the minting of the commemorative Brexit coins as the UK asked to delay its day of departure in the absence of a deal or parliamentary consensus on how to conduct the withdrawal.

About 3 million of the coins will enter circulation across Britain starting on Friday, with a further 7 million to be added later in the year.

A transition period where Britain and the EU will negotiate the final terms of the divorce agreement is set to last until the end of 2020.

Many people expressed their outrage on social media about the government celebrating such a divisive event with a commemorative coin:

British MPs approved the latest Brexit bill, but rejected five amendments. They included provisions to reunite child refugees with families already in the UK, and guaranteed residence for millions of EU citizens. (22.01.2020)

Portuguese diplomat Joao Vale de Almeida is set to serve as the EU's top envoy in London after the UK leaves the bloc, EU authorities have said. The diplomat has represented the EU in Washington and at the UN. (24.01.2020)