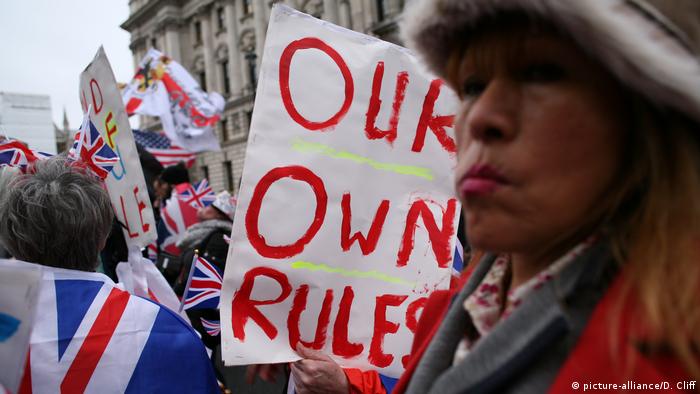 Prime Minister Boris Johnson will outline tough terms for post-Brexit trade talks with the European Union on Monday, with the UK leader expected to say "Britain will prosper" regardless of the outcome.

"There is no need for a free trade agreement to involve accepting EU rules on competition policy, subsidies, social protection, the environment, or anything similar," Johnson will say in his speech, according to excerpts released by his office on Sunday, just days after the UK left the now 27-member bloc.

He is also expected to say that if the European Union does not accept an agreement similar to the EU's arrangement with Canada, then trade with the EU will have to be based on the UK's existing withdrawal agreement with the bloc, which would be "more like Australia's."

'No doubt that Britain will prosper'

Johnson will say he expects it would be a "highly unlikely event" that the UK will not succeed in striking an arrangement like Canada, but that "in either case, I have no doubt that Britain will prosper."

After officially leaving the EU on January 31, the UK now has 11 months to strike a trade deal with the EU bloc or face resorting to WTO trading rules. UK trade talks will begin with the EU in March.

The EU has repeatedly warned Britain that the level of access to its single market of 450 million people will depend on how far London agrees to adhere to such rules.

What are Canada's and Australia's EU trade arrangements?

Canada's trade arrangement with the EU, CETA (Comprehensive Economic and Trade Agreement), saw tariffs removed on around 98% of goods traded between the EU and Canada, making it much cheaper to sell each other's goods in the other jurisdiction. It also sees "cooperation" on standards, limiting the need for safety and quality checks.

Currently, Australia-EU trade runs along basic World Trade Organization rules, although there are specific agreements for certain goods. Australia is currently negotiating a trade deal with the European bloc.

Most of Scotland voted to remain in the EU — but they have left anyway. A young Scot working on the continent, DW's Elliot Douglas, writes that the future holds nothing but uncertainty and disillusionment. (02.02.2020)

A trade agreement between Canada and the EU should be signed next week, according to European Parliament President Martin Schulz. However, the Belgian region of Wallonia remains a stumbling block. (22.10.2016)