Boris Johnson is using the prospect of a Brexit cliff edge to pressure the EU into negotiating a trade deal in 11 months. EU officials have said that the time frame is unrealistic. 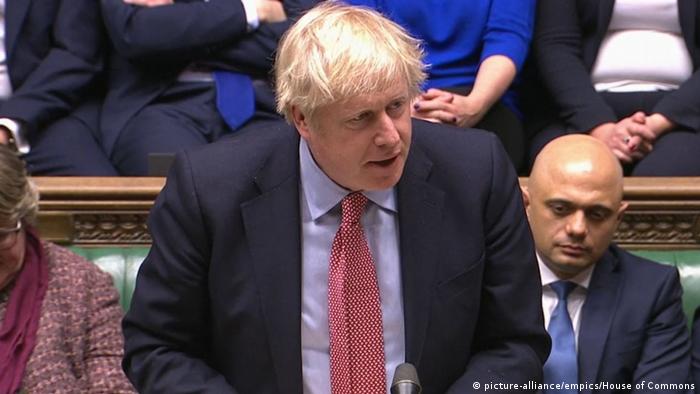 British Prime Minister Boris Johnson said Tuesday that the country's ruling Conservatives plan to outlaw any extension of an 11-month time frame to hammer out a trade deal with the EU following Britain's expected departure from the bloc on January 31.

Downing Street is now expected to insert a clause into the Withdrawal Agreement Bill that rules out extending Britain's trade negotiations with the EU beyond the end of 2020.

"This Parliament is not going to waste the time of the nation in deadlock and division and delay," Johnson told lawmakers as they assembled for the first sitting of Parliament since Johnson's Conservatives won a strong majority last week.

Read more:Brexit deal: What could it mean for the Northern Irish and British economies?

After Britain leaves the EU, both sides will try to strike an agreement on their post-Brexit relationship. Talks are set to begin in February.

A comprehensive free trade deal would include agreements on things such as financial services and tariffs on goods.

However, if Britain and the EU cannot close a deal, the country could leave the EU without an agreement on trade terms, which has injected uncertainty into markets and alarmed British business.

"I would expect that these negotiations will be even tougher than the negotiations on the Brexit treaty," said Brzeski. "I think the end of 2020 is completely unrealistic."

Following a surge in the British pound after the election, it took a hit following Johnson's announcement Tuesday, falling 1.6% against the Euro to 84.99 pence and 1.5% against the dollar at $1.32.

However, the EU's top economic official, Commission Vice President Valdis Dombrovskis, was skeptical that all elements could be negotiated in time.

"We haven't even started those negotiations, but this provides for a very rigid time frame ... certain things will be out of reach," Dombrovskis said. "We will need now to see what exactly can be achieved during that time period."

US President Donald Trump has congratulated Johnson on his victory in the UK's parliamentary elections. The UK prime minister will move ahead with plans to finalize his country's divorce from the EU. (16.12.2019)

Britain: trembling ahead of Brexit