The Russian leader says his country is ready for more cooperation with Europe. He also says it's a "myth" that Russia isn't concerned about the environment, promising to cut emissions faster than the EU. 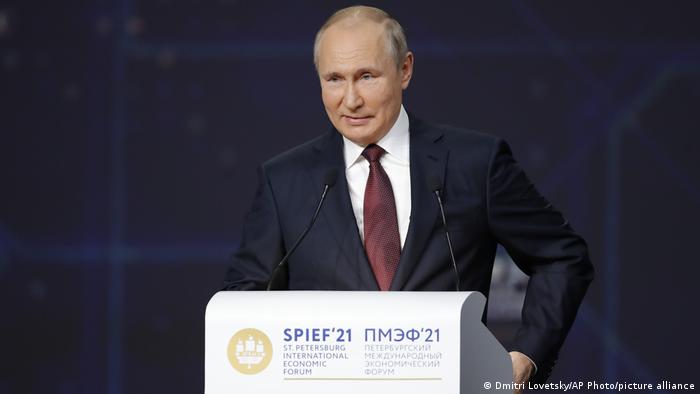 Addressing a world business forum in St. Petersburg, Russian President Vladimir Putin on Friday announced the completion of work on the first line of the controversial Nord Stream 2 gas pipeline across the Baltic Sea between Russia and Germany.

"Today ... the pipe-laying work of the first Nord Stream 2 line was successfully finished. Work on the second line is ongoing," Putin said, noting that Russia was now ready to begin filling the line with gas.

The Russian president underscored his country's willingness to participate in more such collaborations with EU nations in the future.

Putin also said that the idea that Russia is not concerned with the environment is a "myth," promising to cut emissions at a pace faster than Europe, "In the next 30 years, the accumulated volume of net greenhouse gas emissions should be lower than in Europe." The Russian leader said that he had ordered his government to present plans for doing so by this fall.

Why is Nord Stream 2 so controversial?

The Nord Stream 2 pipeline has divided opinions since plans for construction were announced. Critics fear Russia will use the infrastructure project to expand its influence in Europe. Moreover, Ukraine and Poland oppose the project as it effectively cuts them out of the transit business and Washington opposes it because it wants to sell US gas to the EU.

The pipeline is owned by Nord Stream AG, whose majority shareholder is Russian state-run energy firm Gazprom. The pipeline, extending from Russia to northern Germany, will facilitate the transportation of Russian natural gas to Western Europe.

German Chancellor Angela Merkel has been a supporter of the pipeline, saying it will help her country meet its energy needs. She has consistently defended the project in the face of criticism, despite contentious relations with Russia.

Last week, the Biden administration announced that it would no longer level sanctions against companies involved in the project, calling them "counterproductive" to the aim of achieving better relations with Europe.

Putin on gas, the dollar, the US and Ukraine

The $12 billion (€9.9 billion) Nord Stream 2 Baltic Sea pipeline is the longest sub-sea gas pipeline in the world and looks likely to double Russian gas exports to Germany, the EU's largest economy. The second line of the project is scheduled to be completed within two months, at which point Putin said Gazprom would begin shipping gas as soon as Berlin gave it permission to do so.

Putin, who will meet US President Joe Biden on June 16 at an upcoming summit in Geneva, Switzerland, called fracked US gas "barbaric" and more expensive than what Russia is offering.

He also floated the idea of Russian companies abandoning the dollar  — which he said was being used for "economic and political war" — noting that such a move would, "be a serious blow to the currency, but we don't want to do that."

"The euro is completely acceptable for us in terms of gas payments. This can be done, of course, and probably should be done," Putin said, suggesting a path to avoiding US sanctions.

Putin, who has kept the West on its toes over incursions into eastern Ukraine and an illegal annexation of the Crimean peninsula — not to mention several incidents involving the suspected poisoning and the blatant arrest and abuse of political opponents — said he was willing to work with Ukraine.

After criticizing Kyiv for the high transit fees it charges for EU-bound Russian gas, Putin said his country would welcome normalized relations wth Ukraine but said Kyiv must first demonstrate good will toward Moscow before that could happen.