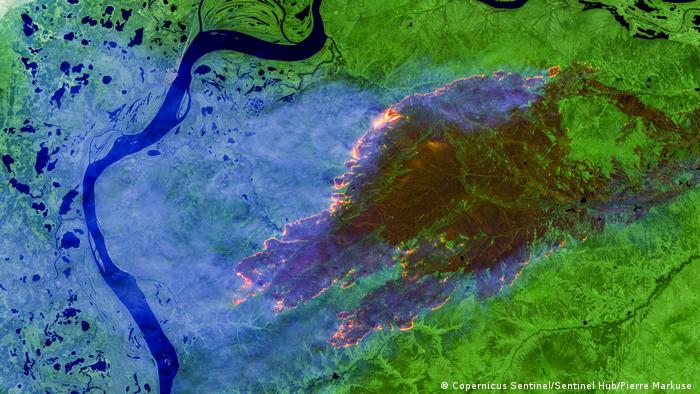 A dry grass fire in Siberia, about 75 kilometers wide, is seen in this photo from the EU's Copernicus Sentinel satellite

In late May, a massive fuel spill flooded waterways and a freshwater lake near the Arctic city of Norilsk in Siberia. The spill came as the region was suffering from a record number of wildfires, with an outbreak incinerating wide swaths of the tundra.

At first glance, these recent environmental disasters in Siberia don't appear to be linked, but considering their frequency and intensity, scientists say it's clear that what do they have in common is climate change.

Siberia is known for its long, harsh winters, with average temperatures that can drop as low as –49 Celsius (-56 Fahrenheit) in the far northeast. And even though the average temperature in July is far from freezing at 19 C (66 F), most of the ground stays frozen throughout the summer as what's known as permafrost. 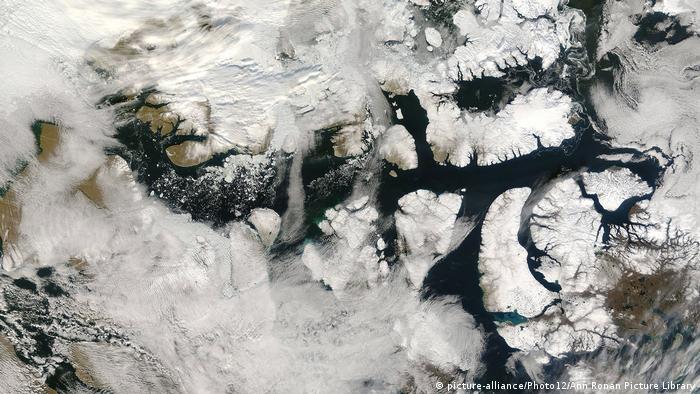 In 2007, the Northwest Passage in Arctic Canada was ice free for the first time since satellite records began 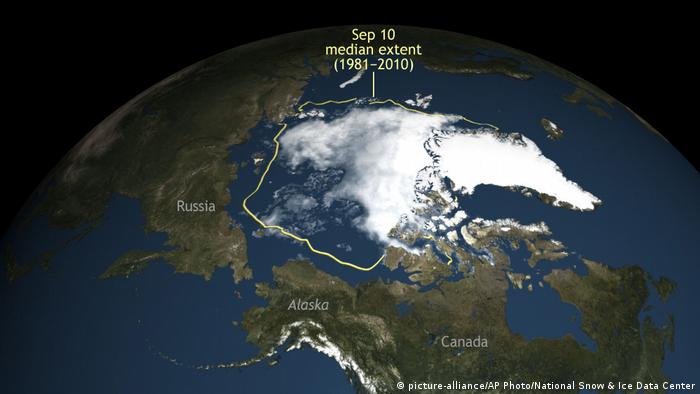 In fact, Siberia's summer temperatures can even peak in the 30s — so then just how much of a problem are the heat waves of recent years? The short answer: a big one.

"We've had decades of warming in this region… [and] it's warming faster than anywhere else on the planet," said Thomas Smith, assistant professor in environmental geography at the London School of Economics.

The first half of this year was unseasonably warm, with temperatures in July nearly 10 degrees above average. In June, the mercury in the town of Verkhoyansk, located north of the Arctic Circle, hit 38 C — which is believed to be a record.

Even worse, the winters are also getting warmer. This year's was the warmest in 130 years of observations, according to the Russian Hydrometeorological Research Center.

The warming trend in the Arctic is believed to be twice as fast as the global average, due in part to something called polar amplification.

The bright, white ice caps usually reflect around 80% of the sun's radiation back out into space. But hotter temperatures have caused the ice caps to recede and leave behind darker open water, which absorbs more of the sun's rays. This speeds up the melting process and keeps new ice from forming, making the warming even worse.

At the same time, warmer subtropical winds are being pushed north more often due to a shifting jet stream — another effect of climate change. All this has contributed to a drier climate and more destructive wildfires seasons, particularly in the last two years. 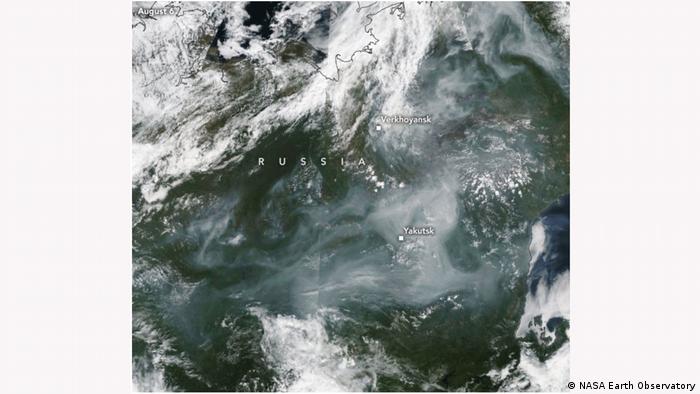 Wildfires, sparked by lightning or spontaneous combustion, are a part of the natural cycle in Siberia's relatively fireproof ecosystem saturated with lakes, rivers and swamps. But, they're more frequent and more intense.

"The fire season is longer. Now it comes early and ends later," said Anton Beneslavskiy of Greenpeace Russia. The degraded landscape left after a wildfire prevents the growth of healthy, mature trees which are more resistant to blazes. Instead, they're replaced by more flammable shrubs and grassland.

According to Smith, the fires north of the Arctic Circle in June 2019 and June 2020 combined were more intense than "the previous 16 Junes put together." His recent observations have estimated that between 2 and 4 million hectares of land are currently ablaze in the Arctic, releasing more than 16 megatons of CO2 into the atmosphere in June alone. 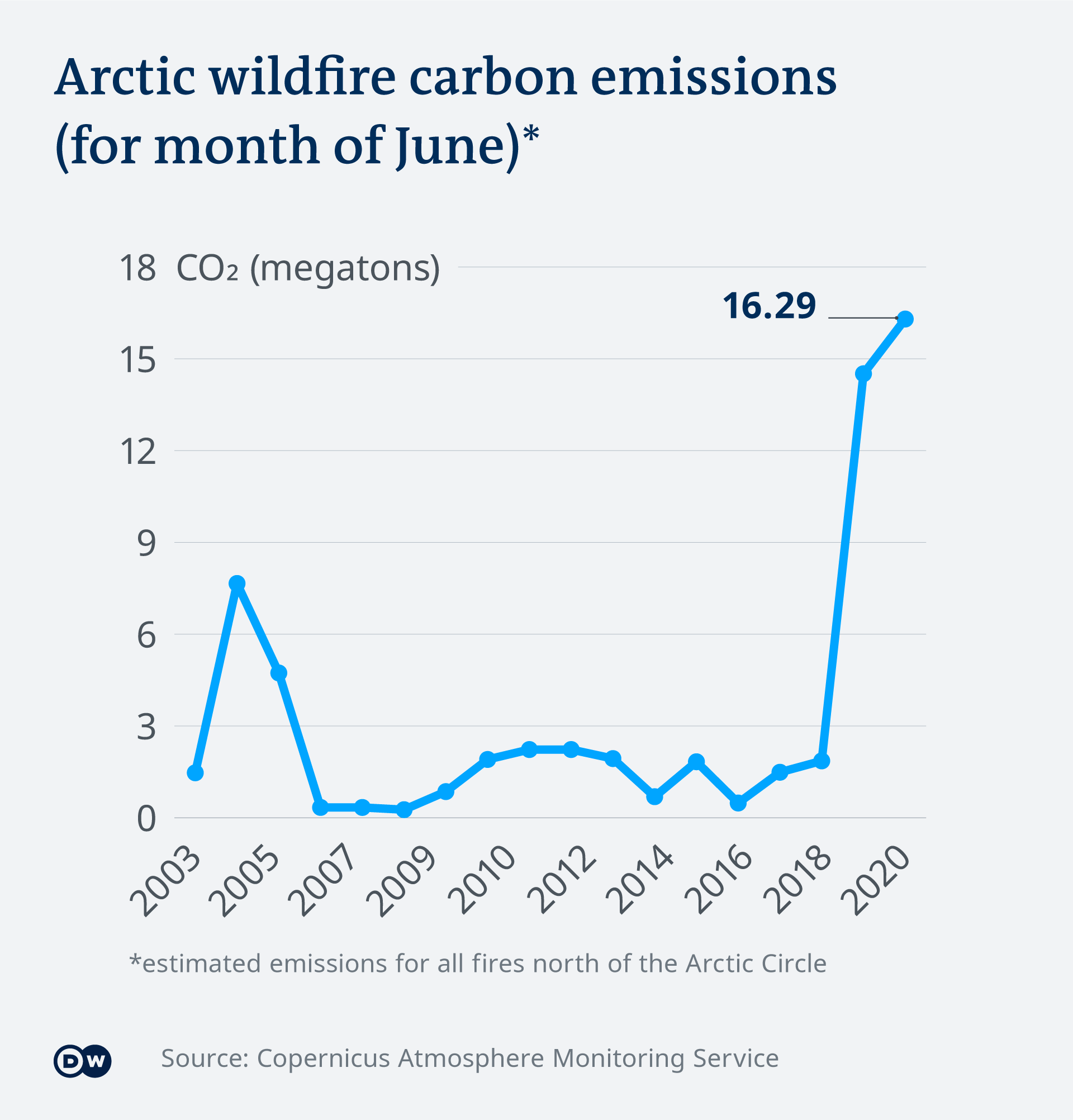 The European Centre for Medium-Range Weather Forecasts (ECMWF) estimates that roughly 100 megatons of CO2 were released by June fires in Sakha Republic and neighboring Chukotka, across the Bering Strait from Alaska. That's roughly equivalent to the annual fossil fuel emissions released by Belgium in 2017.

Smith believes that roughly half of the fires sweeping Siberia are on peatland, naturally wet carbon-rich soil several meters deep made up of partly decayed plant matter that accumulates over thousands of years.

With climate change, this peat layer is more likely to dry out and become a tinderbox just waiting to ignite. And burning peat releases 10 to 100 times more carbon than a burning tree, according to Guillermo Rein, a professor of fire science at Imperial College London. 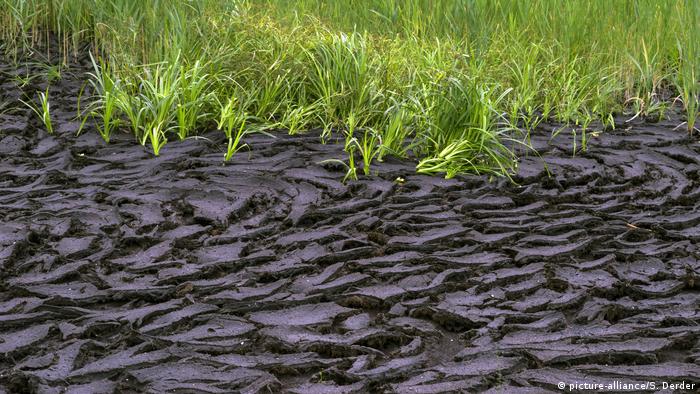 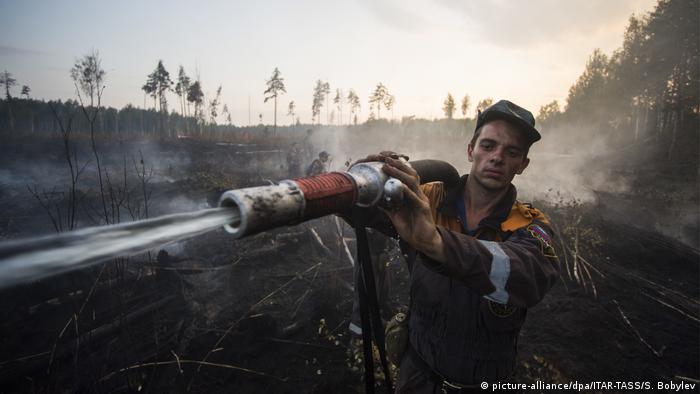 Peat fires are especially difficult to put out

"Every single time peat burns, it is a net carbon contribution to climate change. And you cannot undo it," he said. Plus, peatland blazes are extremely difficult to extinguish.

"I've been at a peat fire and it's rained for an hour very heavily, and it's still burning at the end," said Smith. "They will just smolder away. And some peat fires are known to last for months." They have even been known to survive underground through the winter months as "zombie fires," flaring up again on the surface in the spring.

Rein called it a "positive feedback loop" with a negative impact: The more peat and trees that burn, the greater the greenhouse gases that are released into the atmosphere. That leads in turn to hotter temperatures and drier, less resilient forests and peatlands — and more wildfires.

Read more: Russia unveils plan to 'use the advantages' of climate change

Much of the burning peat in Siberia sits on permafrost, only adding to scientists' concerns. Climate change, helped along by increased wildfire activity, is melting this frozen ground and creating a host of new problems.

Up north, many buildings are fixed to stilts anchored to the permafrost for stability.

Nearly 60% of all buildings in Norilsk — a city of 177,000 — have been damaged by this vanishing permafrost, which causes the buildings to shift and crack as the ground subsides. At least 100 have been rendered uninhabitable.

Infrastructure such as roads, airports and oil pipelines are also at risk. Subsidence might also have been a factor in the massive spill from a collapsed diesel fuel tank at a power plant near Norilsk in May. Emergency teams are still scrambling to prevent the 21,000 tons of fuel from reaching the Arctic Ocean.

Read more: Life after coronavirus - 'We can shape a totally different world' 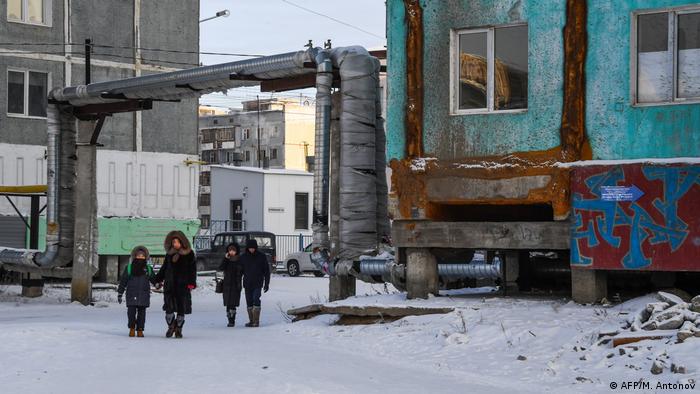 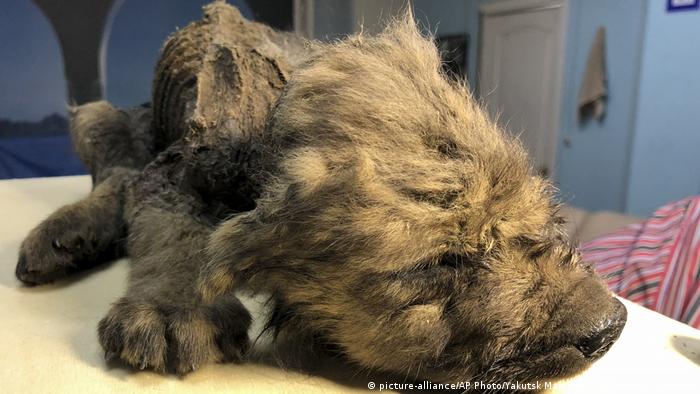 The melting permafrost has also uncovered long-hidden surprises, such as this 18,000-year-old preserved puppy

The melting permafrost and decaying peat also release methane gas, another greenhouse gas that's about 28 times stronger than carbon dioxide. When the ground thaws, microbes that have survived for thousands of years in the permafrost turn all that stored organic carbon into carbon dioxide and methane, which enters the atmosphere and further exacerbates climate change.

It creates a toxic smog when combined with wildfire smoke and, with the right wind conditions, can intensify air pollution in major population centers in Eastern Asia, Eastern Europe and the west coast of North America.

He said those compounds, along with secondary pollutants like ozone that are created when nitrogen oxides in smoke reacts with methane and sunlight, add to particulate matter already in polluted air. Increased particulates aggravate a broad range of health issues such as asthma, respiratory diseases and cancer.

A 2018 report from Greenpeace raised the alarm about the increasing danger of wildfires around the world. "If we keep ignoring the climate impacts of fires, we will struggle to get on a viable pathway that limits warming to the Paris agreement target of 1.5 C," said the report.

Along with the Amazon, the Congo Basin and other major forests, Siberia's ecosystem is just as "crucial" for our climate, said Beneslavskiy of Greenpeace Russia.

"The protection of these forest ecosystems is a global issue, a global goal," he said.

The scorching heat in Siberia this summer was a result of burning fuel, wildfires, thawing permafrost and other man-made conditions, a new study says. Scientists warn it is evidence of increasing extreme temperatures. (16.07.2020)

The next five years could see the world passing a key temperature marker for global heating, the UN says. And the side effects of the coronavirus pandemic are not likely to prevent it. (09.07.2020)