Glacier scientists are investigating the appearance of pink ice at Italy's Presena Glacier, an Alpine region known for skiing and outdoor sports. Research suggests the algae could contribute to increased glacial melt.

Striking photos and videos have been making the rounds on social media in recent days, with people marveling over the appearance of pink ice in the Italian Alps.

The colored ice — known as "watermelon snow" — has been spotted at the Presena Glacier, a popular winter sports area in Italy's northern Trentino region, which is already feeling the effects of climate change. The area has seen at least 15% of its glaciers retreat since the beginning of the century, and researchers are now looking into whether the proliferation of this natural phenomenon, caused by algae, could speed up the melting process even further. 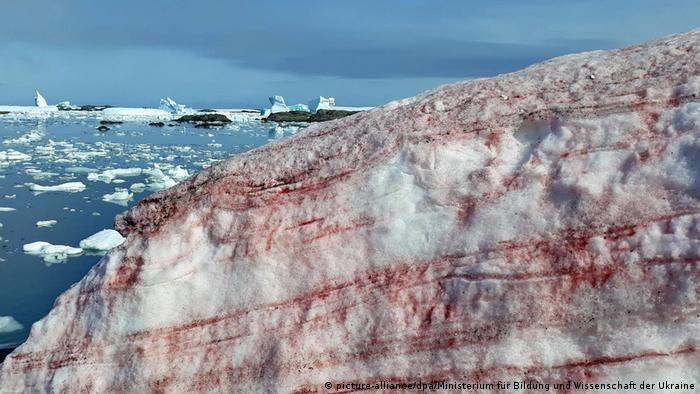 The pink ice is caused by a naturally occurring algae, common to snowy regions around the world

Algae found in the Alps remain dormant during the winter, and only begin to spread on the ice in the spring and summer months when conditions are ideal: increased light and nutrients, plenty of meltwater and a temperature slightly above freezing.

It turns shades of pink and red when exposed to sunlight, which causes it to produce a naturally protective red carotene layer to shield it from harmful ultraviolet radiation. 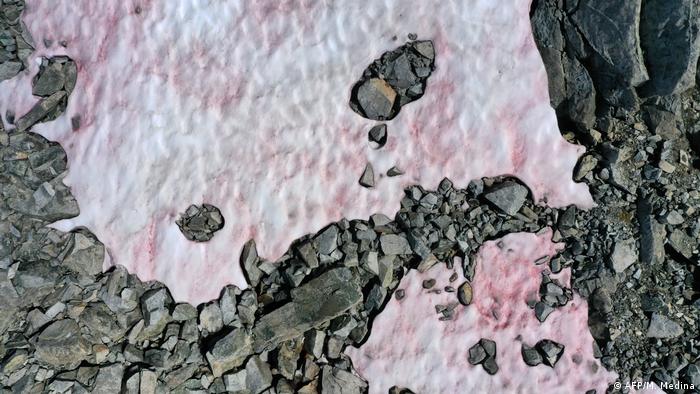 Di Mauro says the ice, darkened by the algae, absorbs the sun's rays and melts faster, eating away at the glacier 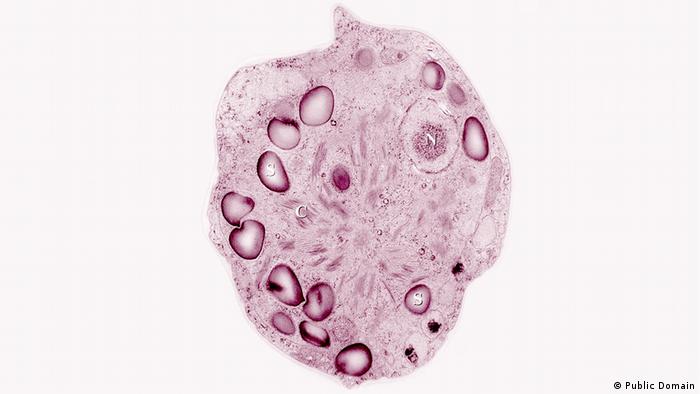 Chlamydomonas nivalis, which exhibits its red coloring in the close-up, uses pollutants carried in snow as food

But it doesn't just give snow the look of strawberry gelato. Algal bloom can also tint ice shades of brown, violet yellow or green, as seen in a recent survey that analyzed the slushy coastal regions of Antarctica where warmer temperatures and the excrement of marine animals and birds cause it to spread.

Initial reports suggested the algae might be Ancylonema nordenskioeldii, a species common on the ice sheet in southwest Greenland. In a paper published earlier this year, Di Mauro wrote about his discovery of the first signs of this algae at the Morteratsch Glacier in Switzerland.

"Warm summers and dry winters create the perfect environment for the algae to grow. So, in the future the presence of algae on snow and ice could be favored by climate change," Di Mauro told DW, though he said that remained to be proven.

Di Mauro said it was still unclear how the algae had made its way to the Alps from Greenland, or whether it had already spread elsewhere. But, he added, "I would not be surprised to find it on other glaciers in the Alps." No matter the color, the algae don't help the already endangered glaciers. The bright, white surface of a typical glacier generally has a high albedo, meaning it reflects around 80% of the sun's radiation back into the atmosphere. But as the algae spread over the surface of the glacier, it darkens the ice and causes it to absorb more solar radiation, heating the glacier and speeding up the melting process.

This isn't a new problem for glaciers, though. Matthias Huss, a glaciology professor at ETH Zurich, told DW in an email that organic material, dust and combustion residue — soot and ash — can accumulate on glaciers over time and "significantly" reduce their ability to reflect the sun's rays.

Huss doesn't think the pink algae will affect "glacier retreat significantly." He said that while the pink algae are "very spectacular," they only last for a relatively short time and aren't very widespread in the Alps. He believes it's possible that algae may contribute to a slight additional reduction in ice volume by the end of the century, but said more research was necessary. 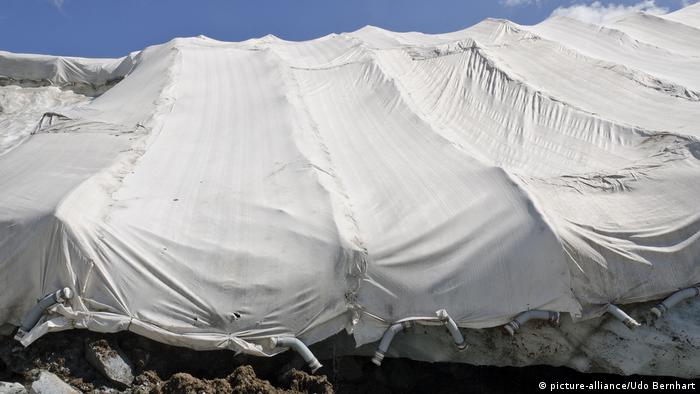 Some ski resorts have begun covering their slopes with insulating tarps in the summer, preserving up to 70% of the snow 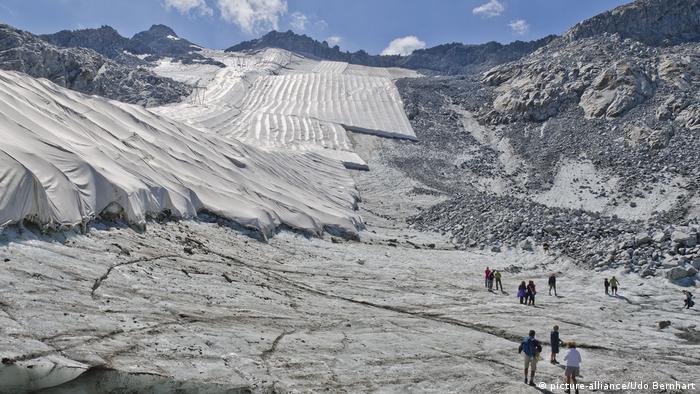 On a large scale, however, this would be too expensive and could cause more environmental damage

The main cause of glacial melt, however, continues to be climate change. In a 2019 study published by the European Geosciences Union (EGU), Huss said that if nothing is done to curb global CO2 emissions "the Alps will be mostly ice free by 2100, with only isolated ice patches remaining at high elevation, representing 5% or less of the present-day ice volume."

The study, co-authored by Huss, Harry Zekollari of the Delft University of Technology and Daniel Farinotti of ETH Zurich, used computer models to examine ice flow and melt processes. It showed that glaciers in the Alps were already on track to lose about 50% of their total volume by mid-century, no matter what happens with emissions. Algae growth did not factor into their projections.

Ice fields are an integral part of the Alpine ecosystem and economy, as they attract tourists and "act as natural fresh water reservoirs" for agriculture and hydroelectricity, said the EGU study.

"The Alps are Europe's water tower," said Huss. "If the glaciers begin to provide less water during the summer, this could become problematic in periods of drought." However, he said, given that the glaciers aren't expected to disappear completely before the end of the century, in the worst-case scenario they will likely provide enough water for decades to come.

According to Zekollari, it might be possible to save "approximately one-third of the present-day [glacial] volume by the end of the century," if the world follows CO2 curbs on par with the 2015 Paris climate agreement.

But he said the signs weren't very positive at the moment, with the US abandoning the Paris accord and the EU still stuck in discussions of how it will reach its "ambitious goals."

"It is clear that our actions today and decisions we make in the near future will have a large effect on the evolution of glaciers in the second part of the 21st century," said Zekollari.

Officials in Italy say they have now found the bodies of all 11 people who went missing when a piece of the Marmolada glacier detached and launched an avalanche in the Dolomites.