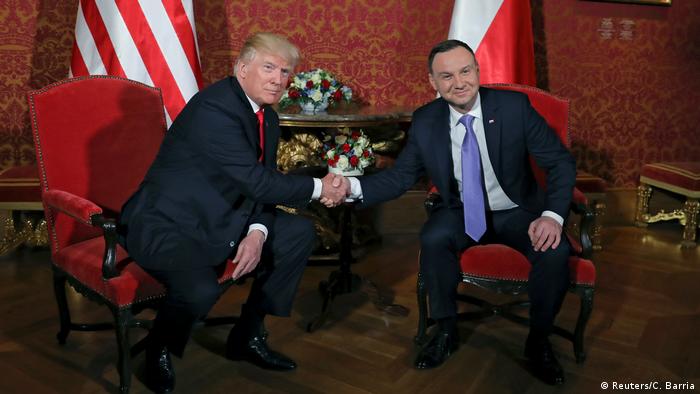 When US President Donald Trump says something, it's often shocking and vulgar. It's also true, according to conservative US commentator Tucker Carlson. He experienced this personally when he made a derogatory remark about Trump's hair. Trump retorted that Carlson's hair was indeed better, but that he, Trump, "got more pussy." How on earth, thought Carlson, can anyone say such a thing? But he also had to admit that Trump was right.

We Eastern Europeans don't think twice about saying such things, and our politicians can also be pretty uncouth. Take Czech President Milos Zeman, for example. The man who swore "death to teetotalers and vegetarians" also said the way to deal with environmentalists was to "burn them, piss on them and salt them." Or take Poland's strongman Jaroslaw Kaczynski, who described migrants as carriers of dangerous "parasites and protozoa.”

Perhaps this is one reason why Trump is more popular here than in Germany. We like provocation. We like plainspoken men who have the balls to say what they're thinking. If they're vulgar, so much the better. But Trump's manner isn't the only reason why he's so detested in Germany and elsewhere in "old Europe," yet well-liked by many in "new Europe." People in the East like him because they like America.

In the "old EU," they like America less on principle — although many oddly see themselves, especially in Germany, as part of the "West." In the East, we know that the West is America and Britain. They are the only countries prepared to fight, if necessary, for freedom. The rest constitute the bureaucracy-obsessed, regulation-mad, fundamentally cowardly continental Europe, whose intellectual elites would, if they could, have prevented former US President Ronald Reagan from winning the Cold War.

When we see these kinds of numbers, some of us in Eastern Europe wonder what exactly is going on in Germans' heads. Our image of America and our opinion of Trump are two separate things. This doesn't seem to be the case for Germans or for western Europe in general. Trust in Trump might be higher in Eastern Europe (around 35 percent) than in the West (around 10 percent), but our faith in him is also relatively limited, however much we may appreciate his lack of formality. According to the Pew study, people in Eastern Europe also thought Trump's predecessor, Barack Obama, was more trustworthy. But while trust in the US president also plummeted here after Trump's election, it didn't affect our positive image of the US. Not so in western Europe. There, people denounced the US under President George W. Bush, thought it was great under Obama, and denounce it again now under Trump.

The only conclusion we can really draw from this is that we in the East examine things more closely and think more realistically than our counterparts in the West.

Trump's got genuine character. We like character. His attitude to migration? We see things the same way. His "America First" politics? It's the same with us. Orban says "Hungary first" and in Poland it's "Poland first." But because America is neither Hungary nor Poland, we can't trust Trump — he's not looking out for our welfare, but that of Americans. We, for our part, are not looking out for his welfare, but our own. That's both normal and honest.

The question we ask in Eastern Europe (less, apparently, in western Europe) is: Where do our interests coincide, and where don't they? Trump's trade war against the EU? It damages us, because we're in the EU. Trump's political attacks against the EU? That can help us, if western Europeans want to compel us to do things we don't want to. So we need to defend ourselves when Trump and the US act to our disadvantage, court them when they can bring us something positive and, ultimately, seek pragmatic compromises when it is in our interest to do so.

More fundamentally, though, Trump represents the idea that the United States is, and should remain, the most powerful country in the world. "Make America great again!" This policy is the most powerful guarantee of our security that we can imagine. An America that no longer wants to dominate is an America that can no longer protect us. When push comes to shove, the Germans certainly won't protect us against Russia, for example, and neither will the French. Of course, we're more than happy to trade with the Russians for now. Provided, that is, that they don't threaten us.

Opinion: Vladimir Putin's sham referendums in Ukraine are a sign of weakness 14h ago