Jean-Claude Juncker: EU must close ′gap between East and West′ | Europe| News and current affairs from around the continent | DW | 12.09.2018

Jean-Claude Juncker: EU must close 'gap between East and West'

In his final State of the EU speech, European Commission President Jean-Claude Juncker urged the bloc to take on a stronger role in the World. DW's Max Hofmann asked him how realistic that goal is in a divided Europe. 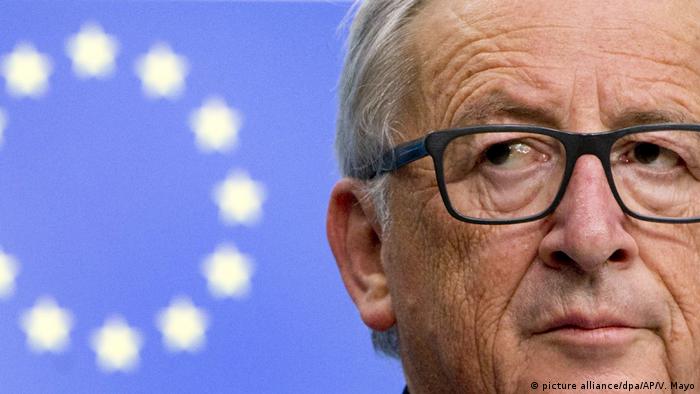 DW: Mr. Juncker, in your speech on Wednesday you talked about how powerful and influential Europe can be when it speaks with one voice. But at the same time we have this rift, for example, between Hungary, Poland and other states, that's growing deeper and deeper. How are you planning on resolving this contradiction?

Jean-Claude Juncker: By talking to people. Everyone agrees with me in saying almost with pathos: We've got to move closer together. Sometimes, the differences can be monumental. We can't allow this. But I'm very much against widening this gap between East and West further. There are also many issues that we agree on.

But take Hungarian Prime Minister Viktor Orban's speech on Tuesday. He wasn't cooperative, he wouldn't compromise. How are you going to rein him in again?

I've actually given up on that. There are big differences between Viktor Orban and me, even though we're both part of the same European family of political parties. I keep telling Viktor Orban that this radical rhetoric he's firing at Europe benefits neither him, nor Europe.

Juncker: 'European sovereignty will never be directed against others'

What's your strategy? Are you just going to sit it out or what would you suggest? Will you wait for someone new to be elected, or is it perhaps time to look at building a two-speed Europe? What's the solution?

I don't think we should be talking about a two-speed Europe yet. We're not a debating club, but a club that debates. Incidentally, the president of the [European] Commission has much less influence on these kinds of things than many people would think. Governments take decisions on the basis of recommendations presented by the Commission. If, for example, all member states had agreed to the Commission's 2015 proposal on the refugee issue, that would have saved us a lot of energy and many people would have been spared a lot of suffering.

You've done this job for four years now. Even the opposition say you're an extremely committed European. Do you think you were just unlucky with the timing of your Commission presidency?

No, I know the history of the Commission very well. I recently read through all the criticism President Jacques Delors had to endure. Back then, people didn't all have the same picture of him as they do now. No, slowly but surely we've managed to pull ourselves out of the economic and financial crisis. There are more jobs in Europe, there's less unemployment, and the budget deficit has dropped considerably from 6 percent of GDP at the start of my term in office to 0.8 percent now. We launched an investment plan — the Juncker Plan, as people used to call it. Now that plan has proven successful, it's not really referred to as the Juncker Plan anymore, but the European Fund for Strategic Investments. So no, it's not all doom and gloom, there's also a lot of light.

Jean-Claude Juncker has served as president of the European Commission since 2014. Prior to taking up the post, he was the prime minister of Luxembourg from 1995 to 2013.