Donald Trump: 'Nobody treats us much worse than the EU'

The comments targeting the trans-Atlantic relationship come as US-EU trade negotiations are in an early stage. In July, the two sides agreed to de-escalate a brewing trade fight. 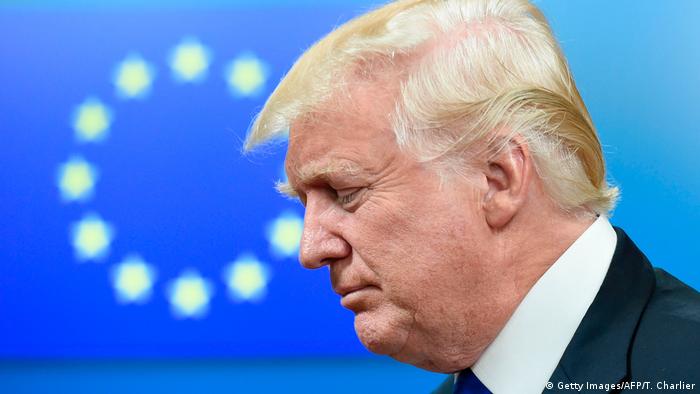 US President Donald Trump on Sunday again railed against the trans-Atlantic trade relationship, claiming that "nobody treats us much worse than the European Union."

"The European Union was formed in order to take advantage of us on trade, and that's what they've done," Trump said in a televised interview on CBS.

Trump and European Commission President Jean-Claude Junker agreed in July to reduce trade tensions and work toward elimination of tariffs on industrial goods. Both sides also agreed no new tariffs would be imposed as trade talks continue, taking US threats to impose levies on European auto imports temporally off the table.

The ceasefire tamped down escalating trans-Atlantic trade tensions that threatened to morph into a tit-for-tat trade fight as witnessed between the US and China. An unorthodox Trump administration trade strategy with Mexico and Canada led the three sides to reach a new trade deal earlier this month.

Trump said his hard-handed tactics against the EU were not hostile toward America's allies.

"You know what's hostile? The way they treat us. We're not hostile," Trump told CBS journalist Lesley Stahl after she suggested the administration was behaving in a hostile manner toward US allies.

Trump continued that he liked NATO now that alliance members have vowed to increase defense spending.

"Now, I like NATO, NATO's fine. But you know what? We shouldn't be paying almost the entire cost of NATO to protect Europe. And then on top of that, they take advantage of us on trade. They're not going to do it anymore. They understand that," he said.

The trade agreement Jean-Claude Juncker managed to reach with US President Donald Trump has drawn cautious praise in Europe. How did he do it, and what will it mean for the EU? DW's Bernd Riegert reports. (26.07.2018)

Agricultural trade will remain off the table in any trade talks between the US and EU, the EU chief said. A European commitment to buy more US soybeans is driven by market conditions not political intent. (28.07.2018)