Agricultural trade will remain off the table in any trade talks between the US and EU, the EU chief said. A European commitment to buy more US soybeans is driven by market conditions not political intent. 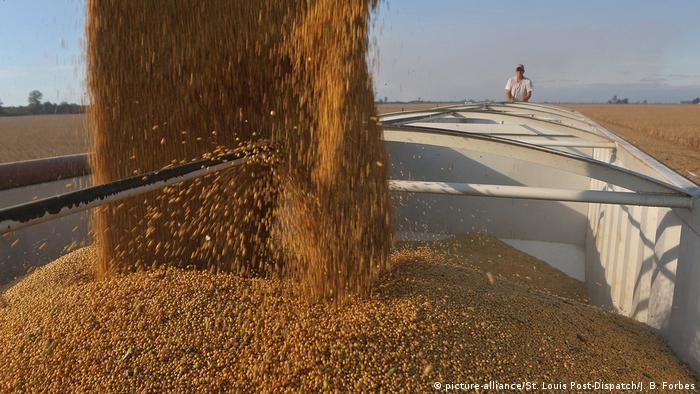 US President Donald Trump and his administration applied "massive pressure" on the European Union to open up its markets to American agricultural products, the EU executive said in an interview in Brussels with Germany's ARD broadcaster.

Juncker said that he rejected the demand to completely open European markets to US agricultural products, with only an exception for soybeans.

European farmers, which are not major soybean producers, do not need to worry about competition from the United States, he said.

At a meeting in Washington on Wednesday, Juncker and Trump agreed the US would hold back on threats to apply tariffs on the auto sector as the two sides conduct negotiations.

The "deal" is short on details and commitments, but includes talks intended to eliminate tariffs on industrial goods. It also extends talks on aluminum and steel after the US imposition of tariffs resulted in the EU unleashing retaliatory measures.

The EU also agreed to work towards purchasing US liquefied natural gas and upping soybean purchases.

The European commitment to buy more soybeans allowed Trump to claim victory among a key constituency ahead of November's mid-term election.

"We just opened up Europe for you farmers. You're not going to be too angry with Trump, I can tell you," he said Thursday in the farming state of Iowa.

In some ways, it was a victory on a self-inflicted problem. American soybean producers have been badly hit after China slapped restrictions on imports in response to US tariffs.

Restrictions on the US farmers' largest export market have caused sales and prices to drop, as China reached out to Brazil and Argentina to replace US soybean imports.

The damage to US farmers prompted the Trump administration earlier this month to announce $12 billion (€10 billion) in farm subsidies, mostly to soybean growers.

However, the European offer to buy more soybeans is driven more by market conditions than a political commitment.

Juncker said that an EU intent to buy more soybeans helped to convince Trump to call a truce on the tit-for-tat trade dispute.

At the same time, he recognized that the European Commission is in no position to dictate to EU member states and companies to buy more soybeans.

"Anyone who thinks that the Commission could decree who imports what from where, overestimates the capabilities of the Commission. Market events, especially prices, dominate the ​​soybean sector," he said.

The EU is the world's second largest soybean importer after China.  Imports come mostly from Brazil and the United States, but with Chinse competition for Brazilian soybeans and lower prices in the US, European soybean traders were already expected to buy more from the American market.

Agricultural trade negotiations have traditionally been the hardest in international free trade talks due to political sensitivities. The sector is subject to a host of non-tariff barriers to trade, government subsidies and varying environmental and health regulations.

Trade talks with the EU are complicated by the fact that all 28-member states must agree to a trade deal. The French have already ruled out any possibility of eliminating barriers to US agricultural products.

Donald Trump willing to slap tariffs on all Chinese imports

US President Donald Trump has hit out again at US trading partners, indicating he is ready to impose tariffs on every product imported from China into America. Trump also ramped up attacks on the EU and Federal Reserve. (20.07.2018)

German politicians and business leaders have welcomed the agreement that Jean-Claude Juncker made with Donald Trump. But some wonder whether the US president will stick to his word. (26.07.2018)