The trade agreement Jean-Claude Juncker managed to reach with US President Donald Trump has drawn cautious praise in Europe. How did he do it, and what will it mean for the EU? DW's Bernd Riegert reports. 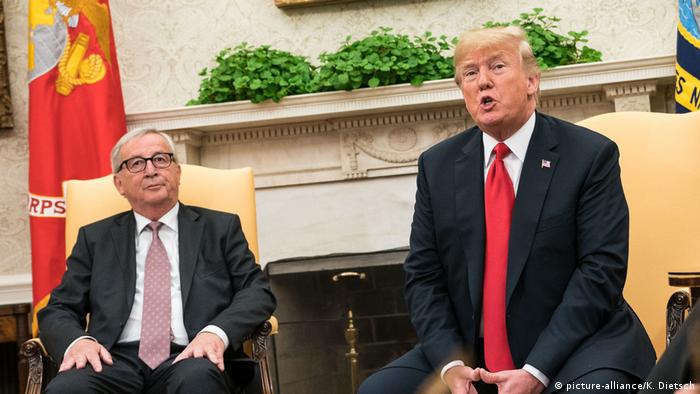 The tweet from Donald Trump that followed his meeting with European Commission President Jean-Claude Juncker was benevolent in tone, unlike after the G7 summit or the latest NATO meeting. Several hours after his guest had left the White House, the president of the United States was praising the joint declaration the two reached in an effort to avoid a trans-Atlantic trade war.

"European Union representatives told me that they would start buying soybeans from our great farmers immediately. Also, they will be buying vast amounts of LNG!" Trump wrote on Twitter. In another tweet, he added how it was "great to be back on track with the European Union."

It was a stunning turnaround. Just days before, Trump wrote that tariffs were the "greatest" when negotiating trade policy. Now, the goal with the EU is zero tariffs on industrial goods, with the exception of cars.

So how exactly did Juncker manage to coax this about-face from Trump?

"This is the success of Jean-Claude Juncker and the EU," said European Parliament MP Markus Ferber of Germany's conservative Bavarian party, the CSU. "Pressure has a sort of learning effect on Donald Trump. It's good that there's now increasing recognition of the fact that the US can only be strong if it has strong partnerships."

Soybeans the key to compromise

Trump is selling the agreements on soybeans and liquefied natural gas, or LNG, as a success. The EU is letting him have the triumph, though the economic effects of these promises are negligible, according to German economic expert Peter Bofinger.

In an interview with broadcaster Deutschlandfunk on Thursday, he explained that the EU imports almost all of the soybeans it requires for animal feed from Brazil and the US. After Trump imposed punitive tariffs on China, the Chinese government drastically cut back its soy imports from the US, turning instead to Brazil. Any resulting shortfall in Brazil's supplies to the EU will now be filled by US suppliers. The trade channels have switched, but basically, not a single soybean more is being sold. 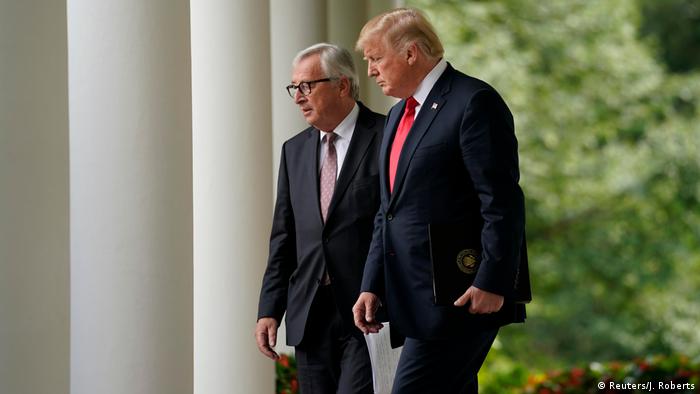 Unlike previous meetings at the G7 and NATO summits, Juncker and Trump were friendly in Washington

EU officials have confirmed that Washington was insistent on putting soybeans in the agreement. But they also confirmed that Juncker can only make rather vague promises in this regard. The European Commission doesn't buy any soybeans — that's done by animal feed producers and grain importers. European Commission spokesperson Alexander Winterstein said in Brussels that although US soybeans generally come from genetically modified plants, food safety in the EU would not be impacted.

Gas business to be expanded

The same applies to LNG, which Trump is determined to sell in the EU. Two years ago, Brussels agreed to a concept to increase imports of LNG. In terms of both the amount and the price, LNG from the US cannot compete with natural gas from Russia, delivered by pipeline. Speaking before the press, Trump was heard quoting phrases that have long been part of the EU's repertoire. "Liquefied gas will help the EU to diversify its supply sources," he said.

On the LNG market, Washington is mainly competing with cheaper suppliers from Africa and Australia — some of which demand only half the price asked by US exporters, according to the International Gas Union lobby group. In 2017, LNG accounted for just under 10 percent of the global gas supply.

An EU official present for Juncker's talks with Trump in Washington noted that the two leaders' joint agreement says the EU "wants" to buy more LNG from the US, but it is a "declaration of intention" rather than a commitment towards that end.

Eliminating customs duties and trade barriers on as many goods as possible had long been a goal of both the EU and the US for years during negotiations for the comprehensive Transatlantic Trade and Investment Partnership, or TTIP. When Trump came into office in 2017, his administration froze TTIP talks — at that time, negotiators were at the point of reducing tariffs for industrial goods and vehicles almost to zero. Now, EU Trade Commissioner Cecilia Malmstrom says that a working group of EU and US representatives is being convened to pick up those talks where they left off.

However, the EU official present at the talks in Washington told DW that the deal between Juncker and Trump "does not in any sense amount to resuscitating TTIP," but rather opens up the possibility of an ad hoc agreement.

Reacting to Wednesday's deal, French Finance Minister Bruno Le Maire demanded that any negotiations with the US be based on reciprocity. Ahead of Juncker's trip, the French government urged the EU not to conduct any talks "with a gun to its head," meaning punitive US tariffs on steel and aluminum. But now Washington says it's willing to talk about those tariffs, even though they remain in force.

Read more: Who does Europe call if it wants to call America?

The European Commission spokesperson said the deal between Trump and Juncker had been reached "with the full agreement" of the bloc's member state governments. "Of course this was Europe speaking," Winterstein said. The European Commission president had always said he would negotiate with the US president on an "equal footing," and, Winterstein added, "that's exactly what he did."

But Bernd Lang, the chairman of the European Parliament's trade committee and a member of Germany's center-left Social Democratic Party, was critical, saying that in Washington there'd been "lots of talk with little to show for it."

The US threat of punitive tariffs on metals and cars remains, he said, adding: "That is very regrettable, and not a good basis for concrete negotiations."

Winterstein, however, rejected that criticism. "The fact that there will be no immediate tariffs on cars is a big success, as is the willingness [by the US] to reconsider the tariffs on steel," he said.