The IMF has cut its global economic forecast for 2018 and 2019, citing above all rising import tariffs between the US and China. A fall in trade volumes and manufacturing orders could hit Germany particularly hard. 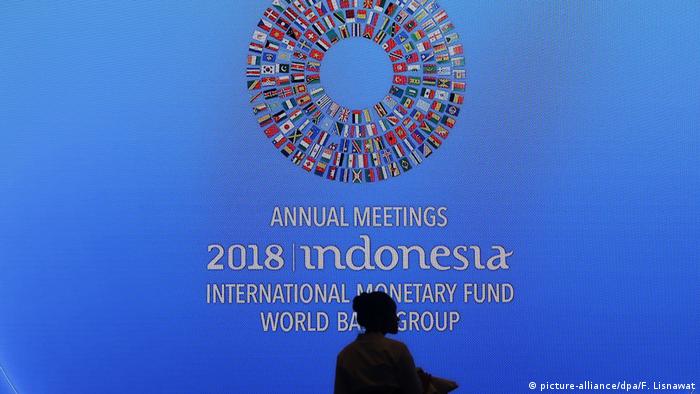 The International Monetary Fund (IMF) on Tuesday downgraded its outlook for the world economy, warning that the imposition of import tariffs between the US and China were taking its toll on global trade.

The IMF's World Economic Outlook report, unveiled on the eve of its upcoming summit in Bali, Indonesia, estimated that global growth in 2018 would reach 3.7 percent, the same as the previous year but lower than the 3.9 percent it had forecast earlier this year.

It also slashed its outlook this year for 19 countries, including several eurozone member states and emerging markets.

Growth in both the United States and China were expected to slow next year as a result of the trade dispute triggered by US President Donald Trump.

China was set to grow by 6.2 in 2019, down from the 6.4 percent projected last July. Both figures would mark the slowest rate of Chinese expansion since 1990, when its growth rate was slashed in the aftermath of the violent suppression of pro-democracy protests.

The IMF warned that China's growth even risked declining by a full percentage point by next year in the event of a "worse-case" scenario, involving further tariffs coupled with a collapse in confidence by businesses and markets.

Beijing policymakers were navigating a "difficult trade-off between growth and stability," the IMF said in a statement.

US growth this year remained steady at 2.9 percent but is set to slow in 2019 as the effect of Trump's sweeping tax cuts wear off and the trade dispute with China begins to set in.

"The forecast does not incorporate the impact of further tariffs on Chinese and other imports threatened by the United States, but not yet implemented, due to uncertainty about their exact magnitude, timing, and potential retaliatory response," according to the IMF.

Global trade tensions would also have a bearing on the eurozone's 2018 growth forecast, which was cut to 2 percent from 2.2 percent previously.

A drop in manufacturing orders and trade volumes would hit Germany particularly hard, the IMF report warned. German growth was revised down to 1.9 percent in both 2018 and 2019 due to a slowdown in exports and industrial production.

The UK economy, meanwhile, is expected to grow 1.4 percent this year and 1.5 percent in 2019 — falling behind almost all of Europe, with the exception of heavily-indebted Italy.

UK growth has been drastically cut in the aftermath of the Brexit vote; uncertainties surrounding the country's divorce from the EU have stymied investment and seen part of its key financial sector relocate to the continent.

While tax cuts and increased spending have seen an immediate upswing in US growth, the IMF warned that the country could face an unwelcome "inflation surprise," which would prompt the Federal Reserve, America's central bank, to hike rates at a faster-than-expected pace.

IMF chief economist Maurice Obstfeld said in a statement that, although emerging markets had not yet seen a generalized pullback of capital, "there is no denying that the susceptibility to large global shocks has risen."

Any major economic shock in developing nations would also come to bear on leading economies, including the US. "Any sharp reversal for emerging markets would pose a significant threat to advanced economies," said Obstfeld.