Investor shakeout in Turkey and Argentina: why it′s happening | Business | Economy and finance news from a German perspective | DW | 28.05.2018

Investor shakeout in Turkey and Argentina: why it's happening

Investors, chasing better returns in US dollars, have forced the two countries' currencies into free fall. The big question is whether the rout can threaten financial markets and the global economy medium-term. 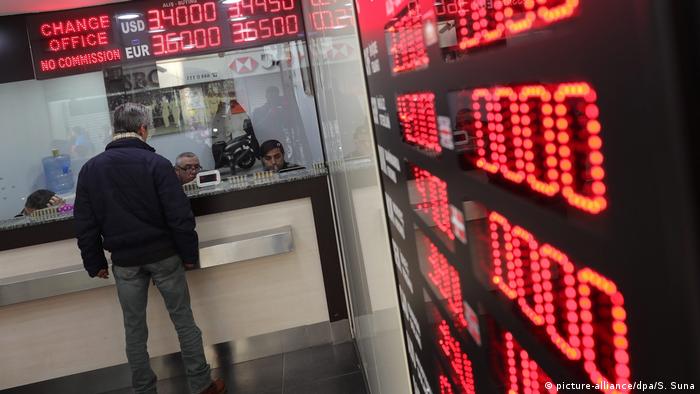 The words "taper tantrum" are etched into the memory of most financial market analysts. The phrase describes the bout of panic selling in the spring of 2013 after former US Federal Reserve Chairman Ben Bernanke announced that the central bank would begin to reduce its billion-dollar bond purchases.

In the days that followed, bond prices collapsed and yields skyrocketed. The effects were felt most strongly in emerging markets, where domestic currencies were forced into free fall by the outflows of capital.

A similar pattern has emerged in recent weeks, where the Turkish lira, Argentine peso and South African rand have lost a great deal of their value. The US — with its move towards higher interest rates — is once again contributing to the problem, forcing capital to chase a subsequent rally in the dollar.

"At the moment, it is the strong dollar that is putting pressure on these currencies. All currencies are being affected, but this weakness is particularly pronounced in emerging markets," says Antje Präfke, a currency expert at Commerzbank.

Today's situation is quite different from the rout in 2013; after all, the markets have had years to adjust to the Fed's unwinding of its bond purchase program introduced to support the US economy in the wake of the financial crisis. As well as reducing the size of its balance sheet, the Fed has raised key US interest rates in several steps.

The US central bank — perhaps having learnt from the fallout of the so-called taper tantrum — has taken its time in raising rates, and has repeatedly, and gently, prepared the markets for the return to normal interest levels.

But still, yields on US government bonds have also begun rising. Interest rates on 10-year US bonds currently hover around the 3 percent mark. Suddenly, these securities are more attractive for investors, who have been quitting emerging markets for better opportunities elsewhere.

The risks for those countries that have seen large outflows are not equal though. "We now have a fundamentally more solid environment for emerging markets. Only certain countries are struggling with major problems," says Mauricio Vargas, economist at Union Investment.

One example is Turkey, which critics say is fast becoming an authoritarian presidential state under Recep Tayyip Erdogan.

Inflation in Turkey is climbing at around 10 percent, which led the central bank on May 23 to raise interest rates to 16.5 percent from 13.5 percent. That's despite Erdogan's threat to increase his influence on the central bank to prevent rate hikes.

The Turkish lira has been falling for months — and its tailspin has been exacerbated by the president's remarks.

Most observers believe Turkey's economic and currency issues are mostly homemade, even if Erdogan won't admit it. His lack of economic insight could serve to worsen the problem, they say.

A weak currency means imports to Turkey, including fuel, will become more expensive. Ordinary Turks can only watch as the purchasing power of the lira goes down the drain due to inflation.

Argentina and the IMF

Argentina also finds itself in the throes of another financial crisis, forced to beg the International Monetary Fund (IMF) for financial aid. The nation experienced an economic depression at the turn of the century, which saw the government default on its debt.

In the past two weeks alone, the Argentine peso has plummeted by more than 10 percent against the world's leading currency, the dollar.

Like Turkey, Argentina has a large trade deficit, public debts are rising, and prices are skyrocketing — the IMF is expecting inflation of 23 percent this year.

To prevent further capital outflows, earlier this month the Argentine central bank raised the key interest rate from 27.5 to 40 percent.

Fortunately the investor shakeouts appear confined to a handful of countries. Other emerging markets may well adapt to rising US interest rates without creating major upheavals.

But some pressure will likely persist as US interest rates continue to rise — making dollar investments more attractive, while other currencies and regions become more and more unappealing.

The global emergency lender sees the world economy on a robust growth path in the coming two years. However, that outlook faces a severe risk if trade tensions between the US and China escalate in the month ahead. (17.04.2018)

Fed moves to prevent US economy from overheating

The US central bank has raised interest rates by a quarter-point at its first policy meeting under Chairman Jay Powell and signaled more hikes are coming in response to tax cuts and higher government spending. (21.03.2018)

The Russian ruble has continued its downslide days after the US imposed sanctions on another group of Russian tycoons. Officials in Moscow have been out to calm markets, saying the fall is only temporary. (10.04.2018)