Trade frictions could cause ′major recession in Germany′ | Business| Economy and finance news from a German perspective | DW | 27.09.2018

Trade frictions could cause 'major recession in Germany'

Germany's leading economic institutes have warned a protracted trade conflict with the United States could have dire consequences for Europe's economies. Jobs and prosperity are at stake, the think tanks argued. 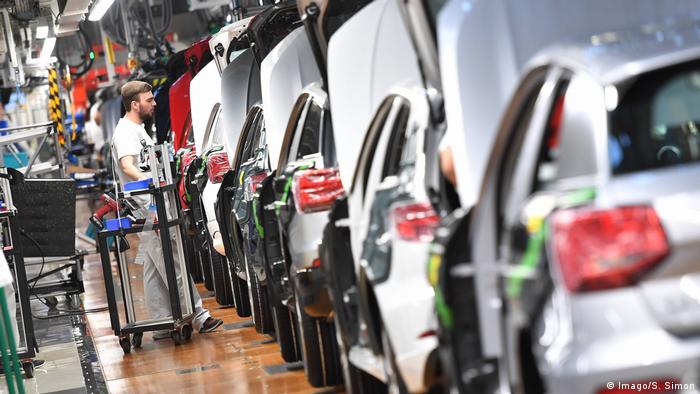 Any escalation of trade friction involving the United States could cause a major recession in Germany and the whole of the European Union, Germany's leading economic institutes warned Thursday while presenting their latest outlook.

The think tanks said US President Donald Trump's threat to impose higher tariffs on car imports from the European Union would, if enacted, cost a lot of jobs and harm productivity and prosperity particularly in Germany.

In Germany, one in three jobs depends on exports, making the nation particularly vulnerable if hit by additional US tariffs on car imports, given the large size of the automotive sector.

Tensions rose last month after the US president rejected an offer from Brussels to eliminate auto tariffs altogether.

The institutes also cited currency crises in Turkey and Argentina and the possibility of Britain leaving the EU without a deal as economic threats to Germany.

The think tanks cut their 2018 GDP growth forecast to 1.7 percent from a previous estimate of 2.2 percent, and said they expect the economy in Europe's powerhouse to expand by 1.9 percent next year.

"Demand from abroad has weakened, and at the same time companies are having increasing difficulty finding enough workers for their production," Roland Döhrn of the Essen-based institute RWI said in a statement.

A Game of no rules: The deceptive promise of free trade

Donald Trump's man in Brussels extends a hand to the EU

President Donald Trump is actually a "huge fan" of Europe, insists new US Ambassador to the EU Gordon Sondland. It's the trade deficit he despises. DW's Teri Schultz talks to Sondland in his first Brussels interview. (25.09.2018)