The UK and the EU cannot find common ground on Ireland and future trade. The EU has accused Britain of trying to cherry-pick parts of the union it wants to keep. 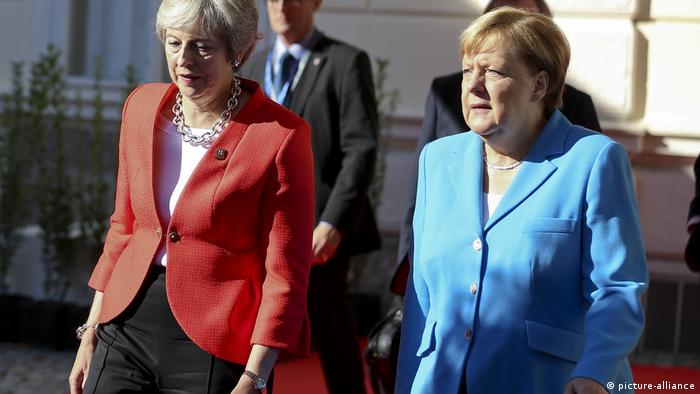 Although the atmosphere in the Austrian city of Salzburg was friendly on Thursday, it appeared that the UK and the EU were no closer to solving the most intractable issues at hand: how to avoid imposing a harder border on the island of Ireland and how to handle future trade.

Concern was mounting at the informal summit that no final Brexit deal would be approved ahead of the March 31, 2019 deadline and that there would be no plan for a smooth and orderly British exit from the bloc.

"Everybody shared the view that while there are positive elements in the [UK] proposal, the suggested framework for economic cooperation will not work, not least because it risks undermining the single market," said European Council President Donald Tusk.

However, moments later, British Prime Minister Theresa May said that her plan was the only "serious and credible" one on the table.

Matching repeated similar messages from May's side in recent weeks, Dutch Prime Minister Mark Rutte said that the EU had "made more preparations for a no deal."

Irish Prime Minister Leo Varadkar also said that his government was making large-scale preparations for the event of a "No Deal Brexit."

Some consensus on Ireland, none on trade

While both Britain and the EU agree that imposing a hard Irish border would threaten a very hard-won peace on the island, May insisted that there was no way she could allow anyone to "divide the United Kingdom into two customs territories."

She promised that the UK would be putting forward its own proposal for the Irish border soon. The current border proposal is only a so-called "backstop," to be implemented in the case of a no-deal Brexit. Both sides aim to reach a deal that solves the issue.

As for trade, there remained little agreement between the two parties. May has sought to arrange for continued free movement of goods despite otherwise leaving the single market, but the EU has been firm that the UK is not allowed to cherry-pick.

An official EU summit set for October 18-19 was previously considered the "last chance" for a formal Brexit deal, as any plan must be approved by the UK Parliament, the European Parliament, and the individual legislatures of all 27 remaining EU member states. However, leaders are now preparing for an extended timeline.

"It was clear today that we need substantial progress by October and that we then aim to finalize everything in November," said German Chancellor Angela Merkel. "There is a lot of common ground on the basis of [the UK plan], especially in the area of domestic security and also foreign cooperation and other issues, but there is still a lot of work to do on the question of how future trade relations will look."

It's a thankless task trying to keep up with the daily dose of bizarre comments made by leading Brexiteers. DW's Rob Mudge has made a valiant effort to wade through some of the madness. (20.09.2018)

BMW has moved forward the annual shutdown of its Mini plant in Oxford to coincide with the UK's EU withdrawal date. The German carmaker said it hoped to guard against any supply hiccups in case of a no-deal Brexit. (18.09.2018)

One of the opposition Labour Party's senior members, Khan joins a growing list of politicians in favor of a second vote on EU membership. His call comes amid a deepening split over the government's Brexit proposals. (16.09.2018)