The EU and the UK look no closer to a deal, as UK Prime Minister Theresa May has ruled out a second referendum and has urged the EU to "evolve its position." A Brexit summit will be held in November, leaders announced. 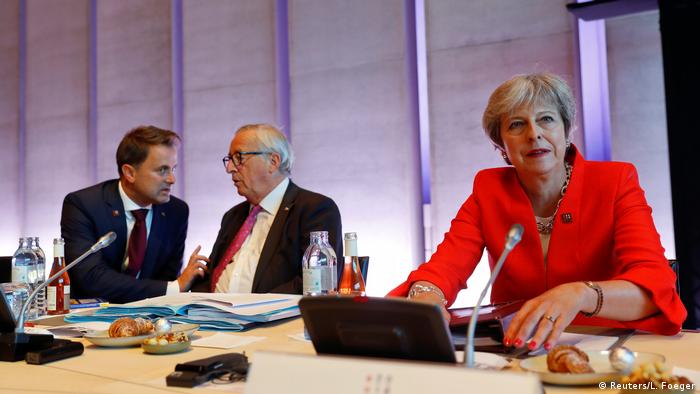 European leaders gathered in the Austrian city of Salzburg on Thursday for the second day of an informal summit. One of the main issues is the deadlocked negotiations on Brexit, the final agreement on which was supposed to be inked in October. On Thursday, however, EU leaders announced a special Brexit summit is to be held in November.

The other major talking points are immigration, a major policy point for Austrian Chancellor Sebastian Kurz, whose government holds the rotating EU presidency, and security in the bloc.

UK Prime Minister Theresa May told EU leaders on Wednesday that Britain has "put forward serious and workable proposals" and that it was now up to the EU to "respond in kind" and "evolve its position."

What the key players said at the summit:

Austrian Foreign Minister Karin Kneissl told DW that while the EU member states disagreed on many things, there was "no friction when it comes to Brexit. There is a high degree of cohesion."

Irish Prime Minister Leo Varadkar:  Ireland is a country that obviously wants to avoid a no-deal scenario...[but] we are preparing for that, we are hiring extra staff and officials, putting in IT systems, we're ready for that eventuality should it occur."

European Commission President Jean-Claude Juncker: "It was interesting, it was polite, it was not aggressive. She [May] is doing her job."

EU Council President Donald Tusk: Despite progress in some areas, on the two thorniest issues of the Irish border and post-Brexit trade ties, "the UK's proposals will need to be reworked." He said a no-deal scenario was "still quite possible."

French President Emmanuel Macron: "We [the EU] need to continue to act as a group, make sure we approach this as the EU-27." He stressed that a "solution needs to be found, but it shouldn't jeopardize the coherence and the four freedoms of the single market."

Brexit as it stands

A major summit planned for October 18 was being treated as the last chance for a concrete deal for Brexit, which is supposed to go into effect on April 1. The November summit announced on Thursday is now seen as the deadline to reach a deal, which will have to be ratified by the EU legislature, all member states' parliaments, and the UK Parliament.

May has put paid to hints within her own government on a possible second referendum on Brexit, telling EU leaders that it is not an option.

The two main sticking points that remain unsolved are:how to regulate the border between Northern Ireland, which is part of the UK, and the Republic of Ireland, which is an independent EU member, as well as Britain's future trade negotiations with the EU. May told EU leaders that she won't accept an EU proposal for Northern Ireland to remain in the customs union while future trade ties are being negotiated.

Migration to the EU

EU leaders are also under pressure to come up with a compromise on immigration, after a joint summit in June produced a deal scant on details.

While most countries agree on strengthening the border control agency Frontex, they still disagree on suggestions to redistribute refugees proportionally throughout the bloc. Countries like Poland, the Czech Republic and Hungary do not look likely to change their hard-line stance against this plan.

There are also disagreements across the bloc about which North African countries can be relied upon to set up schemes to stop migrants attempting the dangerous sea crossing to Europe, although many have praised Egypt for its efforts thus far.

European Council President Donald Tusk accused member states of playing "the migration blame game" and urged them to create a bloc-wide solution to the issue.

Germany's Angela Merkel has praised Algeria for its "constructive cooperation" in repatriating rejected asylum-seekers. Merkel's Algeria visit comes ahead of an EU leaders' summit, where migration is certain to dominate. (17.09.2018)

One of the opposition Labour Party's senior members, Khan joins a growing list of politicians in favor of a second vote on EU membership. His call comes amid a deepening split over the government's Brexit proposals. (16.09.2018)