The German chancellor and her Austrian counterpart, Sebastian Kurz, have agreed to stem migrant arrivals to the EU. European leaders are under pressure after the main route across the Mediterranean shifted. 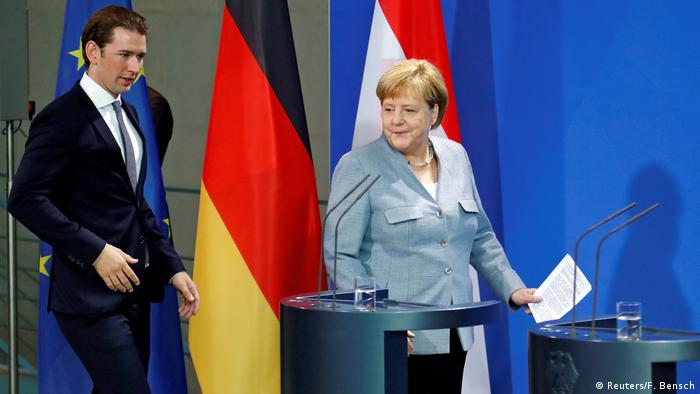 Both leaders emphasized the need to bolster Frontex, the EU's border management agency

German Chancellor Angela Merkel and her Austrian counterpart Sebastian Kurz appeared to put aside their differences on Sunday, as the two leaders announced a series of efforts aimed at combating irregular migration to Europe.

The pair agreed to collaborate with several African nations to stem migration flows and welcomed plans by European Commission President Jean-Clause Juncker to bolster Frontex staff to 10,000 by 2020.

Although Merkel and Kurz have previously clashed on migration, Austria's anti-immigration chancellor acknowledged that Berlin had adopted a harder line, thanks in large part to German Interior Minister Horst Seehofer.

Ahead of Sunday's meeting, a spokesman for Austrian chancellery said strengthening the EU's external borders would be a focal point in the discussions in Berlin.

"There can be no open borders within Europe without proper protection of external EU borders," Kurz said in remarks provided to the DPA news agency by his spokesman. "That's why it is so important to strengthen Frontex."

Following the last formal EU leaders' summit in June, the Commission vowed to boost the bloc's border management agency Frontex, and establish migrant processing centers on the European periphery and in North Africa. Those proposals have yet to be translated into policy.

Kurz said he and Merkel agreed that "we have to work out the details of the turning point that we achieved" in June.

Austria, which currently holds the rotating European Council presidency, said the summit would focus on improving economic ties between the two continents in a bid to tackle one of the drivers of migration to Europe.

Merkel also stressed the need to engage with the African countries of origin. Areas for collaboration between the EU and the 53 African countries must be clearly defined, the German chancellor said, since "nobody can be expected to have to deal with everything."

Merkel is expected to visit Algeria on Monday. The Austrian chancellor is also set to hold talks with French President Emmanuel Macron in Paris on Monday, ahead of next week's EU leaders' summit in Salzburg.

German Chancellor Angela Merkel is receiving her Austrian counterpart Sebastian Kurz in Berlin. It is one of her last official meetings as chancellor before she steps down from her role.