It's a thankless task trying to keep up with the daily dose of bizarre comments made by leading Brexiteers. DW's Rob Mudge has made a valiant effort to wade through some of the madness. 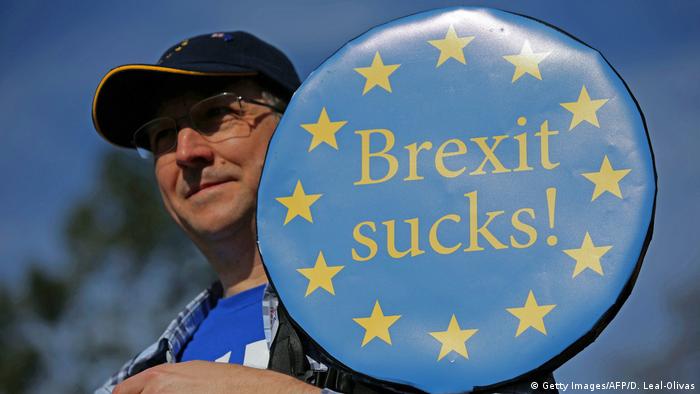 I should start by saying that I'm a Brit who's enjoyed what I thought was the best of both lives in Germany and the UK. I've toyed with the idea of enjoying retirement in a picturesque, sleepy village somewhere in the English countryside, popping down to a proper pub for a banter with the locals.

And then I woke up. In the early hours of June 24, 2016 I came into the office fully expecting to make some minor tweaks to my EU referendum op-ed that Desperate Dave's (then Prime Minister David Cameron) gamble had somehow paid off: The UK had voted to stay in the EU.

But obviously things didn't turn out as planned. Since then I've been in a state of catatonic shock. My hair, previously a delicate shade of gray (ok, I tell a lie), has now turned completely white. And my incredulity seems to grow exponentially with each day that passes at the confusing, contradictory, comical and downright conceited statements made by some leading Brexit proponents.

Here are a few tidbits for your delectation.

How to ruin the economy

One of the chief culprits is, of course, Prime Minister Theresa May. Here's what she said as then home secretary a month before the referendum: "I think the economic arguments are clear. I think being part of a 500-million trading bloc is significant for us. I think that one of the issues is that a lot of people will invest here in the UK because it is the UK in Europe. If we were not in Europe, I think there would be firms and companies who would be looking to say, do they need to develop a mainland Europe presence rather than a UK presence? So I think there are definite benefits for us in economic terms."

Now fast forward to 2018: "If we were excluded from accessing the single market, we would be free to change the basis of Britain's economic model." Change it to what? One that doesn't work? One that hemorrhages jobs, trade and growth?

One name you've probably come across in recent Brexit coverage is Jacob Rees-Smug, er, Mogg. Rees-Mogg is a partner in the fund management company Somerset Capital. They've just set up a new fund in Dublin so that they can continue to serve EU-based clients after Brexit and continue to fill Rees-Mogg's coffers. But that's alright because the Tory MP has worked out that a no-deal Brexit will boost the UK economy by £1.1 trillion over 15 years! I'm still trying to figure out how that works when most serious economists predict a 7 percent decline in GDP over that period. Will keep you posted.

Not to be outdone, Boris "I-know-how-divorces-work" Johnson, the former foreign secretary, came up with a completely new business strategy called "f**k business." He outlined his cunning plan when asked about concerns raised by Airbus and BMW over the threat to jobs and investment. His successor, Jeremy Hunt (previously opposed to Brexit), is obviously a big fan and said "threats" by business were "completely inappropriate." Exactly. I mean, what were they thinking? Surely they're just "making it up" and "scaremongering?"

Which brings me to a certain Bernard Jenkin and believe me, I'm not making this up. Earlier this week Jaguar Land Rover (JCR) chief executive Ralf Speth warned of massive Brexit-related job losses in the car industry. That prompted Tory Brexiteer Jenkin to accuse him of "lying" and "scaremongering." A few hours later JCR announced it was cutting output and putting workers on a three-day week until Christmas. Hmm...

But, wait, you're going to love this: "I never actually wanted to leave the EU." Jenkin, the Brexiteer, said that. On BBC Radio 4's Today program. On Wednesday. 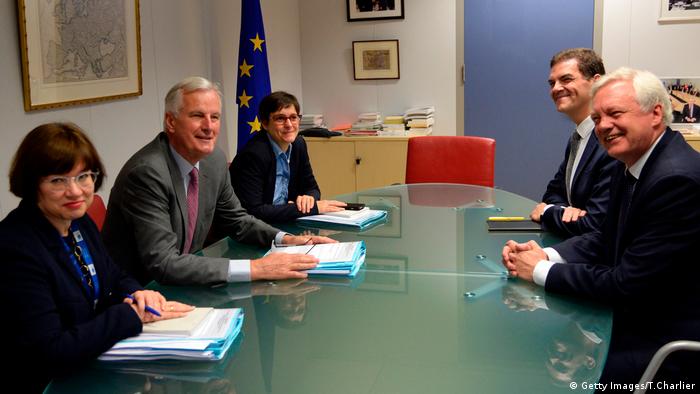 "Sorry, I forgot to bring my notes. But I'll just make it up as we go along — can't be that hard"

The wonderfully named Department for Executing the European Union (spot the deliberate mistake) was created to ensure a, er, smooth exit from the EU. Things are going really well. It's already on to its second secretary of state in the space of two years. One of the most indelible images I have of David Davis is from a meeting he had early on in his tenure with his EU counterpart, Michel Barnier. The EU side looks well-prepared with thick piles of papers, whereas Davis is sitting there without any notes or position papers as if to say: "This'll be a walk in the park." Indeed he said as much back in October 2016: "There will be no downside to Brexit, only a considerable upside." Well, ok. I actually think leaving the EU is a stupid idea, but if you say there's an upside, I'm listening...oh, hang on, here he is again: "Nobody has ever pretended that this will be easy." (September 2017). But...but you did.

Getting back briefly to the upside. This is what a leaked police document has to say about that: A no-deal Brexit could lead to the "real possibility" of police calling on the military to help with civil disorder. Contingency plans are being drawn up by police chiefs if there is chaos on the streets due to shortages of goods, food and medicine. The document prepared by the National Police Co-ordination Center warns of traffic queues at ports with "unprecedented and overwhelming" disruption to the road network.

No, this is not some Third World country we're talking about (well, not yet).

Anyway, I digress. Getting back to the Department That Couldn't Organize a Piss-up in a Brewery. Davis' successor is Dominic Raab, who has effectively been sidelined by the prime minister after she said she would be taking control of the negotiations. Which appears just as well, given Raab's recent comment on the "Andrew Marr Show": "Forgive me if I don't keep a laser-like focus on the substance."

Of course you're forgiven. No one can expect you to do your job and be familiar with all that Brexit piffle. 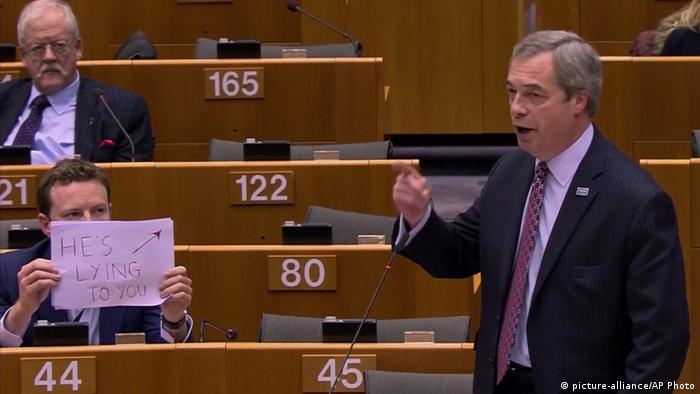 "Brexit will be great for the UK...actually, maybe not...oh, whatever"

At this stage you may be thinking: Where's Farage in all this? To be honest, I thought it would be too obvious to include Nigel, but if you insist: In June 2016 he said a no-deal Brexit "would be better and cheaper for this country than where we currently are." Can't see it myself, but if you say so...oh, hang on: "Brexit isn't some magic cure" and it could leave Britain worse off (June 2018).

This is by no means an exhaustive list. But it's left me exhausted. I feel like throwing up. Or throwing myself out of the window.

I'll leave you with this from Trade Minister Liam Fox: "The free trade agreement that we will have to do with the European Union should be one of the easiest in human history" (July 2017).

"It's 60-40 percent likely that we will crash out without a deal and I can't promise life will be rosy after Brexit" (August 2018).

German journalist released from prison in Iraq 7h ago

Opinion: Time for high-emitting Australians to vote for real climate action 16h ago