UK Prime Minister Theresa May has appointed a Euroskeptic junior housing minister, Dominic Raab, as Britain's new Brexit Secretary. The 44-year old Raab was a prominent Leave campaigner ahead of the Brexit vote in 2016. 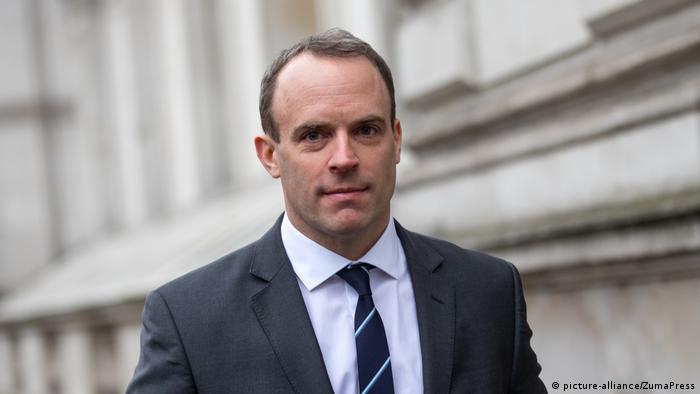 Britain's ex-housing minister Domic Raab was named new Brexit Secretary on Monday, as Prime Minister Theresa May sought to reassert control over her cabinet. The move comes after his predecessor David Davis resigned, criticizing May's policy in Brexit talks with the EU.

"The Queen has been pleased to approve the appointment of Dominic Raab MP as Secretary of State for Exiting the European Union," May's Downing Street office said in a statement and on Twitter.

Who is Raab and why is he taking over?

- Davis departed two days after May's allies said she managed to unite her Cabinet behind a joint Brexit strategy.

- The new Brexit secretary, Raab, was once mentored by Davis and later worked in the UN's Hague war crimes tribunal.

- Raab campaigned for "Leave" ahead of the 2016 vote on the UK leaving the EU.

- He has urged an aggressive approach in the EU talks.

- The Davis - Raab reshuffle comes just nine months before the UK is set to complete the separation process.

Why did Davis resign?

Davis, who has been appointed Brexit Secretary two years ago, criticized May in the media for being too compliant and giving "too much too easily" with her latest Brexit strategy.

The policies would leave Britain in "at best a weak negotiating position, and possibly an inescapable one," he said in his resignation letter.

Commenting on Davis' departure, Germany's Deputy Foreign Minister in the Foreign Ministry, Michael Roth, told DW the move was "anything but encouraging."

The latest blow to Theresa May shows that the UK government is still divided over its strategy in the talks with the EU, he added.

"However, the negotiations have been going for a long time, and they need to be concluded," Roth said.

On Monday, the European Commission said it would continue talks with the UK.

"The schedule, as everybody knows, is tight, we are available 24/7," a spokesman for the European Commission told reporters, adding the Commission chief Jean-Claude Juncker and May had spoken on the phone on Sunday.

May has been struggling to present a united front on London's side in the tough Brexit talks, and Davis' departure could further undermine her authority in the Conservative party.

France shutters mosque in Paris after teacher's beheading 0m ago