The pro-Russian, pro-Chinese and anti-immigration leader criticized journalists and opponents as he was sworn in for a second and final term. The 73-year-old Zeman may become even more outspoken as his career closes. 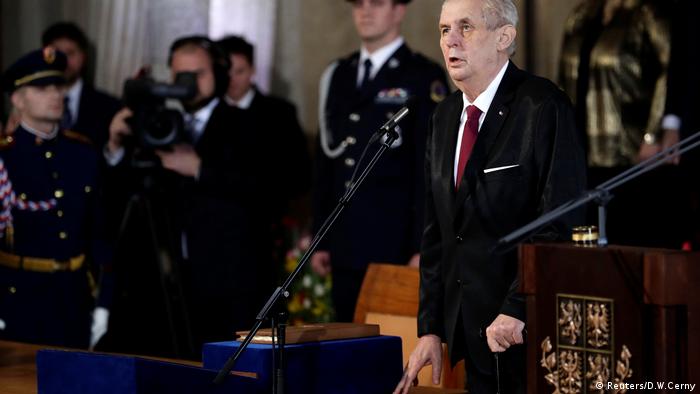 Czech President Milos Zeman was sworn in at a ceremony held in the Vladislav Hall of the medieval Prague Castle, which dates from the ninth century and claims to be the largest, ancient castle in the world. It has also been the presidential seat since 1918.

The 73-year-old took the presidential oath Thursday during a joint session of both houses of parliament at the castle.

In his address, Zeman took up where he had left off during the campaign with an attack on the Czech public broadcaster for giving too much coverage to the TOP 09 conservative party and more generally "manipulation" by liberal outlets. TOP 09 European parliamentarian Jiri Pospisil left in protest, writing later on Twitter, "It's sad that Milos Zeman can't stop himself from attacking those with different viewpoints."

Zeman also spoke out against the Hospodarske Noviny newspaper and Respect magazine.

Several other conservative lawmakers, including former-Foreign Minister Karel Schwarzenberg, left the room during the ceremony.

After serving as prime minister during the 1990s, Zeman was first elected to the mostly ceremonial post of head of state in 2013, following Vaclav Havel and Vaclav Klaus, who had served in the post before him.

He won re-election in January with a 51.5 percent share of the vote, during a campaign dominated by security issues and immigration. 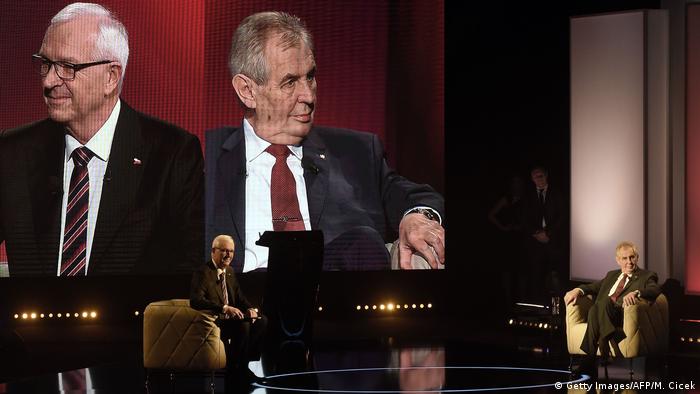 A Zeman billboard campaign declared, "Say no to immigrants and Drahos, this land is ours." Jiri Drahos was his main election rival, a former head of the Czech Academy of Sciences who was decried, often in vulgar language, as an out-of-touch liberal. He earned 48.6 percent of the vote.

Zeman has said he is in favor of an in-or-out referendum on EU membership, similar to the Brexit vote in the UK in 2016.

Support in the election for Zeman came mainly from smaller towns and rural areas. Kremlin Watch, a unit run by the Prague-based European Values think tank, described Zeman a "Kremlin trojan horse" and claimed dozens of Czech websites with a Putin-like ideology had been involved in smearing Drahos. However, they presented no proof of financial links between Moscow and the websites.

Zeman has spoken out against EU sanctions on Russia. He has also called for closer ties with China and was one of the few European leaders to endorse Donald Trump's bid for the US presidency in 2016. A force for forming a new government

Prime Minister Andrej Babis won parliamentary elections last October but his minority government lost a confidence vote in January. He is still struggling to form a new government but, as he supported Zeman in his election, is expected to be given more time to form a Cabinet. Zeman may be able to influence his former party, the Social Democrats, to come to terms with Babis' ANO party.

If the second round of coalition talks fails, the constitution allows for a third attempt.

Commentators have suggested that Zeman may become even more outspoken, and move further to the right, during his final term.

Zeman’s first foreign visit will be to Slovakia at the beginning of April, followed by Poland, Germany, Austria, Hungary and Israel, according to his office.

He is prevented from standing for a third term by the constitution and his current tenure will end on March 8, 2023.

Prime Minister Andrej Babis, the country's second richest man, is mired in opposition over corruption concerns. His ANO party will remain in power, but his own future remains uncertain. (16.01.2018)