Muslim and Jewish leaders stand together in solidarity at Auschwitz | Germany | News and in-depth reporting from Berlin and beyond | DW | 24.01.2020 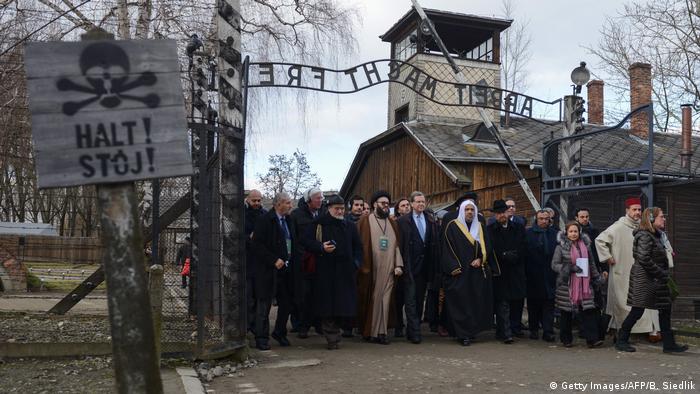 A convoy rolled into the former Auschwitz death camp some 30 minutes later than expected, just days prior to the 75th anniversary of the camp's liberation.

But a half-hour delay is insignificant when considering that it took nearly 20 years to get to this moment, when some of the world's most prominent Muslim leaders converged on the site where over 1 million people, mostly Jews, were murdered in one of history's most notorious industrial genocides.

Prominent representatives of the Muslim faith from over 20 nations, however, were not alone in their pilgrimage to the camp. They walked through Auschwitz's infamous gate — with its haunting slogan "Arbeit macht frei," or "Work sets you free" — shoulder to shoulder with the entire leadership of the American Jewish Committee (AJC), an organization that's had this meeting of spiritual leaders at the top of its agenda for the past two decades. 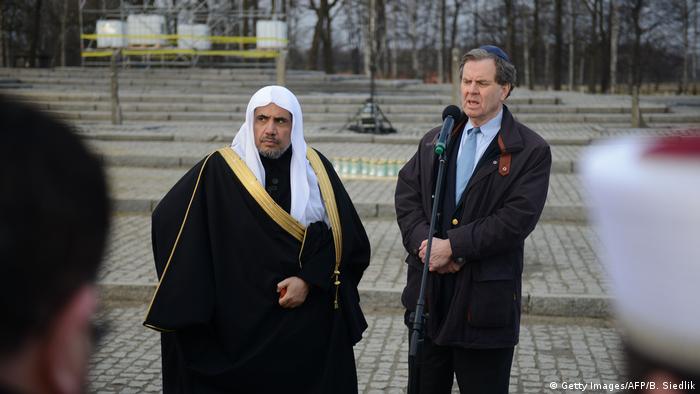 Official delegation visits to the Auschwitz memorial site often follow the same routine: Guides provide barely audible commentary through headphones as visitors pass through harrowing sites, like the "Wall of Death," where German soldiers shot thousands of Polish prisoners. Photo-ops are normally scattered throughout the tour, before groups move on to Birkenau to learn of more horrors.

Today's tour took a very different path. Daniel Pincus, a 41-year-old New Yorker, led the group through rooms filled with piles of victims' hair, shoes, combs and luggage, all the while explaining his family's history. The Nazis murdered his Berlin grandparents and other relatives, tragedies that continue to haunt his family to this day.

Al Issa laid his hand on the back of Pincus' neck before leaving the building, holding him tightly and thanking him for his participation in the tour. Nearly two dozen other Muslim representatives, from Indonesia and the US, the Balkans, Scandinavia and the Arab world, followed suit.

The group spent over a half-hour in an exhibit titled "Proof of the Crimes," though two Muslim representatives could only stomach a few minutes in the space: "It's so horrible," one proclaimed.

The delegation later walked through the grounds of Birkenau, which today has morphed into a construction site. Preparations for the Jan. 27 anniversary of the camp's liberation are already underway. More than 250 survivors and official guests are expected to attend.

But the group of global religious leaders was unperturbed by the massive tent, dozens of lampposts, loudspeakers and portable toilets that now adorn the ground. They instead took in the tracks leading into the camp and the ramps to bombed-out gas chambers that once led the suffering to their deaths. 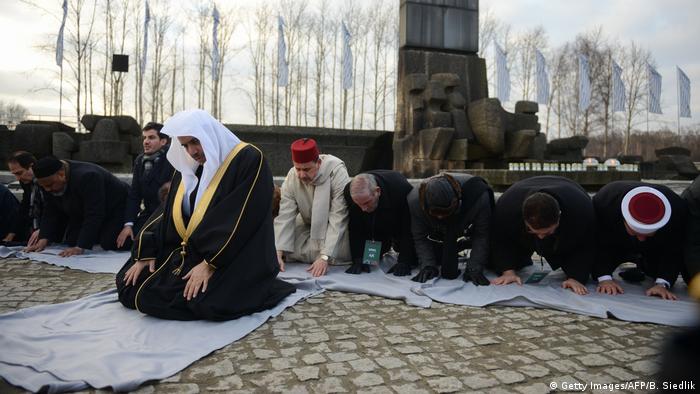 Readings from the Torah and Koran

Ari Gordon, responsible for Jewish-Muslim dialogue at AJC, gave the opening remarks. He, like most of the US delegation, is a descendant of Holocaust survivors. Switching between English, Hebrew and Arabic, Gordon read quotes from both the Torah and the Koran, speaking of suffering and hope, while two delegates remembered their murdered relatives.

Participants then lit candles and placed them at the base of the memorial site before leading one another in prayers. Rabbi David Rosen recited Psalm 23 and sang the Kaddish, a sanctification of God's name. Various attendants laid prayer mats on the cold ground of the memorial for Muslim attendees, who oriented themselves toward Mecca and fell to their knees in quiet prayer.

Jewish representatives were moved to tears at the display. "We knew what was coming, but we still weren't prepared," one person said afterwards.

Polish employees of the Auschwitz memorial conceded they had never seen such a scene in their years working there. 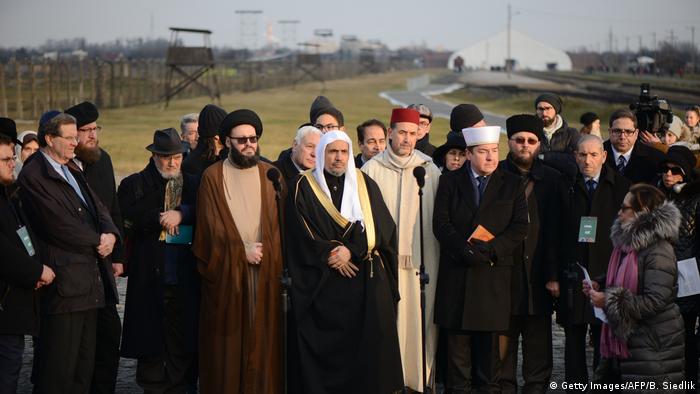 In remarks shortly following the service, the Al Issa put words to what the diverse delegation was feeling at the moment.

"I can say in the name of all Muslim visitors: We are deeply affected by that which we've seen, by this terrible crime, this crime against humanity," he said. "It is the great responsibility of the global community to ensure that this never happens again."

Calls of "never again!" rang throughout the speech multiple times. "The world, all people together, must strive toward peace and fight against evil," he said. "We ask God to help us achieve peace. Peace is such a big word." AJC Director Harris spoke of an "historic day" in his remarks, flipping typical questions of God's absence in the Holocaust on its head.

"Where was humanity?" he asked. "Auschwitz was a betrayal of God. Many of the German perpetrators were academics, learned people, engineers. They had learned everything, but they never learned humanity."

He later stressed the importance of free will. "We made our choice," he said, referring to himself and Al Issa.

"Our choice is salaam, shalom — peace, cohabitation, friendship and mutual understanding," he said. "What better place than here to say this, than next to the gas chambers of Auschwitz?" Harris asked, before quoting a tiding of peace from the Prophet Isaiah.

With the short delay at the day's outset long forgotten, delegates stayed a full two hours longer than originally planned, before continuing their long journey together to the Polish capital, where mutual visits to a mosque and a synagogue were planned.