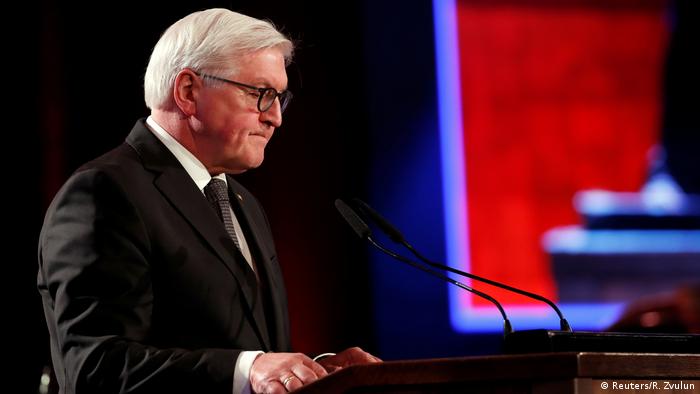 "I wish I could say that we Germans have learned from our history once and for all, but I cannot say that when hatred is spreading," Steinmeier said at the start of the World Holocaust Forum (WHF).

Steinmeier, who is the first German president ever to give a speech at Yad Vashem, was joined by other heads of state for the start of the WHF to commemorate the 75th anniversary of the liberation of Auschwitz.

"I stand before you and wish I could say that our remembrance has made us immune to evil," he noted.

"Yes, we Germans remember," he said. "But sometimes it seems as if we understand the past better than the present."

Evils of anti-Semitism 'appear today in a new guise'

The commemorations in Jerusalem come amid a rise in anti-Semitism in Europe and the United States, with Steinmeier warning that although the Nazi regime is gone, "the same evil" still remains in society.

"The evil spirits appear today in a new guise, presenting their anti-Semitic, their nationalistic, their authoritarian thinking as an answer for the future — as a new solution for the problems of our time," the German president said.

He described stories of Jewish children in Germany who are "spit on in the schoolyard." He also condemned the anti-Semitic attack on a synagogue in the eastern German city of Halle last October where only a heavy wooden door prevented a right-wing extremist "from carrying out a bloodbath ... on Yom Kippur."

"Germany's historical responsibility will not expire," he emphasized. "We want to live up to it — and you should judge us on it."

World leaders in Jerusalem for commemorations

Over 50 heads of state and government are in Jerusalem for the WHF, including Russian President Vladimir Putin, French President Emmanuel Macron and US Vice President Mike Pence.

Around 100 Holocaust survivors are also taking part in the event, which includes prayers for the dead and the lighting of a memorial torch.

It is the largest gathering in Israeli history of world leaders commemorating of the Holocaust. The forum on Thursday is the first of several events leading up to the 75th anniversary of the liberation of the Auschwitz concentration camp. Red Army soldiers liberated the camp on January 27, 1945.

An estimated 1 million people were murdered at Auschwitz before it was liberated. Over 6 million Jews — more than a third of the world's Jewish population at the time — were killed by the Nazis in gas chambers, ghettos and forced labor camps.

During her Israel visit, Bundestag President Bärbel Bas has voiced her "deep grief and shame" at Germany's role in the Holocaust. And she warned that rising antisemitism in her country needed to be urgently combated.