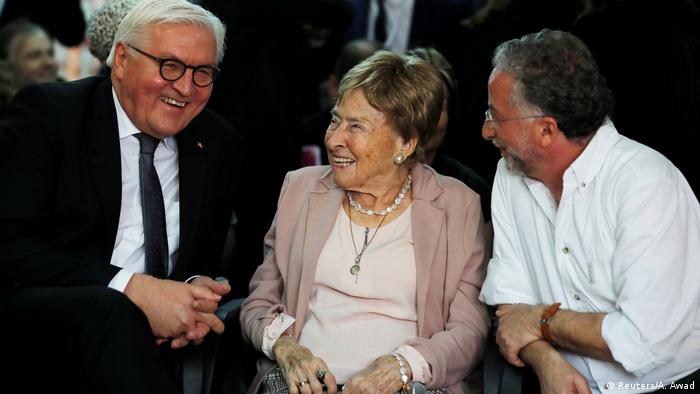 German President Frank-Walter Steinmeier, who arrived in Jerusalem ahead of a ceremony at Israel's Yad Vashem World Holocaust Remembrance Center scheduled for Thursday, met with two dozen Holocaust survivors at the Amcha Therapy Center, a psychological support center for Holocaust survivors and their families, on Wednesday.

Steinmeier sat with survivors, listening to harrowing stories that remain vivid to this day. He told those present that it was a, "privilege for a German president to hear about your lives and your survival."

One survivor, 92-year-old Giselle Cycowicz, recounted the horror of her internment at the Auschwitz concentration camp, saying, "I recall that horrible situation every morning." She told of being forced to walk to Auschwitz's labor camp barefoot through the snow, saying: "It was brutally, brutally cold. I can never get warm, not even today."

Another, 102-year-old Elias Feinsilber, told Steinmeier, "I look back upon a difficult life." But, he added, he sees his life in Israel, alongside more than 20 grand and great-grandchildren, "as my revenge on the Nazis."

While meeting with survivors, Steinmeier emphasized the importance of victims telling their stories, saying, "We need to speak of individual fates in order to convey our responsibility — a responsibility that will never end — to a new generation."

The statement was a clear rebuff of calls from far-right voices in Germany, including many from the party Alternative for Germany (AfD),who say it is time for the country to put its past behind it.

The faces of survivors

Steinmeier, who will be the first German president to ever address guests at Yad Vashem when the World Holocaust Forum opens on Thursday, also met with his Israeli counterpart, Reuven Rivlin, after his arrival in Jerusalem.

Steinmeier thanked Rivlin for the invitation to speak at the forum, which will take place under the motto "Remembering the Holocaust: Fighting Antisemitism," writing in the Israeli president's guestbook: "It is with gratitude and humility that I accept the hand extended to myself and my country as a sign of reconciliation."

Steinmeier underscored the urgency of the problem after meeting with victims, saying, "They also reminded us of our obligation to not look away from the horror of our past, but instead to heed our responsibility today and stand up against anti-Semitism."

Some 50 heads of state and government, including Russian President Vladimir Putin, French President Emmanuel Macron and US Vice-President Mike Pence, are expected to attend the opening of the forum Thursday, in what will be the largest such gathering of world leaders in Israeli history.

The World Holocaust Forum will be the first of a number of events leading up to the 75th anniversary of the liberation of the Auschwitz concentration camp by Soviet troops on January 27, 1945. Steinmeier will also participate in a memorial marking that date next Monday in Poland, where the camp was set up by occupying Nazi German forces.

It is estimated that more than 1 million people were murdered at Auschwitz before it was liberated. Of the 7,000 people Soviet troops found on that day, many died of hunger, illness and exhaustion shortly thereafter.