′I think it can happen again′ — Holocaust survivor meets Merkel ahead of Auschwitz liberation anniversary | Germany | News and in-depth reporting from Berlin and beyond | DW | 21.01.2020 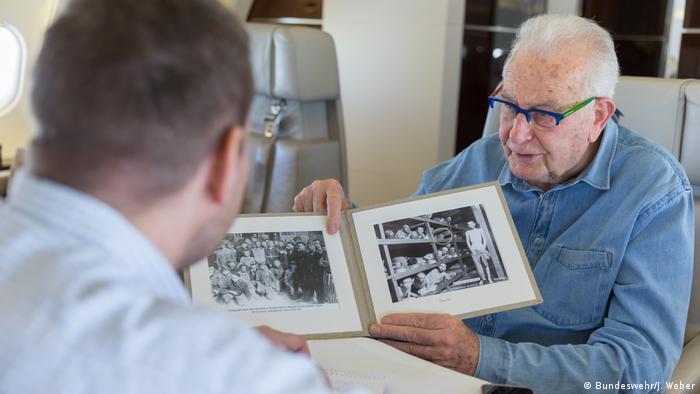 Naftali Fürst has been on the road for almost 10 hours. After climbing some 60 rusty metal steps the 88-year-old arrives at the exhibition space for the Zollverein Coal Mine Industrial Complex in Essen. Slowly, he walks through the exhibition. Finally, he stops. Stood in front of his massive portrait, he pulls an album from a bag. He never travels without this photo. Pictured is 12-year-old Fürst, not a boy, but a skeleton, closer to death than to life. Naftali Fürst, the Jewish child from Bratislava, in Buchenwald concentration camp, four days after its liberation.

It has been a long day for Fürst. Barely after 5:00 a.m., the taxi was already waiting outside his home in the northern Israeli city of Haifa. Before dawn, he met his daughter, son-in-law and two of his grandchildren at Tel Aviv airport. He won't be home tonight until around midnight. A great effort for an impressive exhibition. Currently on show at the Zollverein Coal Mine Industrial Complex  are the portraits of 75 Holocaust survivors. Elderly people, staged by star photographer Martin Schöller who manages to make their faces talk.

On the plane to Germany, Fürst begins talking to DW about the death march of 1945, in which the prisoners, weakened and sick, were forced to march from the east to Buchenwald concentration camp. The path was one that stretched over many days, through snow, past corpses. "Every step was excruciating. I remember asking a German guard if I could hold onto a horse-drawn cart to make it easier to make headway. But he forbade it. And now? Now I'm on a German plane, on my way to meet Chancellor Merkel." 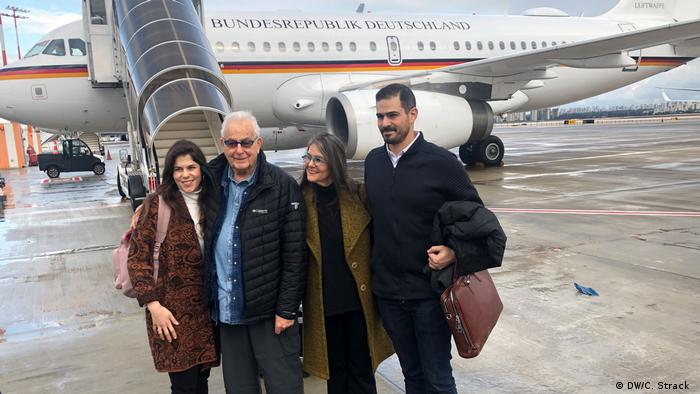 Naftali Fürst with his daughter and two grandchildren

With sleek white hair and alert eyes, this elderly and humorous gentleman is making his symbolic flight on an German Air Force plane. The photo of 12-year-old Fürst, taken in Buchenwald concentration camp in mid-April 1945, was only published in an Israeli newspaper decades later. Lying there, he is just one of the many skinny figures: the result of suffering, caused by humankind.

"We are not saved. Whoever was there is not saved," Fürst says 75 years later. The title of his book, "Like pieces of coal in the flames of terror — A family survives the Holocaust," draws the same analogy: like a burned piece of wood, marked for life. "My pain, my memory remains," he says.

When he speaks hours later, after Chancellor Angela Merkel, he recalls the memory of so many others, so many children. The Nazis deported 232,000 children to Auschwitz, only a few hundred survived.

At the opening of the exhibition, North Rhine-Westphalia State Premier Armin Laschet and the chancellor give speeches of the kind expected from politicians around memorial day: this time ahead of the 75th anniversary of the liberation of Auschwitz on January 27. Laschet speaks of the collapse of civilization during the Holocaust, describing the atrocities as bestial and inhumane. Merkel again repeats her feeling of "deep shame" which she spoke of, just seven weeks ago, during her first official visit to Auschwitz. 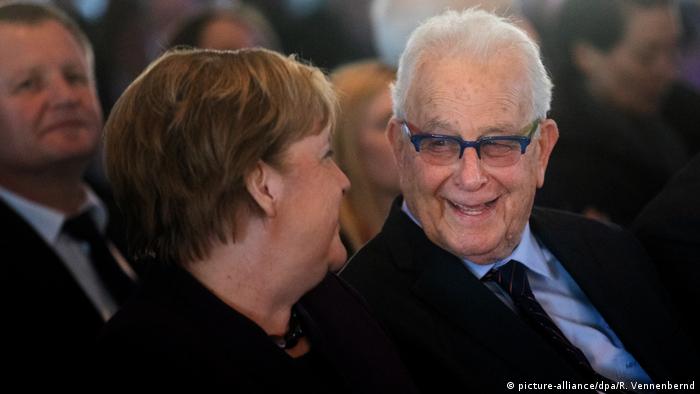 "But more touching are the biographies," says Kai Dieckmann, former editor-in-chief of German tabloid Bild and today chairman of the Friends of Yad Vashem in Germany. "This gift from elderly witnesses."

In a calm speech, almost in narrative, Fürst describes how the Holocaust nearly took his life, and in turn changed his future forever. It wasn't until 2005 that he spoke about the horrors he endured as a child. He never wanted to travel to Germany or speak German again. But today, he occasionally makes trips to Germany or Austria for lectures and commemorative events.

"I think it can happen again," he said earlier in the morning. "It wasn't a different planet. Humans did that." He says the situation is currently deteriorating again, and that's why he speaks as a witness. "I have a duty to tell […my story]." Because people shouldn't believe "that it didn't happen."

Soon after 4:00 p.m., after photos with the chancellor, the bus carrying Fürst and his family heads back to the airport — after a long day between the past and the future.