Angela Merkel used her speech at Auschwitz to condemn anti-Semitism. She visited the former Nazi death camp at a time when making a commitment to Jewish life in Germany is paramount, says DW editor-in-chief Ines Pohl. 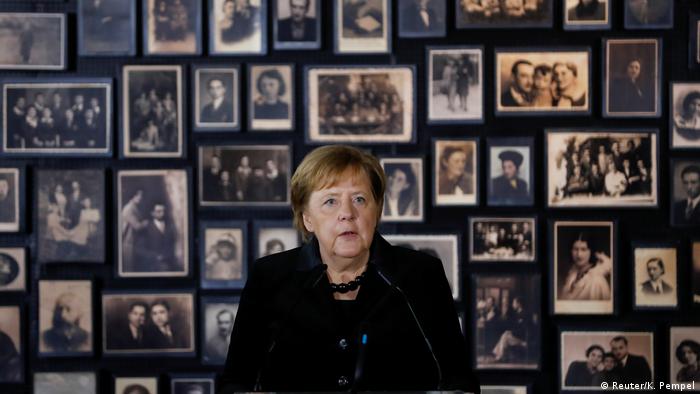 For several years now, calls have been getting louder for Germany to let the past become history and for the country finally to stop being preoccupied with the historical guilt the country has been saddled with by the Nazis.

At the same time, hate crimes against Jews have been on the rise. The two, of course, are closely linked. Two months ago, two people were killed in the eastern German city of Halle by a rightwing extremist who tried to storm into a synagogue filled with worshippers on Yom Kippur, the holiest day in the Jewish calendar. Ultimately, only luck kept the terrible attack from becoming a bloodbath. Jews in Germany once again must fear for their lives. That is the awful truth.

The fact that the chancellor’s first visit to the German death camp came in response to an invitation from the Auschwitz-Birkenau Foundation fits her pragmatic and sober personality. The foundation is dedicated to the maintenance of the memorial site. Therefore, Merkel's words at Auschwitz focused on remembrance and the fact that Germany's special responsibility for the crimes committed there can never end. The story must be repeated — "Auschwitz was a German death camp." That responsibility will always be a part of the German identity, and it will remain so forever.

Anyone who has ever been to Auschwitz will understand how difficult it must have been for a German chancellor to find adequate words while there. But Angela Merkel did. She did not remain silent, frozen by guilt. Rather, she used the lessons of the past to guide a course of action for our times.

It is not simply a matter of rhetoric when people warn of new crimes born of intolerance, she said. Crimes motivated by hate and racism are still experienced today. Anti-Semitism is also currently threatening the lives of Jews in Germany and Europe. Auschwitz obliges each of us to stand up for and protect the dignity of others. "We must never forget. The slate can never be wiped clean, nor can it be relativized."

Clear signs of solidarity with the Jewish community and the cautionary historical lessons of Nazi Germany's crimes have been cornerstones of Merkel's 14 years as chancellor. She has visited Israel's Yad Vashem — the World Holocaust Remembrance Center — five times. In 2009, she and US former-President Barack Obama visited the Buchenwald concentration camp, and in 2013 she traveled to the Dachau concentration camp with survivors. She returned to Dachau in 2015, on the 70th anniversary of its liberation.

Now, for the first time since becoming chancellor, she went to Auschwitz. The place that like no other symbolizes Nazi atrocities — the epitome of industrial-scale, mass murder. More than 1 million people were killed there.

It is, therefore, upsetting and shameful that I, as a German, have to say that it is more important than at any time since the founding of the republic that the chancellor should have gone there. Now, a time when anti-Semitism and nationalist sentiments have been revived in Germany's parliament and are once again becoming socially acceptable. At a time when Jews on German streets and in German synagogues once more have to fear for their lives.

Author Salman Rushdie on ventilator after stabbing 0m ago

Opinion: World Cup 2022 — No anticipation, only chaos in Qatar 19h ago