Popular German musicians took to the stage in Halle for a concert dedicated to the victims of the recent far-right attack. A heavily armed man killed two people after trying and failing to enter the local synagogue. 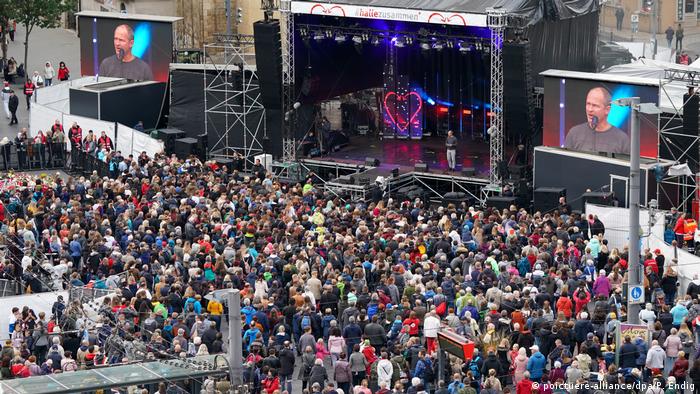 Some 5,000 people gathered for a memorial concert in Halle on Saturday, 10 days after a far-right extremist killed two people and injured two more in a shooting rampage.

The landmark Red Tower in the northeast German city chimed at the start of the event, held under the slogan "HalleZusammen" (Halle Together). Event organizers, which include the city government and several media companies, say the concert was aimed to send a "strong message against anti-Semitism, xenophobia, and right-wing extremism."

Ten days ago, a heavily armed man attempted to attack the local synagogue on Yom Kippur, the holiest day in the Jewish calendar, but failed to gain entry to the building as the door was locked during the service. He then apparently randomly killed two people, a 40-year-old woman who was walking past and a 20-year-old in a kebab shop.

The attacker also shot a married couple when the husband refused to give him the keys to a car in his parents' driveway, but the two survived. Police managed to capture the alleged assailant soon after the attack. Identified as Stephan B., the suspected attacker confessed to the crime and "confirmed far-right and anti-Semitic motives" for the shooting, authorities said. He remains in custody.

The attack once again prompted the discussion on far-right violence and dangers still faced by Jews in Germany. Mainstream German politicians blamed the leaders of the right-wing populist AfD (Alternative for Germany) party for inciting extremists with their inflammatory rhetoric.