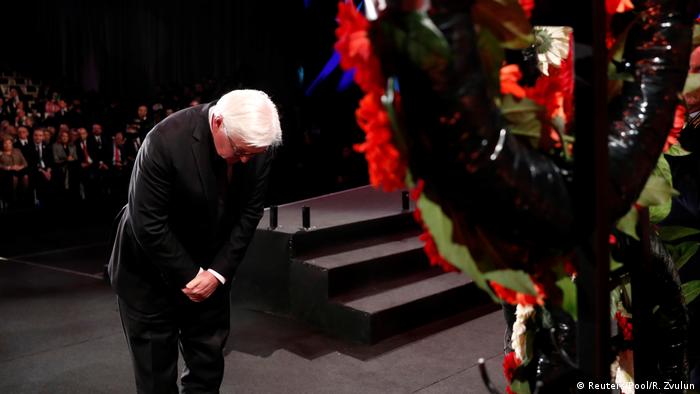 "What grace, what a gift it is that I may speak to you today at Yad Vashem," said Frank-Walter Steinmeier as he addressed those gathered at the World Holocaust Forum. Indeed, it is anything but self-evident that the president of the German Federal Republic should be allowed to speak at Israel's central Holocaust remembrance site — he, the highest representative from the country of the perpetrators; a man whose forefathers' generation systematically murdered 6 million Jews before the Second World War ended in 1945.

Seventy-five years after the liberation of Auschwitz, Steinmeier expressed thanks for the "outreached hand of survivors." He spoke of the "new trust" that Germany has been afforded by Israelis and other people around the world, calling it a "miracle of reconciliation" — humble words that must never sound routine or compulsory. Steinmeier also drew a clear link between the timeless guilt of Auschwitz and the shame of our day — the growing and increasingly public anti-Semitism now found in Germany — a hatred that is not new.

The shame of Halle

The president could also have pointed to the anti-Semitism seen in other countries, but he didn't — and that is a good thing. It could have easily been misunderstood as a relativizing gesture.

Thus, Steinmeier was right to take responsibility and clearly call out the "evil spirits" of the daily anti-Semitism found at home in Germany. He specifically addressed the failed attempt by a right-wing terrorist to carry out a bloodbath at a synagogue in Halle on the high holy day of Yom Kippur last October. Once again, the German president found the right words: "These are not the same perpetrators. But it is the same evil."

The Yad Vashem World Holocaust Remembrance Center was undoubtedly a suitable and worthy site for Steinmeier's shame. And he will have the opportunity to express his thoughts and feelings again next Monday at a site that is more authentic still, at the scene of unspeakable crimes, when he commemorates the liberation of the Auschwitz concentration camp by the Soviet Red Army.

Polish President Andrzej Duda will be present on Monday as well. He elected not to travel to Yad Vashem because he was not asked to speak, unlike Steinmeier and others, such as Russian President Vladimir Putin. Duda's anger is as understandable as it is unfortunate. For at Auschwitz, the death camp erected by Nazi Germany in occupied Poland, hundreds of thousands of Poles, many of whom were Jews, were also murdered. For that reason alone, it would have been right and important to allow Duda to speak at Yad Vashem.

The discord over the attempt to create a fitting Auschwitz commemoration illustrates — in almost tragic fashion — how the shadow of history still darkens the present. Unfortunately, even the remarkable and historic words spoken by the German president cannot change that fact.

US: Joe Biden to visit Florida after 'deadly' Hurricane Ian 6h ago