The German company that enabled the Holocaust | Germany | News and in-depth reporting from Berlin and beyond | DW | 23.01.2020 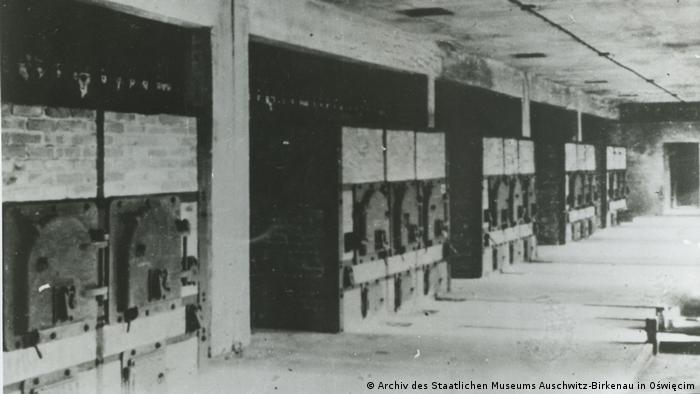 Auschwitz-Birkenau, Buchenwald, Dachau, Mauthausen: When Allied liberating forces arrived in Nazi concentration camps at the end of the Second World War they discovered piles of dead bodies and crematoria bearing the logo of J.A. Topf & Sons.

The infamous German company, based in the eastern city of Erfurt, had collaborated with the Nazis, designing, building and delivering equipment for the mass incineration of prisoners — a ghastly invention that made the Holocaust possible.

Success under the Nazis

The company, founded by Johannes Andreas Topf in 1878, initially specialized in constructing brewery equipment and exported its wares around the globe. Then, after the First World War, the owners discovered another business opportunity – building ovens for city crematoria. During the Weimar Republic Topf & Sons became a market leader in oven manufacturing known for its "optimal implementation of the commandments of piety."

The company's business continued to flourish after Adolf Hitler came to power. From July 1937 onward, both the company's bosses, Ludwig Topf and his brother Ernst Wolfgang – who had since joined the Nazi party – could see the Buchenwald concentration camp from their office windows.

The SS orders its first ovens

Buchenwald would soon become the first camp to use the company's ovens, as the growing number of dead in the camp — through torture or starvation — posed a serious logistical problem for the SS troops operating it. This problem was compounded after Germany invaded Poland on September 1, 1939. At that point, the camp was faced with an enormous influx of prisoners, and masses of those prisoners were dying. 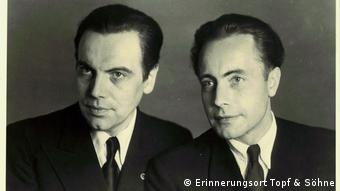 Before the war had even begun, SS officers had already looked into the idea of erecting large crematoria on site. In May 1939, Kurt Prüfer, Topf & Sons' chief engineer, presented his first design for a "mobile, oil-fired Topf & Sons cremation oven."

"The incinerator marked a radical departure from the culture and the rules of cremation. Human beings were burnt in them like refuse," writes Annegret Schüle, curator of the memorial site on the grounds of the former factory.

Prüfer was encouraged by the initial success of his design, and soon presented the Nazis with a new oven featuring two incineration chambers. That model was eventually installed in the Dachau concentration camp in November 1939. Thereafter, the ambitious engineer designed his first stationary crematorium. The company was so proud of its work that it applied for a patent on the design.

"Prüfer's attitude, exemplified by personal initiative with no moral qualms, was emblematic of the stance of those in the technical department," says Rüdiger Bender, chairman of the Society for the Promotion of the Topf & Sons Place of Remembrance. Bender emphasizes, however, that leading engineers at the company were not staunch Nazis.

"The company was never forced to build the ovens, quite the opposite in fact. Rather, it did its best to beat out competition from other companies, like Heinrich Kori in Berlin, which was also vying for the contract," says Annegret Schüle. She says engineers at Topf & Sons took the initiative and designed increasingly powerful ovens. The company was happy to oblige the regime, and a correspondence with the SS written on company letterhead documents as much, it reads: "Always a pleasure to do business with you." 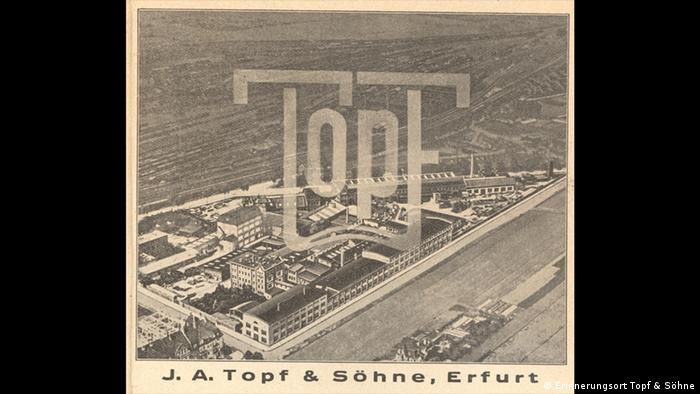 The Topf & Sons headquarters in Erfurt, pictured in 1935

When Nazi leaders decided to make Auschwitz-Birkenau a central hub in the Holocaust, the oven manufacturer's complicity reached new heights. "When SS administrators at Auschwitz discovered they could kill thousands of people in minutes using Cyclone B (hydrogen cyanide), they were faced with the problem of disappearing the bodies," says Schüle. The answer was provided by Top & Sons' ovens.

On August 19, 1942, Prüfer met with SS construction managers. During the meeting it was decided that three massive crematoria would be needed on the site. Two more would later be added. By the summer of 1942, the Nazis were incinerating up to 9,000 bodies a day.

But Prüfer's success was a thorn in the side of his colleagues, and in September 1942, his boss, Fritz Sander, presented a new invention of his own: The multi-muffle oven. This new oven was designed to allow the uninterrupted cremation of bodies in a "production-line" system.

Technicians from Erfurt, including fitter Heinrich Messing, were soon dispatched to Auschwitz to begin construction of the new design. They spent long periods of time at the camp and were well aware of the genocide taking place there.

Interestingly, Messing was a communist and a member of the Communist Party of Germany, or KPD. Still, his own beliefs did not keep him from conscientiously completing the job at Auschwitz ahead of schedule. "Theoretically, he could have sabotaged the project, or at least delayed completion. But he didn't," says Rüdiger Bender. 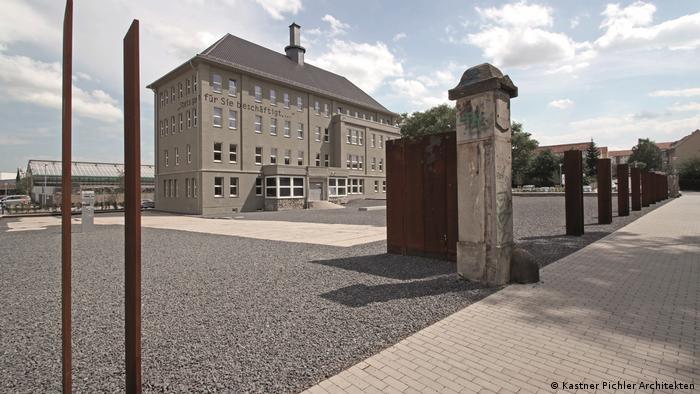 Today, the site of the former Topf & Sons headquarters has been turned into a memorial

Annegret Schüle writes, "In the early 1940s, technology designed for the incineration of human beings and the disposal of bodies only accounted for about 2% of J.A. Topf & Sons' annual profits." Still, she says, the company is a "textbook example of how companies were complicit in the Holocaust."

One boss commits suicide, the other flees

When Nazi Germany was defeated in May 1945, Ludwig Topf committed suicide by swallowing a cyanide capsule after he was informed of his pending arrest by US military officers. In a suicide note, he defiantly declared his innocence, writing: "… if the people want blood, I'll do it myself. I was always forthright — the opposite of a Nazi — everyone knows it."

His brother Ernst Wolfgang fled to the Western occupation zone, where he rebuilt the company, and investigations into his wartime activities were eventually closed. It wasn't until the publication of the book "Macht ohne Moral" (Power without Morals), written by concentration camp survivor Reimund Schnabel, that the West German public was reminded of the company's earlier activities. After that, Topf was no longer extended credit and the company soon went bankrupt.

Topf & Sons' Nazi past was all but forgotten in East Germany after it was nationalized and its name changed to VEB Erfurt Malting and Storage Company, eventually going bankrupt in 1994. It was not until the fall of the Berlin Wall and an attempt by a Topf heir to gain restitution that the public became aware of the company's dark past.

That was when Hartmut Topf, a great-grandson of company founder J.A. Topf, got involved. The journalist decided to make it his life's work to research the company's history and preserve it for coming generations. "After the Wall fell, I saw a newspaper article about a West German woman seeking restitution from the city of Erfurt," says the 85-year-old. 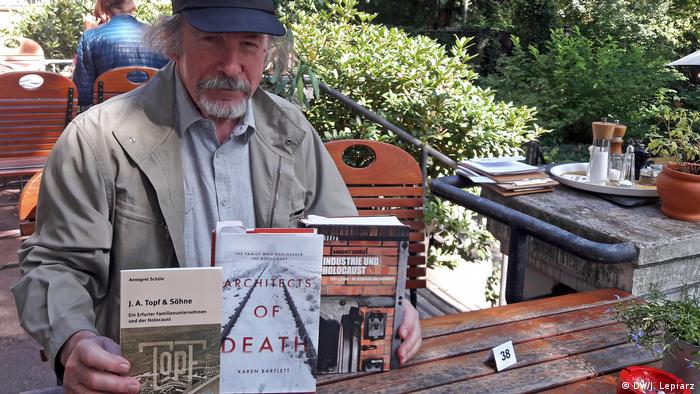 Hartmut Topf has kept the memory of the company's history alive

"That set off alarm bells for me. I thought – wait a minute – if there is any money at all, it should be given to civic education programs or to victim compensation funds," he says.

Initially, politicians in Erfurt were less than enthusiastic about his plan to open a memorial site on the grounds of the former factory. But in the end, Topf and his associates won out, and a place of remembrance was opened on the site of the company's former administrative offices in 2011. There, a permanent exhibition illustrates the company's history.

Topf also faced prejudice when in Poland. Two years ago, when he mentioned his name at the Memorial and Museum Auschwitz-Birkenau, the elderly greeter at the entrance became irritated. "Your name does not have a very good reputation here," said the man. To which Topf replied, "I know, that's why I am here."

From the "Guilt without atonement" series, a project of DW's Polish department, the Interia portal and the Wirtualna Polska media group.