The Nazi archives: Where Germany′s dark past is stored on paper | Germany | News and in-depth reporting from Berlin and beyond | DW | 07.09.2019

In April, the Arolsen Archives made more than 13 million documents on victims of the Nazi regime available online. DW's Emmanuelle Chaze went on a personal journey to find out more about her relatives in World War II.

Bad Arolsen in a small town tucked away in the bucolic state of Hessen, near the city of Kassel. It is roughly five hours away from Berlin by train. It is a picturesque and quiet locale, and perhaps unexpectedly, home to Germany's memory in the form of the Arolsen Archives — the International Center on Nazi Persecution.

A few weeks ago, ahead of the 80th anniversary of the beginning of World War II, I filmed a report at the Arolsen Archives, which is home to more than 50 million documents tracing the fate of around 17 million victims of the Nazi regime. Little did I know what was awaiting me when I headed to the archives that day, but, after meeting a man who had come to collect his father's personal effects, I decided to look further into my own family history in hopes of finding out more.

Jean-Paul Garcia, a Frenchman in his 60s, came all the way from a town near Bordeaux in his caravan to be handed back some personal effects that had belonged to his father, Antonio Garcia, a war prisoner. The elder Garcia had fled Franco's Spain to support the French Resistance, and was arrested by the Nazis in 1944 and sent to a forced labor camp.

At the end of the war, some 5,000 objects were provisionally placed under the watch of the International Red Cross first, and the Arolsen Archives afterwards. Watches, jewelry, coupons, letters and photos coming from concentration or transfer camps, mostly Neuengamme and Dachau. The archival center does not legally own them; it safeguards them in the hope of returning them back to their lawful owners.

Today, some 3,000 personal possessions belonging to former inmates remain at Arolsen, and an investigation team works tirelessly to contact the relatives of the victims to whom they belonged. The "Stolen Memory" campaign was launched in 2016 to redouble efforts at restituting the personal effects. With the help of volunteers, hundreds of victims' families could be located. One such case was Jean-Paul Garcia, whose visit to the archives was very emotional — for him and his wife, and for the team who managed to trace him back and hand back his father's long-lost possessions: a watch, a ration coupon, and a ring.

While the Nazis tried their utmost towards the end of World War II to erase all physical trace of their crimes, they were overwhelmed by what Germany does perhaps better than any other nation: bureaucracy. They simply couldn't get rid of all the written evidence of their crimes. In a former warehouse, waiting for a permanent, safer building, shelves after shelves of grey files and yellowed index cards are the proof of these crimes committed by Hitler's followers from his accession to power until the fall of the Third Reich.

So after filming in that grey, solemn place, and buoyed by the emotion of Jean-Paul Garcia's encounter, I enquired whether I could check if there were any trace of my great-great uncles, whom I vaguely knew had been forced laborers during the war. I should say that I come from Alsace, a region which for a long time switched between French and German rule — and whose history is thus particularly complex when it comes to WWII. Most families have a painful past; be it because they were exiled, sent to forced labor, or collaborated with the Nazis.

And yet in my own family, though nothing had ever been said one way or another, I had been afraid to dig too deep for fear of finding out something ugly about my relatives. But the archivist at Arolsen was very keen to help me out. She searched my relatives' last name, a peculiar name beginning with B, with only a handful of occurrences in France.

Not even a minute later, she looked up from her screen: the Arolsen Archives have digitized more than 13 million documents that are now easily searchable through their website. All you need is to type in a name or a topic. "There they are..." she said with a smile. She then checked among the hundreds of drawers holding the yellow index cards, and took out a little stack from the letter "B." 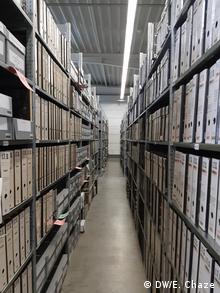 For her, it's everyday work, and in a way, this is not new to me: I spent years reading 17th and 18th century private correspondences before I turned to journalism. But this time is different: I know that her browsing through the cards also means she might unlock a door towards my past. And a moment later, she does: "Look — Ludwig, Anton, Pantaleon, Xaver...they are all here!" I know them, except that that is the Germanized version of their names: Louis, Antoine, Pantaleon, and Xavier. While doing genealogical research a few years ago, I had found out that they had been sent to Germany, while never knowing why. The archivist had the answer: "We do have records! Wait a moment."

I followed her through the warehouse and she opened a thick file with copied records of trial minutes. Louis B., along with a few friends, was tried on charges of being communist and having distributed flyers. This earned him six years in prison, starting on April 15, 1943.

His brothers, whose trial minutes I didn't find, were arrested the following November and condemned to various sentences for having participated to activities amounting to high treason — namely, listening to the London radio. The three of them were imprisoned in Bruchsal in the state of Baden-Württemberg.

I took pictures of all those documents, and was already thinking about telling my family all about what I had found, when the archivist surprised me further. She said that there were many other occurrences of the unusual surname in the cards, all hailing from Poland, and that some of those individuals settled in Berlin before being deported back to Poland. Could it then be that Berlin, the city I moved to nearly a decade ago, had also been home to some distant relatives who were killed by the Nazis?

When heading to the archives that day, I had no idea I would find clues to my own family's past. But in that short visit I learned more than I ever had before — and discovered that even 80 years on, the Nazis' paper trail meant there was still much more to explore.

Just months before the outbreak of the Second World War, 10,000 mostly Jewish children were granted refuge in England. Eighty years later, survivors are retracing a painful journey that is still relevant today. (09.07.2019)