Shoes, a comb and buttons of mostly female Polish and Russian captives massacred by Nazi troops have been excavated in central Germany. Forensic teams have identified only 14 of the 208 people murdered there in 1945. 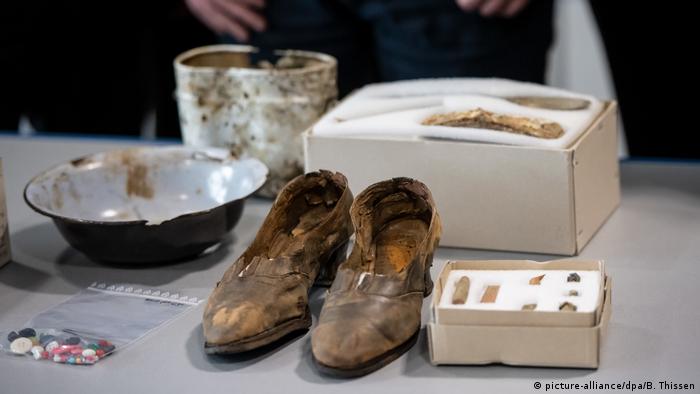 An informant's anonymous tip in late 1946 led to a third site, where bodies had been concealed under a cow paddock.

"These murders are part of our history that we must own up to," said Löb, adding that the project also sought to thwart current far-right downplaying of Germany's Nazi past.

LWL archeologist Manuel Zeiler said the team's "interdisciplinary and systematic" approach had been "unique" among the probes of Nazi-era crime sites in Germany – seven decades after World War II.

Many of the 400 artifacts were found in forest soils in Langenbach Valley near the town of Warstein, said LWL historian Marcus Weidner, adding that the items uncovered included shoes, colored buttons, pearls, a prayer book and lexicon in Polish, cutlery and textile fragments.

Reconstructing events at that site, the LWL said 71 victims — comprising 60 women, a child and 10 men — were apparently told to leave their meager possessions on the edge of a forestry road before being shot dead at a stream escarpment.

Money stolen from them ended up in the division's cash box.

Projectiles were found spread throughout the surrounding forest. The murderers left behind spades, said the LWL. 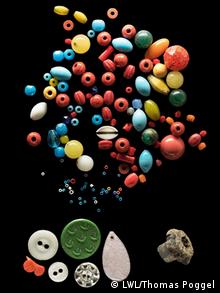 Buttons and beads were uncovered at the massacre site

At a second site, at Suttrop near Warstein, laborers were forced to dig trenches laid out as a zigzag, in which 57 people were then shot dead by Nazi troops, said to comprise Waffen-SS and Wehrmacht soldiers.

The Americans later ordered exhumations, summoned the local population and filmed the atrocity's aftermath. Records from the-then US 95th Infantry Division about Warstein are held in the USA's Eisenhower Archive.

"A short while ago I took a phone call from an elderly woman who was involved in the operation," Weidner told regional WDR public broadcaster.

"And, in the literature there are many accounts by persons who still remember the scenes, the smells, that are strongly etched in their minds."

The third site re-examined from last year into January 2019 had turned up a harmonica, a spectacle case and a comb, said the LWL, as well as Soviet coins and a spoon.

At that site, Eversberg near the town of Meschede, Nazi troops had detonated mortars to make a cavity, in which they shot 80 people and then concealed the victims under the paddock.

The tip given to British military sector forces in November 1946 led to those remains being exhumed in 1947 and being placed alongside other remains at Meschede's Fulmecke Cemetery, which is soon to be renovated.

Weidner said only 14 of the 208 victims had been identified, thanks in part to research conducted abroad.

The latest work offered the chance to link victims to potential descendants and overcome past reticence in finding out "who was shot dead here," Weidner told WDR.

More than 13 million people were conscripted by Hitler's regime as forced laborers, many to work as slaves as part of the Nazi arms buildup.

The LWL is a regional conglomerate that runs schools, clinics and museums servicing nine cities and 18 counties on the eastern fringe of North Rhine-Westphalia state.

President Joachim Gauck has visited Babyn Yar, a 1941 Nazi massacre site in Ukraine, saying generations later Germany will continue owning up to its past. More than 33,000 Jews were murdered in a ravine outside Kyiv. (29.09.2016)

The 'scream of Oradour' is still heard today

It was meant to be a historic event and became a deeply moving day: German President Gauck and French President Hollande held each other in a long embrace in Oradour, site of a massacre perpetrated by the Nazis in 1944. (05.09.2013)

Henri Nannen was a prominent figure in German journalism after 1945, but now his personal, political and journalistic connections to the Nazi era are under investigation.

Builders made a grim discovery as they worked at a prison site in the German state of Saxony. While digging, they found the bones of several people thought to have been executed by the Nazis.