Anti-Semitism: Israelis want action, not words | World | Breaking news and perspectives from around the globe | DW | 23.01.2020

Around 200,000 Holocaust survivors are still alive in Israel today. On Thursday, some of them took center stage at the Yad Vashem Holocaust Remembrance Center in Jerusalem alongside the likes of German President Frank-Walter Steinmeier, French President Emmanuel Macron, Russian President Vladimir Putin and Prince Charles.

They came to the World Holocaust Forum to commemorate the 75th anniversary of the liberation of the Nazi extermination camp at Auschwitz-Birkenau.

Those who could, walked around the hallways of Yad Vashem, talking to anyone who was willing to hear their stories — and people listened intensely, with great interest mixed with sorrow.

"I've heard the criticism, but I still think this gathering here is extremely important," says 81-year-old Holocaust survivor Yona Amit, who brought her 22-year-old granddaughter Maor Ratzon with her, despite the cold temperatures and scattered showers.

"The message should be that of human kindness," she told DW. "Ordinary people who did extraordinary things were the ones who saved us, who saved me. Such people still exist. And we should stand up in the face of evil today, just like they did back then." 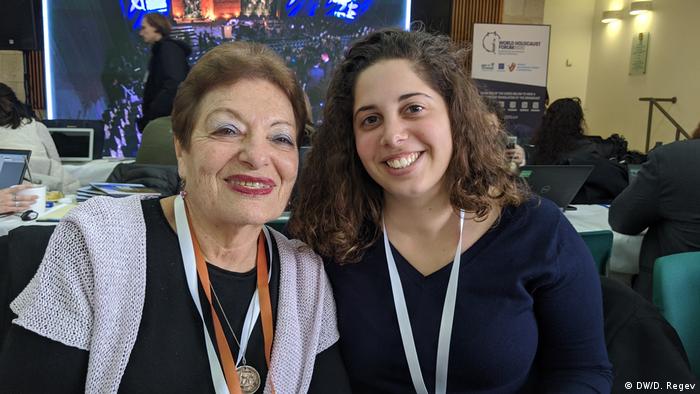 'Talk about the real issue!'

Amit isn't wrong to notice the criticism. Merely a few hours ahead of the ceremony, a couple of protesters gathered at the entrance to Yad Vashem, wearing yellow star badges and protesting what they called "a cynical and political use" of the memory of the Holocaust.

Instead of talking politics, 87-year-old survivor Haim Roth had hoped that the real issue would be finding concrete ways to combat rising anti-Semitism.

"The lesson we should learn is that the Holocaust must never happen again, but instead there are only empty words and hollow statements," he told Israeli radio ahead of the ceremony.

"Nobody talks about the real issue: How to fight racism and hatred around the world, and not only against Jews."

Politics instead of solutions

Indeed, the event was overshadowed by current political feuds — primarily between Russia and Poland — over their respective roles in World War II.

Leaders from both countries were supposed to attend the event, but Polish President Andrzej Duda boycotted it after his request to make a speech was denied. Lithuania also stayed away in a show of solidarity with Poland.

"The truth about the Holocaust must not die. It must not be distorted or used for any purpose," Duda said in a statement. "As for the facts regarding the beginning of the war, I'm sorry to say this, but President Putin is consciously spreading historical lies," he told Israel's public broadcaster Kann in an exclusive interview.

Israelis, however, seemed to be more interested in the fate of Naama Issachar. The 26-year-old is imprisoned in Russia after 9.5 grams of cannabis were found in her bag during a layover in Moscow from India. Israelis were hoping that Putin would pardon her, and some even speculated that he might bring her home with him on the plane.

Nevertheless, many locals are proud that their city is hosting an event of such magnitude. "It's a big privilege for Jerusalem," said Meirav, who together with her husband Haim manages a successful hair salon in the city center.

"Having such respectful diplomats in Israel in general and Jerusalem in particular is a badge of honor for us," the couple told DW.

"It's an opportunity to host representatives from across the globe that would later promote the memory of the Holocaust in their home countries, and this should not be taken for granted."

‘Not standing idly by'

Back on the foggy hill of Mount Herzl, where Yad Vashem is located, Ratzon is looking at her grandmother Amit with admiration. "She's an amazing woman, a role model for me," she shares. "She's a teacher, she's a volunteer, she dedicates her life to education," says the young woman, who's hoping to start working soon with at-risk youth.

"But on top of everything, her story is that of humanity, of people who created small miracles by risking their lives and not standing idly by." If there's any message to come out of this event, she says, it is the message of an open heart: "Simply not to ignore wrongdoings when you see them. This could mean the world for somebody else. A whole life even."