The year 2019 marked three decades since a grassroots democracy movement toppled the Berlin Wall and the repressive East German regime that had built it.

But it also saw an avowed white supremacist kill two in the eastern German city of Halle after failing to gain entry into a synagogue to carry out a massacre on the Jewish holiday of Yom Kippur.

With such confounding social currents coursing through German society, President Frank-Walter Steinmeier called on Germans in his annual Christmas address to embrace heated debate, but to not succumb to the forces of racism and anti-Semitism that seek to undermine the democratic progress of the past three decades.

Witnessing the Fall of the Wall: Katrin Hattenhauer

"We need democracy – but right now democracy needs us!" he said from his official residence at Berlin's Bellevue Palace on Christmas Day. "It needs self-assured citizens who have confidence and drive, common sense and decency, and who show solidarity with others."

'It stands for us'

This year, he questioned how Germans in such "highly political times" can "learn to respect one another again in the face of so much friction."

"How can we ensure our debates become more constructive and not coarser in tone? How can we fashion greater cohesion from so many contrasts?" he asked. "Do we now have fewer things that unite us than divide us?"

Steinmeier evoked the attack in Halle in reflecting on the answer to such questions. A synagogue door made of iron and wood was all that prevented the heavily armed attacker from carrying out a massacre and livestreaming the bloodshed on social media. 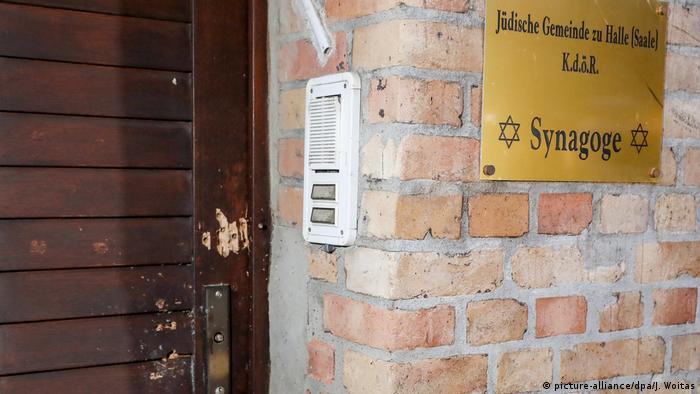 "This strong, battered door stands in my opinion for so much more. It stands for us." he said, referring to the German public. "Are we strong? Can we defend ourselves? Are we standing shoulder to shoulder? Do we stand up for each other?"

'You are the answer'

With anti-Semitism on the rise in Germany, it's those Germans who stand up to racism on the playground or in the pub, or who counter extremism on the internet with "respect and sound reason," who are the best answer to questions about the nation's values in 2019, Steinmeier said: "You are the answer. All of you."

Reflecting on the democratic strides since the fall of the Berlin Wall can bolster citizens' resolve against the forces that seek to divide society, Steinmeier added.

"Thirty years ago, this promise, this allure of democracy, drove hundreds of thousands of people in East Germany onto the streets," he said. "What courage they showed! It was these brave people, these peaceful heroes and heroines, who brought the Wall tumbling down."

"For the past 30 years we have lived in unity, in freedom, in a democracy. But please never think that this can be taken for granted," he said.

Nowadays, however, 43% of Germans say they are dissatisfied with how their democracy functions, according to an April survey conducted by the Pew Research Center. The 17% jump from 2018 stems largely from beliefs that the European Union's institutions are increasingly out of touch, and that growing immigrant communities want to be culturally distinct from their host countries, the study says.

It's Germans' prerogative to use their power at the ballot box to remake the country in their own image, Steinmeier said. Already in a string of elections over the past year, German voters delivered strong rebukes to parties long in power in favor of the anti-establishment, anti-immigration Alternative for Germany, or the environmentalist Green Party.

But calls for societal change shouldn't lose sight of the decency, solidarity and commitment to democracy that unite all Germans regardless of class, creed or political view, Steinmeier concluded.

"I know that all these qualities are present in you, in us, in this society," he said. "And that is why I believe in this country."