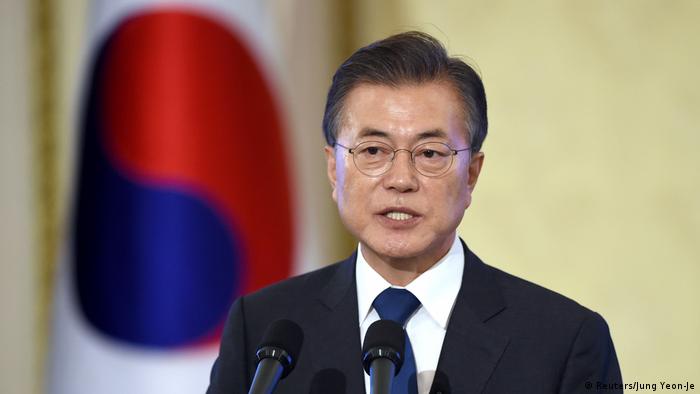 South Korean President Moon Jae-in is heading to neighboring China on Wednesday on his first state visit to the Asian powerhouse, where he will hold talks with Chinese President Xi Jinping and other high-ranking officials.

Moon and Xi last met on the sidelines of this year's ASEAN summit, which took place in November in the Philippines' capital Manila.

The South Korean leader's four-day China trip comes at a time of heightened tensions in Northeast Asia due to Pyongyang's advancing nuclear and missile programs.

On November 29, North Korea's reclusive regime led by dictator Kim Jong Un demonstrated its ability to target large parts of the US mainland by testing its Hwasong-15 ICBM, which the North claimed could deliver a "super-large heavy warhead" anywhere on the US mainland.

During his election campaign, Moon called for rapprochement and negotiations with Kim's regime. But it appears he's now changed his stance and is backing US President Donald Trump's strategy of imposing further stringent sanctions and hardship on Pyongyang - even to the displeasure of China.

Ties between Seoul and Beijing have also suffered in recent months due to a furious row over the deployment of the US-made Terminal High Altitude Area Defense (THAAD) anti-missile system on South Korean soil.

China's anger at THAAD's deployment in the South is related to its fear that the system's powerful radar can gaze deep into China and compromise its military capabilities.

The dispute derailed trade and investment relations between South Korea and China, denting the South's economic growth and hurting its businesses.

The Asan Institute for Policy Studies, a Seoul-based think tank, estimates that the retaliatory measures imposed by Beijing have caused losses worth around $7.5 billion (€6.4 billion) to South Korean firms.

Wang Jiangyu, a Korea expert and associate professor at the National University of Singapore, describes the dispute surrounding THAAD as "a historic event," something that had never occurred in bilateral relations. "These were always good and stable; there was no strategic conflict between them," he said.

But South Korea reached an agreement with China in late October that they would normalize exchanges and move past the dispute over THAAD.

In Beijing, Moon and Xi will discuss ways to "peacefully resolve the North Korea crisis," South Korea's presidential Blue House said. At the same time, however, it made clear that there will be neither a press conference nor a joint statement by the two heads of state. This has to do with the divergent positions on the deployment of THAAD, according to government sources in Seoul.

In a tough spot

Moon currently finds himself in a tricky position. On the one hand, he doesn't want to annoy his American allies; on the other, he wants to restore normal relations with China.

"In Washington, many have interpreted this as a weakness of Moon," said Andray Abrahamian, a Korea expert and visiting scholar at the Washington-based Center for Strategic and International Studies, a think tank. From the South Korean point of view, he noted, it's extremely important to find a way out of the Chinese sanctions, not least because of Trump's threats to terminate the Korea-US free trade agreement.

Moon faces "a tightrope act" and his actions would probably fail to satisfy any of the two major powers completely, the expert said. "Moon is also trying to find new business partners in the ASEAN region to reduce over-reliance on China," Abrahamian pointed out. At present, a quarter of South Korea's total foreign trade is with China.

Observers remain skeptical as to whether the Moon-Xi meeting can lead to progress in resolving the North Korean problem.

"The North Korean crisis is primarily a subject between the People's Republic of China and the United States," said Wang Jiangyu. South Korea plays only a minor role, although it must bear the consequences for everything that happens on the Korean Peninsula, the expert added.

China and South Korea, he noted, could do little more than reemphasize that war is not a solution. "China and the US still don't seem to be ready to cooperate on the North Korea issue."

- Why North Korea's latest ICBM launch is an opportunity

"In the West, the influence of China on North Korea is overestimated. Ultimately, Kim Jong Un wants to negotiate only with the US," says Kim Hong-gul, son of the late South Korean President Kim Dae-jung, whose legacy remains a source of controversy in South Korea.

During his presidency, Kim Dae-jung initiated the inter-Korean rapprochement process and met with the then dictator Kim Jung Il. Kim Dae-jung even received a Nobel Prize for his efforts to achieve peace.

Kim Hong-gul is one of only a few South Koreans who have met the North's current leader Kim Jong Un.

"Moon's calls for China to put more pressure on North Korea would be meaningless," said Kim Hong-gul. "Beijing will not allow a collapse of the North Korean regime because it would be against its interests," he argued.

Kim Hong-gul, however, believes that after the imminent completion of its missile and nuclear programs, North Korea will return to the negotiating table. "For many, this may sound utopian, but North Korea is perfectly capable of making a 180-degree turn."

The US and South Korea have begun their largest-ever combined aerial drills, days after the North fired its latest ICBM. Pyongyang has labelled the drills an "all-out provocation" and accused the US of "begging for war." (04.12.2017)

Moon's overture marks a shift in Seoul's policy towards a nuclear-ambitious Pyongyang. The South Korean Red Cross would also like to reunite familes kept apart by the frozen conflict. (17.07.2017)