For 50 years, ASEAN has given Southeast Asian nations a forum to address a long list of conflicts, catastrophes and crises. But there are limitations to what the association can accomplish beyond business and rhetoric. 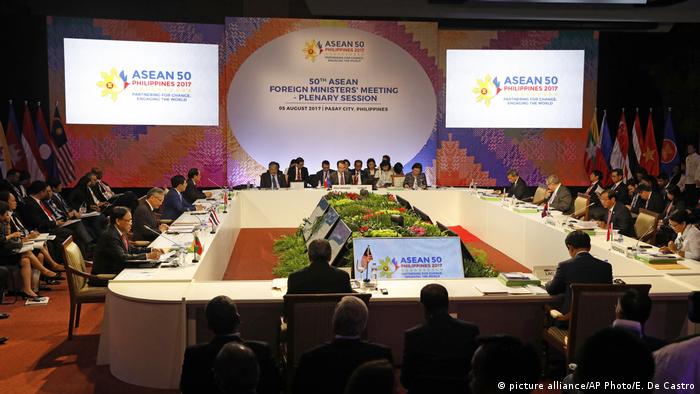 These issues beg solutions, but the fact that countries from around the region have a forum to meet and discuss important issues is an accomplishment 50 years in the making.

Founded on August 8, 1967 as an improbable alliance of Thailand, Malaysia, Indonesia, Singapore and the Philippines, ASEAN expanded after the Cold War to include Brunei, Cambodia, Laos, Myanmar und Vietnam. Today, 625 million people live in the territory under ASEAN, which east to west stretches the same distance as between Lisbon and Moscow.

The region is an area of extreme diversity. Three of the world's largest religions - Christianity, Buddhism and Islam - are all represented. ASEAN puts a country like Singapore, one of the richest in the world with an average yearly per capita income of around $82,000 (70,000 euros), in a union with places like Cambodia, a nation with a yearly per capita income of $3,300 (2,500 euros).

Politically, there are fragile democraciesin the Philippines and Indonesia. Some others are ruled by authoritarian governments. There is an absolute monarchy in Brunei. In Thailand there is a military dictatorship and single-party communist rule in countries like Laos and Vietnam.

The right way to go 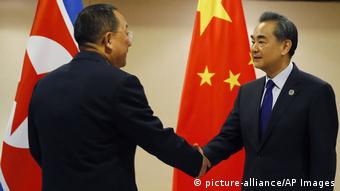 The Chinese and N.Korean foreign ministers, Wang Yi and Ri Yong Ho, were able to meet at the ASEAN summit on August 6

Keeping ASEAN together despite these deep cultural, economic and political differences - along with mistrust between different members - has always been an immense challenge.

The framework for cooperation is based on non-intervention and consensus. All ASEAN decisions must be unanimous. The alliance also is not permitted to intervene in members' matters of national interest.

This special political style is proudly known as the "ASEAN way." It is characterized by an informal and personal approach that aims at conflict prevention and is often not carried out in public. It is also important not to embarrass members or to drive them into a corner.

According to Adrienne Woltersdorf, director of the Friedrich Ebert Foundation's regional cooperation office in Singapore, there are many different perspectives on ASEAN's success. "In the region, ASEAN sees itself as being a successful organization, which is mostly connected with the founding of the economic union in 2015," Woltersdorf told DW.

In 2015, the "ASEAN economic community" was established to create a common market and the free exchange of goods, services, work and capital. Not all of these measures have been implemented, but there is no other area in which ASEAN works together so cooperatively and purposefully.

Andreas Ufen, a political scientist at the GIGA institute in Hamburg, said that there were also foreign policy successes to go along with the economic, but that this was "muted optimism."

"ASEAN has contributed to the strengthening of Southeast Asia vis-à-vis the USA, China and India," Ufen told DW, adding that without ASEAN, member states would be more vulnerable to world and regional powers.

The organization of international conferences and meetings by ASEAN plays an important role in giving Southeast Asian nations more international visibility. These are events like this week's ASEAN Regional Forum, or the ASEAN plus three (China, Japan, South Korea) or the ASEAN plus six (also including Australia, New Zealand and India).

"Other than ASEAN, there is no other organization in Asia that can bring so many countries, including Japan, China and South Korea, to one table," said Woltersdorf, adding that multilateral conferences and networking are an important accomplishment of ASEAN.

But there are still limits to ASEAN-inspired unity. Woltersdorf points out that China continues to succeed in dividing ASEAN members over the territorial conflict in the South China Sea. An example of this is with Cambodia in 2012 after the country - for the first time in ASEAN history - avoided mentioning the South China Sea conflict in a closing statement. 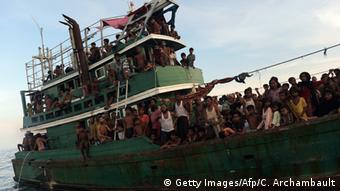 The image shows a boat with Rohingya migrants drifting in Thai waters in 2015. ASEAN has been unable to find a collective solution to the ongoing Rohingya refugee crisis

Territorial conflict with China is not the only area where ASEAN lacks cohesion from its members.

"With the exception of free trade and economic cooperation, ASEAN is mostly full of well-meaning rhetoric," said Ufen, adding that a good example of this was environmental politics.

In Indonesia forests are regularly cleared by fire and this leads to clouds of smoke causing public health issues in Singapore and Malaysia. There have already been two agreements made on this problem, but they have had little effect.

"Many authoritarian states in ASEAN are not ready to limit state sovereignty," said Woltersdorf. "If everything is going well then there is a community. As soon as there are controversial questions on the table, the community stops existing."

The expert considers human rights to be a failed policy area for ASEAN. "There is no common understanding for creating a catalogue of fundamental rights," she said." There was a declaration of human rights from ASEAN in 2012, but it lacks implementation and institutional structure.

"No human rights group can issue complaints to ASEAN independently from national governments," said Woltersdorf, adding that it was no wonder there are egregious human rights violations in ASEAN countries. 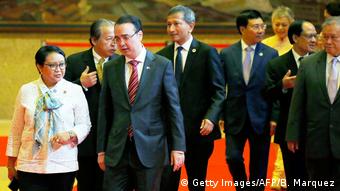 ASEAN foreign ministers arriving at the summit in Manila

The way toward the future

There are a lot of challenges to further integration of ASEAN countries and not a lot of room for new policy areas.

"I think that when the majority of nations in Southeast Asia democratize, it will be possible to take steps toward further integration," said political scientist Ufen.

More continued integration is also complicated by the fact that ASEAN is, for the most part, an elite project, removed from common citizens.

"Most people are astounded if you ask them if there is something like an 'ASEAN identity,'" said Woltersdorf. "They have never thought of that."

But continued integration and deepening of relationships are important to maintain the importance of ASEAN. "There are many voices that are saying ASEAN has to try a lot harder if it doesn't want to sink into irrelevance," said Woltersdorf.

One of these areas could be the fight against terrorism. "The spread of IS in the south of Thailand and the Philippines along with Malaysia and Indonesia presents a serious danger," said Ufen, adding that this might bring along deeper cooperation.

But more desirable would be the free development of democracy taking into account civil society and the observation of human rights.

ASEAN in the Fourth Industrial Revolution