The US and South Korea have begun their largest-ever combined aerial drills, days after the North fired its latest ICBM. Pyongyang has labelled the drills an "all-out provocation" and accused the US of "begging for war." 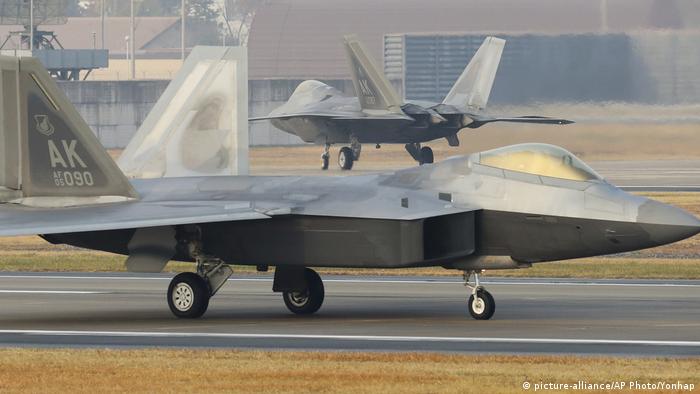 South Korea and the US launched five days of air combat drills on Monday, in what has widely been seen as the two countries' largest and most sophisticated joint military exercise to date.

The US intends to send some of its most important military assets, including six F-22 and 18 F-35 stealth fighter jets to South Korea for the exercises. This is the largest number of 5th-generation US fighters used in a single exercise, along with around 12,000 US service personnel, including marines and navy troops.

South Korean media reported that two long-range B-1B bombers could also join in the war games this week, although a US Air Force spokesman could not confirm the reports.

The North Korean regime was quick to denounce the joint US-South Korea drills, labelling them an "all-out provocation."

Pyongyang's state news agency KCNA warned on Sunday that the drills would push the peninsula "to the brink of nuclear war," although such language is commonplace in the North because the country views these regular military exercises south of its border as preparations for an invasion.

Over the weekend, North Korea's Committee for the Peaceful Reunification of the Country called Trump "insane," while KCNA, citing a military spokesperson, said the Trump administration was "begging for nuclear war by staging an extremely dangerous nuclear gamble on the Korean peninsula".

The joint drills were planned to take place before North Korea last week launched its latest and potentially its most advanced intercontinental ballistic missile (ICBM) test to date. However, the North's latest provocation has raised the urgency around the drills.

The North's latest missile is believed to have remained airborne for around 50 minutes before landing in the Sea of Japan. Following the test, Pyongyang boasted that it was capable of delivering a "super-large" nuclear warhead to the US mainland at any time.

US military officials have cast doubts over those claims saying that, while the latest test demonstrated a significant improvement in range, a missile carrying a much heavier nuclear warhead would struggle to travel as far.

Still, with tensions surging between US President Donald Trump and North Korea's Kim Jong Un, senior US officials have appeared increasingly concerned over the threat of war.

Republican Senator Lindsey Graham, a foreign policy hawk, warned on Sunday that the US was moving closer to "pre-emptive war" with Pyongyang. "If there's an underground nuclear test (by the North), then you need to get ready for a very serious response by the United States," Graham told "Face the Nation" on US broadcaster CBS, adding that he believed it was time for families of the 28,500 US troops stationed in South Korea to leave.

The US has not announced any formal decision to evacuate its citizens from the peninsula.

McMaster told Fox News: "If necessary, the president and the United States will have to take care of it, because he has said he's not going to allow this murderous, rogue regime to threaten the United States."

The isolated rogue nation has staged six increasingly powerful atomic tests since 2006 -- most recently in September when it supposedly detonated a hydrogen bomb.

Since the beginning of the year, Pyongyang had conducted missiles tests at a rate of almost two to three per month, but paused in September after it successfully fired a missile over the northern Japanese island of Hokkaido and into the Pacific Ocean.

Wednesday's ICBM launch was the North Korean regime's first since then.