The United States has flown part of its stealth fleet from Japan to just south of the border between the two Koreas. The move was meant as a warning to North Korea over its missile launches. 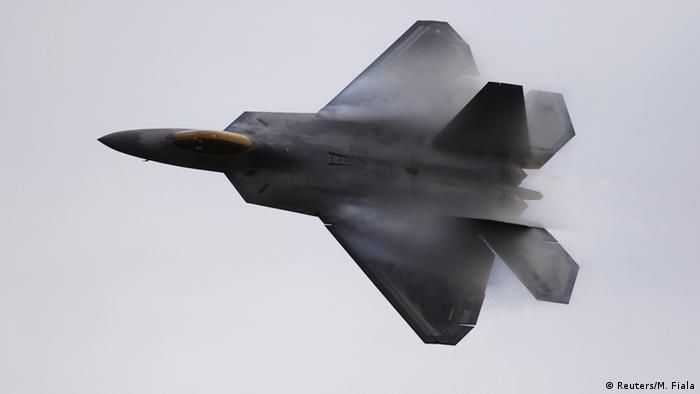 In a display of force to Pyongyang, four US stealth jets flew over South Korea on Wednesday. The fighters landed at an air base near Seoul in retaliation for North Korea's continued nuclear and missile tests, which have come in the face of international sanctions.

"The F-22 'Raptor' is the most capable air superiority fighter in the world, and it represents one of many capabilities available for the defense of this great nation," said Lt. Gen. Terrence J. O'Shaughnessy after the planes took off from a US base in Japan, escorted by eight other fighter jets also from the United States and South Korea.

"The US maintains an ironclad commitment" to help Seoul protect itself, O'Shaughnessy added.

It is normal practice for the United States to fly warplanes close to the border between the two countries during times of increased tensions with North Korea. The F-22 jets are able to thwart radar, and their flight on Wednesday comes a month after a US heavy bomber made the same trip in response to the North's testing of a nuclear bomb a few days earlier.

Despite a UN resolution prohibiting such action, North Korea went forward with its fourth nuclear test, followed by a long-range rocket launch on February 7. Pyongyang said the rocket launch was to put a satellite in orbit. Analysts consider these steps to be provocations and clear signs that North Korean leader Kim Jong-Un is determined to create a missile capable of striking the US mainland.

The US has sent another Patriot missile battery to South Korea ahead of upgrades to the region's missile defense system. The move came as a report confirmed that North Korea's missiles posed no threat to the US. (13.02.2016)

North Korea has made headlines in 2016 with a bomb test, a rocket launch and now a rebooted plutonium reactor. East Asian expert Rüdiger Frank argues that the message is directed more inward than to the outside world. (11.02.2016)