In a speech, South Korean President Park has said her country has become "numb" to threats from North Korea. Her call for an 'uncompromising' stance comes amid discussion about implementing a missile defense system. 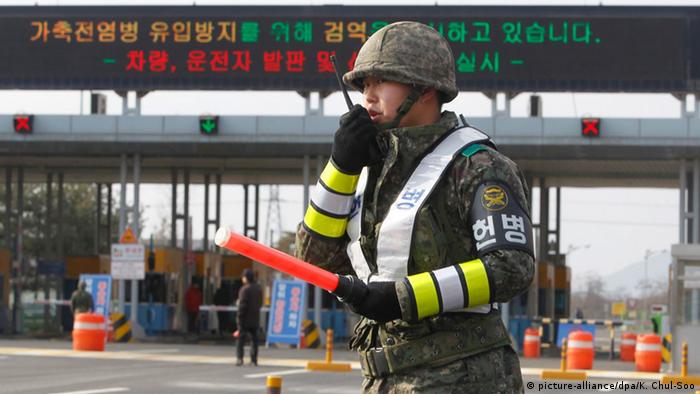 "It has become clear that we cannot break North Korea's will to develop nuclear weapons through existing means and goodwill," Park said it remarks carried on national television. "It's time to find a fundamental solution for bringing practical change in North Korea and to show courage in putting that into action."

North and South Korea have maintained an uneasy armistice since the end of the Korean War in 1953. Events deemed provocative by both sides are a frequent occurrence, with North Korea most recently conducting a number of exercises aimed at showcasing its nuclear weapons capability.

While she did not mention concrete steps South Korea would take, Park said the government of the North's Kim Jong-Un was "speeding without a brake" and that a nuclear weapon was inevitable unless South Korea intervened.

"[The South Korean government] will take stronger and more effective measures to make North Korea bitterly realize that it cannot survive with nuclear development and that it will only speed up regime collapse," Park said.

Her comments echo the sentiment shared by the US and Japan, both South Korean allies. This week South Korean officials are scheduled to discuss the possibility of deploying a missile defense system with their American counterparts. South Korea would host such a system, which risks drawing the ire of Beijing.

In taking a harder line against North Korea in Tuesday's speech, Park has departed from her previous policy of attempting to engage North Korea in a dialogue aimed at reunification. Park's said that the current policy of "Trustpolitik" to establish goodwill with North Korea was wrong.

North Korea has made headlines in 2016 with a bomb test, a rocket launch and now a rebooted plutonium reactor. East Asian expert Rüdiger Frank argues that the message is directed more inward than to the outside world. (11.02.2016)

In the aftermath of North Korea's missile launch and with growing concern over yet another nuclear test, is northeast Asia on the brink of an arms race? Julian Ryall reports from Tokyo. (09.02.2016)