North Korea has defied international warnings and fired a long-range rocket which may be a cover for a banned test of technology for a missile capable of striking the US mainland. 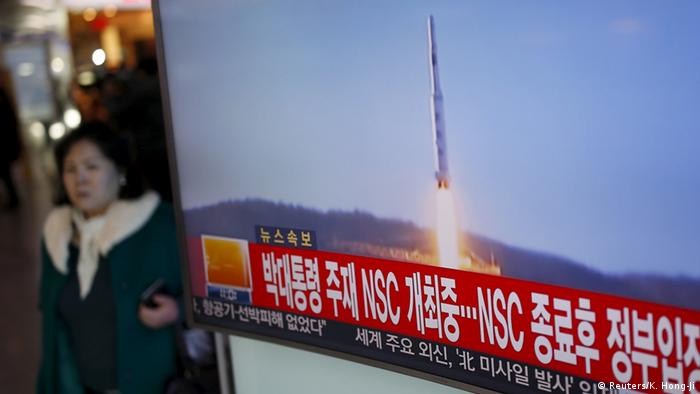 South Korea's military announced on Sunday that its communist neighbor to the north had launched a long-range rocket - in defiance of warnings from the US, Japan and Seoul.

In a special announcement read on state-run North Korean TV, the satellite launch was confirmed, with the newsreader saying more satellites would be launched.

North Korea said the launch of its satellite Kwangmyongsong-4, named after late leader Kim Jong Il, was a "complete success," and that it was making a polar orbit of the earth every 94 minutes.

The UN Security Council is to hold an emergency meeting on Sunday at the request of the US, Japan and South Korea to discuss the launch. A spokesman for Secretary General Ban Ki-moon deplored the launch, which he said was in violation of Security Council resolutions against Pyongyang's use of ballistic missile technology.

US authorities confirmed the launch, but said they did not believe it posed a threat to the US or its allies. "We can confirm ... that we have detected a launch from North Korea, that initial indications are that it does not pose a threat to the US or our allies," an official told the Reuters news agency.

According to Japan's NHK broadcaster, the Japanese government said the rocket passed over the southern Japanese island of Okinawa. No anti-missiles were fired. Prime Minister Shinzo Abe condemned the launch, saying it was a violation of UN Security Council resolutions.

China's official Xinhua news agency said in a commentary that the rocket launch on Sunday would worsen tensions on the Korean peninsula. The Korean peninsula cannot be nuclearized or descend into war, the commentary added, saying all parties should deal with the situation calmly to keep it from spinning out of control.

Xinhua commentaries are not official government statements but can indicate official thinking in China.

North Korea had told United Nations agencies it would launch a rocket carrying what it called an earth observation satellite at some point over the next eight days. The announcement triggered international opposition from governments that viewed it as a long-range missile test.

On Friday, US government sources said intelligence agencies believed North Korea could be ready to launch the rocket by the US Super Bowl kickoff on Sunday. In fact, it came several hours earlier.

Last month Pyongyang claimed to have tested a hydrogen bomb. Further sanctions and condemnation from the UN are likely to follow.