South Korea and China have agreed to speedup efforts to normalize their relations. Ties between the nations have been strained over the deployment of a controversial US missile defense system. 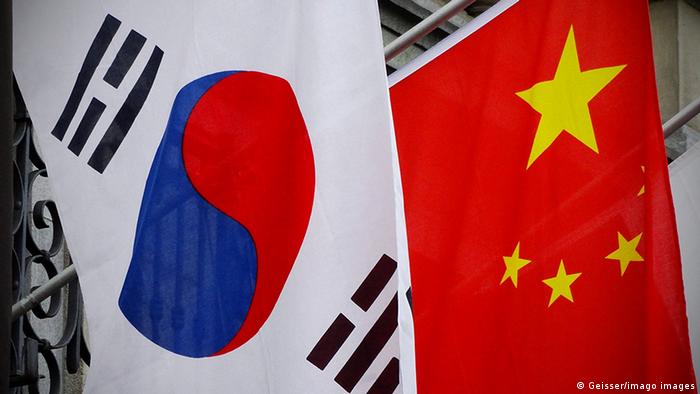 South Korea's foreign ministry announced Tuesday that both sides had agreed to talks and backed a plan to "expeditiously bring exchange and cooperation in all areas back on a normal development track."

The installation of the US Terminal High Altitude Area Defense (THAAD) system in South Korea resulted in a year-long standoff with damaging implications for trade and diplomacy between the two nations.

An angry Beijing voiced fears THAAD's powerful radar could be used to peer into Chinese territory, while Seoul maintained the system served solely to defend against escalating nuclear threats from North Korea.

China's foreign ministry said in a statement Tuesday that it had spoken with Seoul, which "recognized China's position and concerns on the issue of THAAD."

Beijing reiterated its opposition, but said South Korea had made it clear that the system "was not aimed at third countries ... (and) would not harm China's strategic security interests."

In a bid to improve bilateral ties, South Korean President Moon Jae-in is expected to meet with China's president, Xi Jinping, on the sidelines of a summit of Asia-Pacific Economic Cooperation (APEC) countries in Vietnam next week.

The THAAD deployment this year followed a series of recent North Korean ballistic missile and nuclear tests. Pyongyang's nuclear program, which aims to develop a weapon capable of reaching the United States, has been met with tough sanctions from the United Nations and the US.

Separately on Tuesday, NATO chief Jens Stoltenberg urged all UN members to fully and transparently implement sanctions against North Korea, saying its "ballistic and nuclear tests are an affront to the United Nations Security Council."

"They pose a global threat which requires a global response," Stoltenberg said in Tokyo, where he met Japanese Prime Minister Shinzo Abe.

Stoltenberg's trip to Tokyo comes ahead of US President Donald Trump's first official visit to Asia, which starts in Japan on Sunday.

Trump has warned North Korea it would be totally destroyed if it continued to threaten the US with ballistic missiles and nuclear weapons.

The United States is pushing for diplomacy with North Korea, but has said it has "many" military options against Pyongyang. While pledging to work with China, it has hinted at tactics that would not put Seoul at risk. (19.09.2017)

South Korea and Japan have presented a united front against North Korea, agreeing to coordinate their response on the hydrogen bomb test. While the EU is mulling new sanctions, Russia has called for talks. (07.09.2017)