In probably her last meeting with Vladimir Putin as German chancellor, Angela Merkel urged Russia to communicate with the Taliban the importance of evacuating civilians from Kabul. 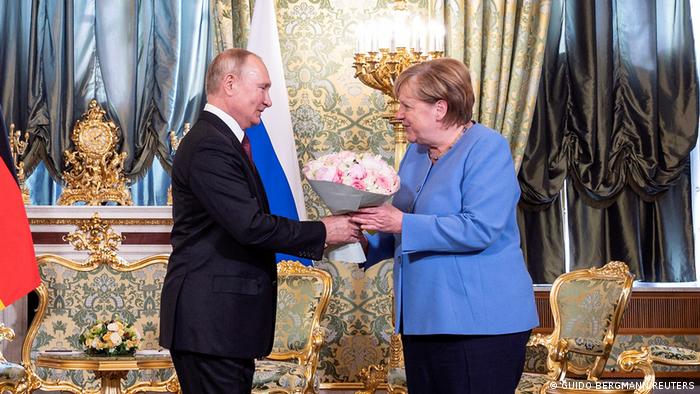 Merkel met with Putin in probably her last visit as chancellor

The remarks came during Merkel's trip to Moscow — likely the last in her capacity as chancellor as she is due to step down from politics following Germany's general election in September.

But it also came at a time of immense global strife, just days after the Taliban' seized control of Afghanistan, rising tensions in Ukraine, and with Russian dissidents sitting in jail

What did they say about Afghanistan?

The two leaders have had different ideas about the Taliban's capture of Kabul. Merkel has described the situation as "bitter, dramatic and terrifying."

Moscow, meanwhile, is seeking to open channels of communication with the Islamist group and appears to be looking to foster some sort of relationship with the Taliban.

Merkel called on Russia to communicate with the Taliban that there was willingness to work with the militant group on humanitarian grounds if they allow the safe evacuation of Western-allied Afghans.

"I have given information that we in Germany consider it most important to evacuate people who have worked for over 20 years for us. Those citizens of Afghanistan should receive a place to stay in Germany," Merkel said.

Putin called on the international community to prevent the "collapse" of Afghanistan.

"The Taliban movement control almost the entire territory of the country," he said. "These are the realities and it is from these realities that we must proceed, preventing the collapse of the Afghan state."

Merkel also alluded, in less direct terms, to the Taliban having established facts on the ground in recent days.

Merkel's visit comes one year since Putin's fiercest critic, Alexei Navalny, was poisoned with a Soviet-era nerve agent. Navalny was taken to Berlin for treatment. He later returned to Russia and was jailed on arrival, ostensibly for violating the terms of his bail on a prior conviction.

"I demanded from the Russian leader that he free Navalny," Merkel said. "And I made clear that we will keep doing that," she said, calling the situation around Navalny "distressing." Merkel also noted how the prior conviction had been deemed "unproportionate" by a European human rights court.

Putin has long denied ordering the poison attack and refuses to say Navalny's name in public. He referred to his challenger as "the defendant" who was behind bars "for criminal offenses."

"I would ask that the judicial decisions of the Russian Federation be treated with respect," he said.

Putin asked Merkel to work toward a peaceful solution to the conflict in eastern Ukraine, stressing that there was no alternative to the Minsk peace agreement.

Merkel — who is due to hold talks with Ukraine's President Volodymyr Zelenskyy on Sunday — said there was a stalemate, and people continued to die.She added that she hoped for some progress to be made in the next few weeks.

Besides the armed conflict, Ukraine also opposes the construction of the Nord Stream 2 pipeline from Russia to Germany, fearing that it would affect its status as a gas transit country.

Putin said Russia was ready to send gas via Ukraine even after the end of their current deal, in 2024, but said Moscow needed to evaluate the scale of demand for its fossil fuel first.

"And for this, we need to get an answer from our European partners on how much they are ready to buy," he said.  "We cannot sign a transit contract if we don't have supply contracts with our consumers in Europe."

The end of an era?

Despite their strong political differences, the two have managed to keep lines of communication open over the years.

Some would argue that over 16 years of Merkel's leadership, it would have been difficult not to have fostered some type of working relationship.

The two are able to speak one another's languages fluently and their exchanges over the years have become talking points.

Putin and his large black Labrador called Konni featured in one of the more memorable visits in 2007.

Merkel, who was once bitten by a dog, appeared visibly uneasy as the Russian president's dog casually strode in and gave the German chancellor a couple of sniffs.

"I think although the Russian president knew very well that I was not exactly eager to meet his dog, he brought it with him. But that's the way it was. And you can see how I was trying to stay brave, by looking in Putin's direction and not at the dog," she told German newspaper Süddeutsche Zeitung at the time.

In 2006, Putin had also given her a black and white stuffed toy dog as a gift.

Merkel's eye rolls, most prominently on display during talks with Putin at a summit in 2017, will no doubt also be missed in future exchanges between the two states.