Will Moscow shake hands with the Taliban?

Russia has reacted calmly to the changeover of power in Afghanistan. It was better prepared than the West for the Taliban takeover. It may even recognize the leadership of the terrorist militia. 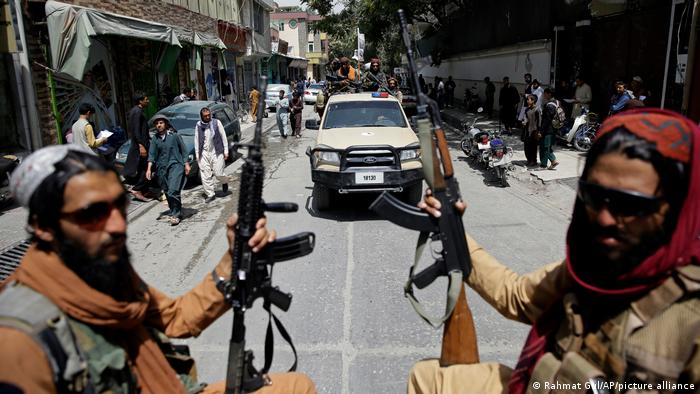 Moscow has been cautious in its comments on the Taliban takeover

"We are not worried." This comment by the Russian president's special envoy to Afghanistan, Samir Kabulov, sums up Moscow's reaction to the changeover of power there. On Sunday, Kabulov justified this stance on the state television channel Russia-1, saying that Russia had "good relations" with both the former Afghan government and the Taliban. This despite the fact that the terrorist militia is banned in Russia.

Russian embassy will remain in Kabul

While the West seems to be in shock at the Taliban's rapid advance, and is scrambling to fly thousands of Western citizens and Afghan aid workers out of Kabul, Russia has remained pointedly reticent.

The Russian Embassy in the Afghan capital is one of the few that are not being evacuated. In an interview with the Echo of Moscow radio station, Russia's ambassador in Kabul, Dmitry Zhirnov, praised the Taliban, saying that, in negotiations with regard to security for the embassy, their approach was "good, positive, business-like."

Was Moscow better attuned to recent developments than the West? Yes, says Andrey Kazantsev, an Afghanistan expert and director of the Analytical Center at the renowned Moscow State Institute of International Relations (MGIMO). "Russia did prepare better than the others," he confirms.

According to Kazantsev, Moscow made clear that, in the light of the Soviet Union's experience in Afghanistan – which ended with the withdrawal of Soviet troops in 1989 after almost 10 years of conflict – Russia would not invade. However, it also showed that it was prepared to protect the former Soviet republics in Central Asia.

Some of these, such as Tajikistan, are allied with Russia through the Collective Security Treaty Organization (ODKB). "There were military exercises focusing on this," Kazantsev told DW. "Various scenarios were tested with the aim of preventing various terrorist groups from infiltrating across the border." 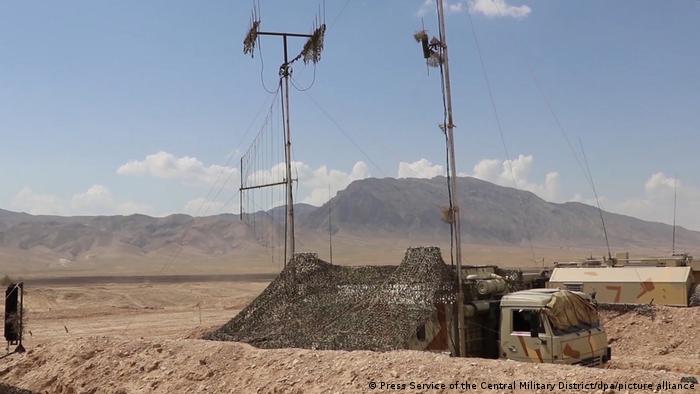 Russia has been holding military exercises with Tajikistan, which has the longest border with Afghanistan

On Tuesday, Russia began a new military exercise in Tajikistan, where it has a base. This is the third exercise Russia has taken part in in the region in the space of a few weeks. Of all the former Soviet republics, Tajikistan has the longest border with Afghanistan – more than 1,300 kilometers (808 miles).

Kazantsev says that, for its part, the Russian Foreign Ministry is working to "make it unnecessary to defend Central Asia by force of arms," and is also in talks "with key regional players such as China, Iran, Pakistan and India." He explained that diplomatic contacts were important, because there was a risk that a new civil war might break out, and Russia and Central Asia could get drawn in.

Wolfgang Richter, a retired colonel and senior associate at the German Institute for International and Security Affairs (SWP) in Berlin, explains Russia's apparent calm by saying that Moscow "never shared" the West's "illusion" with regard to building a democratic state with women's rights in Afghanistan.

The West, says Richter, has acquired the impression that Russia "almost courted" the Taliban. There have been contacts at various levels, and in July, Taliban representatives were received in Moscow.

Nonetheless, Richter does not believe that Moscow really is relaxed about the Taliban takeover. He thinks it will pursue a "dual strategy" with regard to Afghanistan.

On the one hand, he says, Russia will seek an agreement with the Taliban to prevent it supporting the al-Qaeda offshoots in Central Asia. At the same time, it will strengthen the Central Asian republics if there are clashes on their borders.

The key question for Russia, Richter believes, is likely to be whether the Taliban will confine itself to the national project of establishing an Islamic Afghan emirate, or whether it will cooperate with Islamist jihadi forces, as it did 20 years ago. 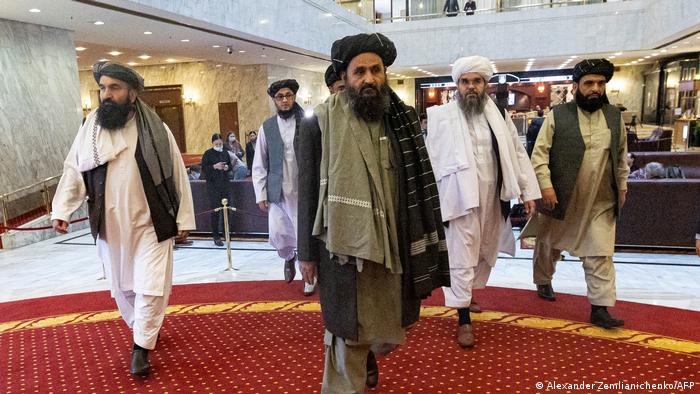 Moscow hosted an international conference on Afghanistan in March

The Moscow-based Afghanistan expert Andrey Serenko doesn't think it will be easy for Russia to reach an agreement with the Taliban. He believes that, in hoping that the Taliban will fight IS and al-Qaeda structures, Russian diplomats are being over-optimistic. "The line between the Taliban and IS in Afghanistan is a fluid one," says Serenko.

Another problem, he explains, is the fact that the Taliban is classified as a terrorist organization in Russia. "It will be very difficult for Moscow to explain why the Taliban should no longer be considered dangerous," Serenko says. He believes that Russian diplomats praising the Taliban is the "preparation for recognition," but that Russia would coordinate any such decision with China, and that they would most likely make a joint announcement.

Andrei Kazantsev of MGIMO describes the Taliban's status in Russia – namely, that of a terrorist organization – as an "anachronism" that "should have been lifted at the technical level long ago."

However, he qualifies this by saying that it can only happen along with recognition of the new government in Kabul. Russia is likely to impose conditions for this, Kazantsev says, such as security guarantees for Central Asia, and possibly also assurances that the Taliban will not support terrorist groups that target Russia.

In an interview with the Russia-24 television channel, Samir Kabulov, the Russian president's special envoy to Afghanistan, said that Moscow would only remove the Taliban from its list of terrorist organizations when the UN Security Council did so, and that the Taliban must first show how "civilized" they were being. And Russian Foreign Minister Sergei Lavrov also expressed caution on Tuesday.

Overall, the triumph of the Taliban has triggered mixed feelings in Moscow, which has had its own Afghanistan trauma to contend with since the Soviet era.

According to Andrey Kazantsev, recent events, which have been viewed by Western media as a defeat of the West, are being perceived in Moscow as "a second Vietnam." However, he adds that the Kremlin is concerned, as the Taliban victory has the potential to serve as a model for Islamist groups worldwide.

Andrey Serenko also warns of the possibility of a Tajik or Russian Taliban, and he cautions that a new myth is being created – one that, as yet, no one is prepared to fight.