Is the Kremlin scared of a group of TikTok bloggers? | Europe| News and current affairs from around the continent | DW | 12.03.2021

Is the Kremlin scared of a group of TikTok bloggers?

TikTok became a site for anti-Kremlin content during recent opposition protests in Russia. Now, the tightening grip of the authorities on social media platforms and the internet could push bloggers into opposition. 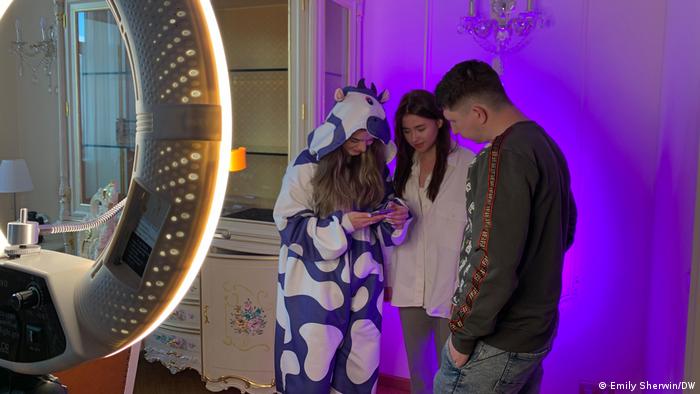 A song blares on loop as two young women practice their dance moves, moving in synch. Around the living room, around 10 people perch on white and gold baroque-style wooden furniture and stare at their phones. This is a so-called TikTok House in Moscow.

TikTok is a fast growing Chinese social media platform, which a recent survey shows has overtaken Facebook in terms of popularity in Russia. It has over 20 million active users in the country.

The PR agency Social Stars runs this TikTok House and represents around 20 bloggers. Several of them regularly come to the Moscow apartment on weekends. They collaborate on creating content and meet with their producers from the agency to consult on how to increase their audience online.

Several of the bloggers here have over a million followers — and they say they have to post about two or three videos a day on the fast-moving platform to keep those numbers going up. TikTok creates a personalized timeline of short videos for users to scroll through.

Mostly, the Social Stars bloggers post acting challenges, pranks, dance trends, and videos of them lip-synching along to pop songs. One of the women here mostly makes videos of herself eating or unwrapping chocolate bars. The 18-year old is in a purple and white cow onesie and introduces herself as "Milka" (after her favorite chocolate company), before going back to tapping around on her phone screen with long lilac fingernails.

Looking around, it's hard to believe that this is the Kremlin's newest threat online. But recent Russia-wide opposition protests in support of politician Alexei Navalny gave rise to a wave of anti-government TikTok videos. In one viral trend, Russian teenagers filmed themselves replacing classroom portraits of Russian President Vladimir Putin with portraits of Alexei Navalny. Another trend was for people to film themselves getting ready to take part in protests against Navalny's arrest. 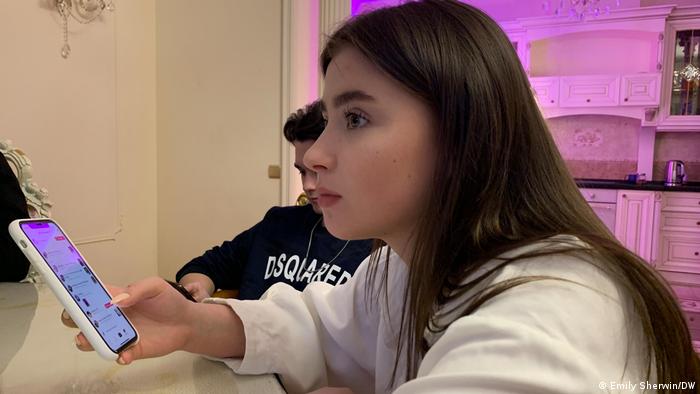 A sudden wave of politics

Russia's media watchdog Roskomnadzor reacted by calling on several social media sites including TikTok, Facebook and Twitter to take down videos calling for minors to take part in "unauthorized protests." Putin used a recent meeting with the police to call on law enforcement agencies to monitor the internet more closely to protect young people from those trying to lure them into committing "illegal actions," including protests.

This week, the authorities slowed the speed of Twitter as a punishment for the social media platform apparently having failed to remove thousands of "illegal" posts, including Tweets relating to suicide, drugs and child pornography. Roskomnadzor threatened to block Twitter completely for non-compliance — clearly a warning to other social networks.

To the bloggers at the Moscow TikTok house, the sudden flood of political content on TikTok in recent months came as a shock. Most of them insist they want nothing to do with politics. 17-year-old TikToker Veronika Reznikova says she hopes the political videos were just a short-term trend. Reznikova's claims her most popular videos are of her acting, particularly "when I cry or look sad."

"I went on TikTok during the protests and there was none of the usual content in my feed, content like the kind I film.  It was all only politics — Navalny and Putin, who is for whom. It freaked me out. I stayed off TikTok for a few days," she says. 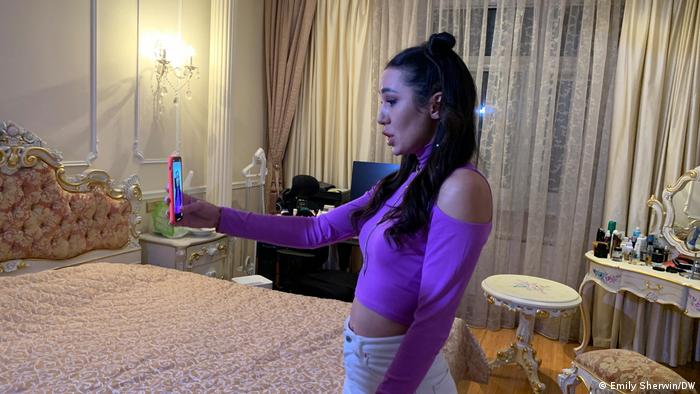 Diana Sonina, a 28-year-old fitness and weight-loss blogger, also says she doesn't want TikTok to become political. "It's a social media platform for self-expression, where people can take in new ideas and develop their talents," she says. "There is so much negative stuff around us already, on state television and so on. If that stuff is on TikTok as well, then we will just drown in all these problems."

But one of the owners of the TikTok House, Maxim Petrenchuk, says it's actually the success of "educational" content like Diana's that reflects a change on TikTok — a change that could mean politics is on the platform to stay. "People are getting tired of watching pure entertainment content. TikTok is moving more towards expert and educational content," he says, adding that the audience on the social media platform is also changing, as older users join. 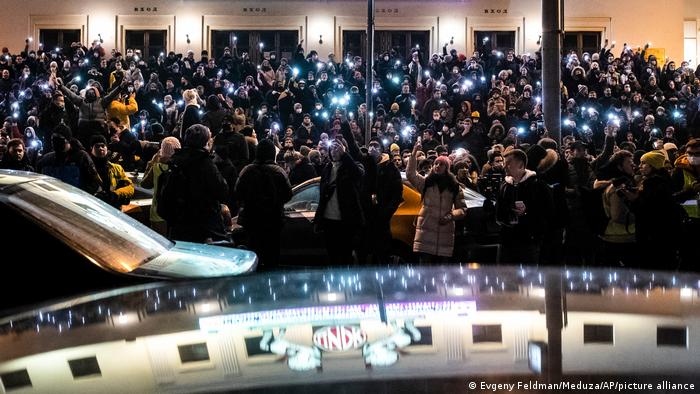 Evgeny Osadchy, who works as a producer at the PR agency, says he tries to give his bloggers full creative freedom as he advises them on their videos — but he is always "monitoring" their content. People are regularly detained or fined for retweeting or reposting things on social media platforms. Osadchy says he sometimes warns his proteges to stay away from certain topics, like "politics, gender equality or LGBT rights" that could come back to bite them in the future.

Dialling up the pressure

Internet censorship and increasing government control online have been on the rise in Russia for years now. The authorities have been pushing for social media companies to store user data in Russia and open offices in Moscow. They have introduced the possibility to label individuals like bloggers "foreign agents" and have been also working on the possibility of isolating Russia's internet from the world wide web, allegedly to protect Russia from external attacks.

Sarkis Darbinyan, the founder of Roskomsvoboda, an NGO pushing for internet freedom in Russia, says the only thing currently stopping the authorities from completely blocking social media platforms like YouTube is that they are important for the business of big Russian government companies. 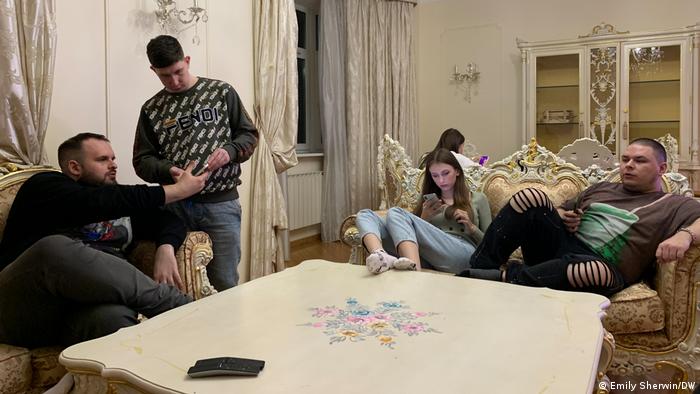 PR agencies have created TikTok houses to consult their bloggers, including on political risks

Darbinyan is convinced TikTok is on the Kremlin's radar as a new and fast-growing social network. And according to political scientist Abbas Gallyamov, TikTok's young audience could make it an even more significant threat for the Kremlin. Nearly 60% of TikTok users in Russia are currently under 35. "The protest movement has gotten significantly younger and opposition attitudes are spreading through the ranks of young people faster than in other age brackets," Gallyamov says.

Back at the TikTok House, Maxim Petrenchuk thinks the Kremlin is dealing with that potential threat all wrong. He says the authorities' policy of pressure and presentation of bloggers as "members of the opposition" could politicize TikTokers.

"Talking about banning things doesn't help. It just upsets people," he says. "Most bloggers are not for Putin or against him, they are just doing their thing. But when they are told they are freaks, when they are stigmatized, told they are good-for-nothings, the bloggers start feeling they are being excluded from the country and feel angry at the government."