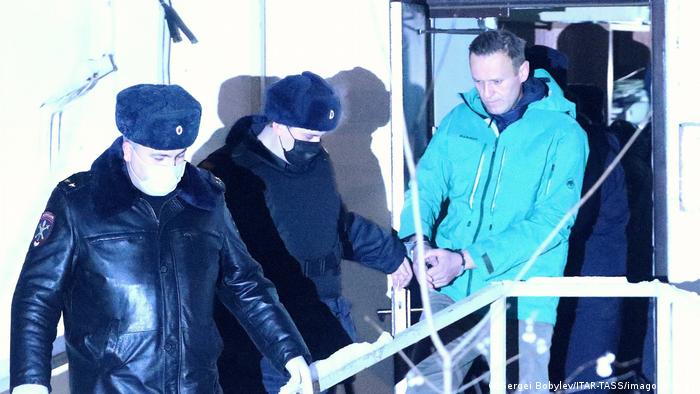 He was handed a 30-day jail sentence for violating the terms of a suspended sentence he was given in 2014 on fraud charges that he says are politically motivated.

The department will take "all necessary measures to ensure law and order," it added.

The police department blamed "the media, the internet and social networks" for organizing the demonstrations in its statement.

Following Navalny's arrest, many Russians took to social media including TikTok, a video app popular among teenagers, and even dating app Tinder — to voice support and urge a large turnout at rallies across the country on Saturday.

DW Russia correspondent Emily Sherwin said one TikTok video trend that had surfaced was of supporters practicing their English in an attempt to avoid arrest at Saturday's upcoming protests.

The users were inspired by a video of police at a protest saying: "He's American, let him go!" went viral last year.

Other public figures, including some who usually keep out of politics, also spoke out against Navalny's arrest. Monetochka, a 22-year-old pop star, called for Navalny to be released in a post on Instagram.

"This is not about politics but about civil society and justice," she said.

Navalny's associates also urged Russians to take to the streets despite official pressure. They promised financial help to protesters given fines on Saturday.

"Putin is doing everything to intimidate you," Ivan Zhdanov, the head of Navalny's Anti-Corruption Foundation, wrote on Facebook.

Several close Navalny associates, including prominent activist Lyubov Sobol and his spokeswoman Kira Yarmysh, were detained late on Thursday for calling on Russian's to join the protests.

Navalny voiced support on Friday for young Russians who have been posting messages of solidarity on social media.

"Respect to the schoolchildren who, according to my lawyer, 'wreaked havoc on TikTok,'" the prominent Kremlin critic said in a message posted on Instagram via his lawyer.

In the wry message, Navalny also emphasized that he was in good physical and mental health.

"I don't plan on hanging myself from the prison bars," he quipped. "My psychological and emotional state is completely stable."

In a separate post on Instagram, Navalny's wife Yulia Navalnaya wrote that she plans on joining the protests in Moscow.

"For myself, for him, for our children, for the values and ideals that we share," she said.