Lawmakers are close to passing a bill that would rewrite the rules of the internet in Russia. Protesters have rallied in Moscow, saying the law would isolate Russians and pave the way for nationwide censorship. 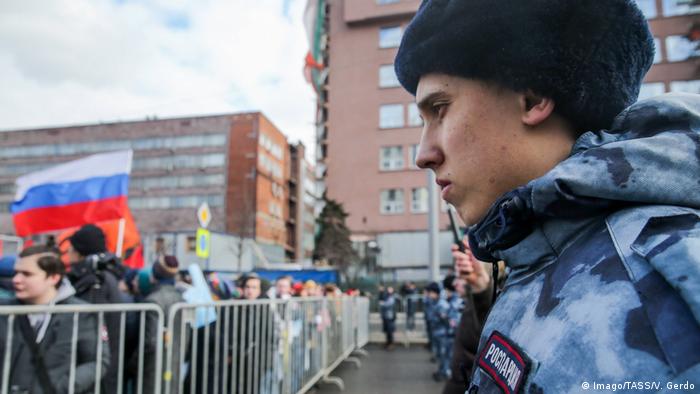 Thousands of protesters gathered in Moscow on Sunday to rally against a draft law that aims to reconfigure the foundation of Russia's internet. More than 15,000 people participated, according to independent monitor White Counter. Interfax news agency put the number at 6,500.

At least 16 people were arrested ahead of the protests, which were authorized by authorities. Eight of them were detained for using "floating devices" when they released blue balloons in a sign of protest, according to Russian news agency Interfax, citing protest organizers.

"Freedom, including freedom of the internet, is the most important thing we have. There are a lot of repressive laws on free speech and other things already," an elderly woman at the protest told DW. "It reminds me of my youth, and I don't want this for my children and my grandchildren."

Critics said the draft law, which is widely expected to pass, would lead to censorship and create an "online Iron Curtain" that cuts Russians off from the rest of the world.

"If they take that, we will have nothing," Mikhail Svetov from the Libertarian Party told DW. "We don't have free elections, we don't have press freedom, the television is completely controlled — the internet is the only place where we talk about corruption."

Currently, "the internet is quite free" even though things have become worse over the past five years, Svetov said. "But if we allow this law to pass, then in five years we won't be able to speak about [internet freedom] anymore. That is very scary."

One protester held up an image of Pavel Durov, the Russian creator of encrypted messaging service Telegram. Russian authorities have pressured Durov to hand over the company's encryption keys. He has openly supported the protests.

The bill's authors claim that the law is aimed at enacting "defense mechanisms to ensure the long-term stable functioning of internet networks in Russia." It proposes the establishment of a center to "ensure and control the routing of internet traffic" in the country.

The bill also paves the way for mandatory "drills," which would test where the internet in Russia could operate in an isolated mode. But Artyom Kozlyuk, who leads the anti-internet regulation Roskomsvoboda group, said the law "permits limiting rights and freedoms on the internet."

"North Korea's experience shows that a totally autonomous internet is possible," Kozlyuk said, noting that a Chinese-style firewall to filter inbound and outbound internet traffic would cost too much, comparatively.

This is not the first time Russia lawmakers have clamped down on internet freedoms.

Earlier this week, the Duma passed a bill penalizing media outlets as well as individuals that publish fake news and insult the government online. Critics say the bill could suppress what the government deems undesirable content.

In 2014, the Russian parliament passed a law forcing bloggs with more than 3,000 daily views to register as media organizations, bringing them under state regulation. The so-called blogger law was seen at the time as a crackdown on activists.