Hong Kong protests: Carrie Lam misses her chance to restore calm | Asia | An in-depth look at news from across the continent | DW | 17.10.2019

Hong Kong's leadership has tried to win back public trust to calm protests. But with the demands of the pro-democracy movement, and with the chief executive sticking to the status quo, a breakthrough remains unlikely. 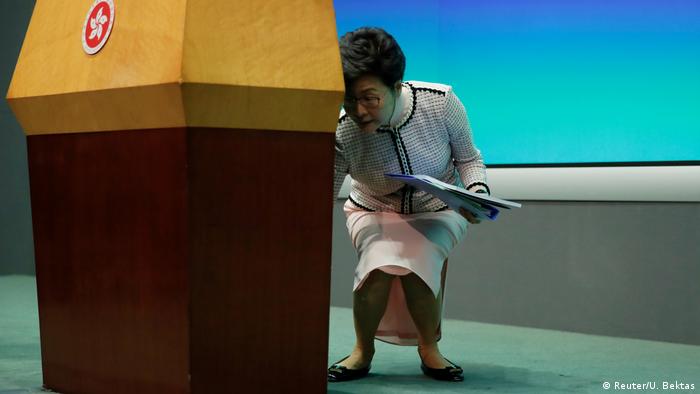 Every year, Hong Kong's chief executive delivers a policy address, a speech giving the city leadership the chance to speak directly to the people, address strengths and weaknesses and chart a path toward the future.

This year, however, Hong Kong's leadership is facing an unprecedented crisis, with millions of demonstrators having taken to the streets regularly since June in sometimes violent protests against the city government.

The annual address could have been Chief Executive Carrie Lam's chance to connect with Hong Kongers, address their concerns and try and walk the political tightrope between the interests of the pro-democracy demonstrators and those of Beijing.

However, Lam was unable to even deliver the speech Wednesday after pro-democracy politicians in the legislative chamber interrupted the address. Instead, she broadcast a prerecorded speech via a video link.

And rather than reaching out to demonstrators and addressing their concerns head on, Lam tried to divert attention away from the bitter divisions in the city. In the canned speech, Lam offered appeasement by making an announcement on reforms to tackle Hong Kong's housing problem and build 10,000 housing units. 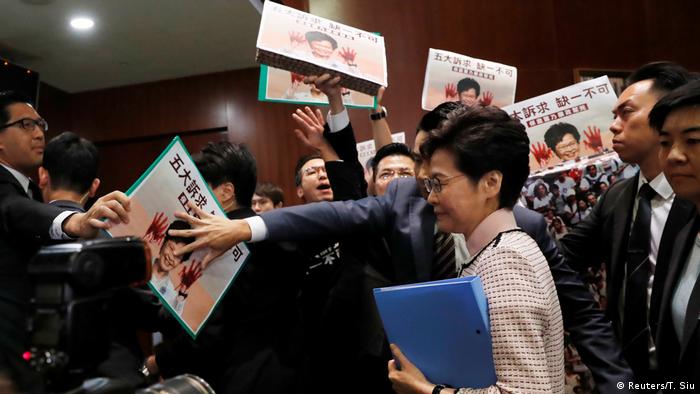 Her plan doesn't seem to have worked. In ignoring the core of the protesters' demands, Lam was again unable to do anything to change the impression of many Hong Kongers that she is more than just a puppet of Beijing. Calls are growing louder for her resignation.

By choosing to maintain a hard-line course, which her detractors say is steered by her political masters in Beijing, Lam propagated the status quo, which has been driving the nearly non-stop protests since June.

"Despite the stormy times and overwhelming difficulties Hong Kong is experiencing, I believe that so long as we accurately adhere to the principle of 'One Country, Two Systems,' we will be able to get out of the impasse," Lam said in the recording.

"Lam tried to boost her administration's popularity through new policies, but since she has very little credibility, many people hate her," said Ma Ngok, a politics professor at the Chinese University of Hong Kong.

"She is bound by many limitations, and if she can't change her bureaucratic mindset, she won't achieve any breakthroughs."

Institutional chaos and violence in the streets

On Thursday, Lam was again forced to leave the legislative chamber after chaos broke out during a question-and-answer session.  Opposition lawmakers shouted and waved placards demanding an investigation into a brutal attack on pro-democracy leader Jimmy Sham.

According to Sham's organization, the Civil Rights Human Front (CRHF), the activist was attacked with knives and hammers Wednesday night by unknown assailants, leaving him conscious but bleeding on the street with head injuries.

CRHF is the organization that has helped bring up to 2 million Hong Kongers to the streets in the ongoing protest movement.

Pro-democracy lawmaker Claudia Mo told reporters the attack was a signal to intimidate other demonstrators ahead of calls for a new mass demonstration on Sunday.

"Regardless of the identity, ethnicity, skin color of the perpetrators, the root of the problem is the violence of the regime and the political system. Let's not forget, the more people we unite, the greater the hope of victory we see," the CRHF wrote in a statement after the attack.

All sides turning on Lam

After Lam's failed policy address, there are indications the leader is also losing confidence of pro-establishment lawmakers.

"Since Lam has a very low popularity, pro-establishment lawmakers also did not dare to support her policy address. Rather, they decided to take a more critical attitude towards her proposed policies," said Ma.

Discontent with Lam and pro-establishment lawmakers could be reflected in district council elections planned for November.

"The election is what the government really cares about, as it affects power relations in local politics," said Ma.

Although Hong Kongers cannot directly elect the chief executive, representatives for Hong Kong's 18 districts are elected by the people.

"It is likely for Hong Kong people to punish the pro-establishment camp with their votes, but their votes can't really punish Carrie Lam."

In September, Lam made a belated attempt to calm the demonstrations by formally withdrawing the extradition bill, which had originally sparked the protests in June. But critics say the move was too little, too late. The scope of the demonstrations has since expanded into a much larger culture of dissent against Hong Kong's government and the perception of Beijing's growing influence over the semiautonomous region.

The pro-democracy movement has presented "five demands," which include direct elections and an independent commission to investigate violence by police against demonstrators.

Lam has repeated throughout the demonstrations that she will not respond to destruction or violence by accommodating protesters' demands.

In response to more radical measures by demonstrators, Hong Kong authorities have in recent weeks tried to tighten the screws, for example, by imposing a ban on masks.

Although the mask law makes it easier for police to arrest and charge any individual considered to have broken the law, increased police action also serves to embolden demonstrators and further exacerbate divisions.

However, Ma said the pro-democracy demonstrators are also beginning to realize the limitations of violent protest.

Demonstrators are increasingly convinced Hong Kong's chief executive is being steered on a course of escalation by Beijing.

As more protests are planned for Sunday, Lam and Hong Kong's leadership are running out of options to put out a wildfire of discontent and disorder that is showing no sign of slowing down.

For weeks now, hundreds of thousands of people have demonstrated in Hong Kong against the increasing influence of the Beijing government over their region. People in mainland China, however, have little sympathy. (19.08.2019)

Hong Kong has passed a new regulation threatening punishment for any protesters caught wearing masks. Expert Willy Lam told DW that the move could have grave consequences for the future of civil liberties in Hong Kong. (04.10.2019)